The Shetland pony is a Scottish breed of pony originating in the Shetland Isles in the north of Scotland. It may stand up to 107 cm (42 in) at the withers. It has a heavy coat and short legs, is strong for its size, and is used for riding, driving, and pack purposes. 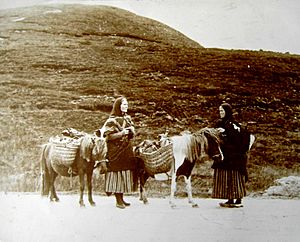 Two women of the Shetland Isles with ponies: photograph taken about 1900

Shetland ponies originated in the Shetland Isles, located northeast of mainland Scotland. Small horses have been kept in the Shetland Isles since the Bronze Age. People who lived on the islands probably later crossed the native stock with ponies imported by Norse settlers. Shetland ponies also were probably influenced by the Celtic pony, brought to the islands by settlers between 2000 and 1000 BCE. The harsh climate and scarce food developed the ponies into extremely hardy animals.

Shetland ponies were first used for pulling carts and for carrying peat, coal and other items, and ploughing land. Then, as the Industrial Revolution increased the need for coal in the mid-nineteenth century, thousands of Shetland ponies travelled to mainland Britain to be pit ponies, working underground hauling coal, often for their entire (often short) lives. Coal mines in the eastern United States also imported some of these animals. The last pony mine in the United States closed in 1971.

A number of pony breeds derive from the traditional Shetland. These include the American Shetland Pony and Pony of the Americas in the United States, and the Deutsches Classic Pony in Germany. 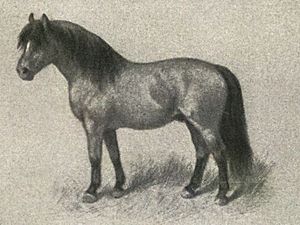 The Shetland Pony is hardy and strong, in part because it developed in the harsh conditions of the Shetland Isles. It has a small head, widely spaced eyes and small and alert ears. It has a short muscular neck, a compact stocky body, short strong legs and a shorter-than-normal cannon-bone in relation to its size. A short broad back and deep girth are universal characteristics, as is a springy stride. It has a long thick mane and tail, and a dense double winter coat to withstand harsh weather. It may be of any known horse coat colour other than spotted.

It is not unusual for a Shetland pony to live more than 30 years.

A Shetland pony in harness. 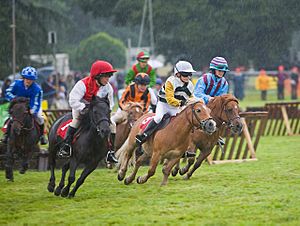 Today, Shetlands are ridden by children and are shown by both children and adults at horse shows in harness driving classes as well as for pleasure driving outside of the show ring. Shetlands are ridden by small children at horse shows, in riding schools and stables as well as for pleasure. They are seen working in commercial settings such as fairs or carnivals to provide short rides for visitors. They are also seen at petting zoos and sometimes are used for therapeutic horseback riding purposes. In the United Kingdom, Shetlands are also featured in the Shetland Pony Grand National, galloping around a racecourse with young jockeys. A few Shetland ponies are still fulfil traditional working roles on the islands, and can be seen carrying peat (which is abundant and used as a fuel source in Shetland) cut from the hillsides in large saddlebags. Their strong physique and ability to cross a variety of difficult terrain types means they are still a viable choice for the job, even in an age of mechanised agriculture.

Junior Harness Racing was founded in Queensland by a group of breeders to give young people aged 6–16 an opportunity to obtain a practical introduction to the harness racing industry. The children have the opportunity to drive Shetland ponies in harness under race conditions. No prize money is payable on pony races, although winners and place-getters receive medallions.

Miniature Shetlands have been trained as guide horses to take the same role as guide dogs. This task is also performed by other miniature horse breeds.

All content from Kiddle encyclopedia articles (including the article images and facts) can be freely used under Attribution-ShareAlike license, unless stated otherwise. Cite this article:
Shetland pony Facts for Kids. Kiddle Encyclopedia.