A herd of Exmoor ponies

The Exmoor pony is a horse breed native to the British Isles, where some still roam as semi-feral livestock on Exmoor, a large area of moorland in Devon and Somerset in southwest England. The Exmoor has been given "endangered" status by the Rare Breeds Survival Trust, and "threatened" status by The Livestock Conservancy. It is one of the British Isles' mountain and moorland pony breeds, having conformation similar to that of other cold-weather-adapted pony breeds. The Exmoor pony is hardy and used for a variety of equestrian activities. In its free-roaming state, the breed's presence on Exmoor contributes to the conservation and management of several natural pasture habitats. 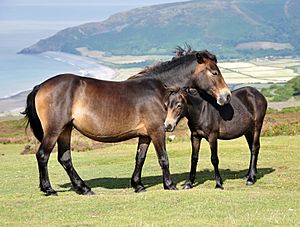 An Exmoor mare and foal

Exmoor ponies are usually a variant of dark bay, called "brown", with pangaré ("mealy") markings around the eyes, muzzle, flanks, and underbelly. Pangaré markings occur in other equines as well as horses, and are considered to be a primitive trait. Entry in the breed registry requires that the animal have no white markings. They usually stand 11.1 to 12.3 hands (45 to 51 inches, 114 to 130 cm), with the recommended height limit for mares being 12.2 hands (50 inches, 127 cm) and that for stallions and geldings 12.3 hands (51 inches, 130 cm).However exmoors may be taller than this limit with some reaching 13.2hh

With a stocky, powerful build, the Exmoor pony is strong for its height, and noted for its hardiness and endurance. The chest is deep and the back broad, the croup level. The legs are short, with good bone and hard hooves. Although many sources state that the Exmoor has a distinctly different jaw structure from other horse breeds, which includes the beginnings of development of a seventh molar, this is a misunderstanding based on an incorrect translation of a German study. The study, when properly translated, refers to a feature, found in multiple horse breeds and perhaps all animals with sizable lower jaws, that appears to be an extra branch of blood supply in the area. While an extra tooth may have eventually developed from this extra blood supply, its frequency among the general horse population makes its appearance in the Exmoor pony unremarkable.

The head is somewhat large in proportion to the body, with small ears, and has a unique feature called a "toad eye" caused by extra fleshiness of the eyelids, which helps to deflect water and provide extra insulation. As with most cold-weather pony breeds, the Exmoor grows a winter coat consisting of a highly insulating woolly underlayer and a topcoat of longer, oily hairs that prevent the undercoat from becoming waterlogged by diverting water down the sides of the animal to fall from just a few drip areas. The mane and tail are thick and long, and the dock of the tail is of a type common in cold-weather ponies, having coarse hairs, called a "frost cap," "snow chute," or "ice tail" that deflects rainwater away from the groin and underbelly areas to fall from the long hairs on the back of the hind legs. 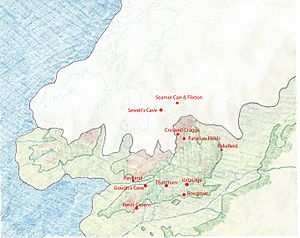 Ice Age map of the peninsula from which the British Isles were formed, showing find sites for Pleistocene and Holocene horse remains

Exmoor fanciers claim the breed is directly descended from an isolated population of wild ancestors bred pure since the Ice Age, and thus more than 10,000 years old. Modern DNA research to date has not supported that traditionally held view of the origin of the Exmoor pony however, as existing studies indicate they share their maternally inherited mitochondrial DNA with various other horse breeds from across the world, and their paternally inherited Y-chromosome is identical to that of most other domesticated horses.

However, horses have been present in Britain for hundreds of thousands of years. Two species of wild horse were identified from remains at Pakefield, East Anglia, dating back to 700,000 BC, and spear damage on a horse shoulder bone discovered at Eartham Pit, Boxgrove, dated 500,000 BC, showed that early humans were hunting horses in the area at that time. Horse remains from about 50,000 BC have been recovered from Kent's Cavern in nearby Torquay, remains dating from around 7,000 BC have been found in Gough's Cave in Cheddar Gorge, less than 50 miles (80 km) from Exmoor, subfossil horse tracks have been found in the Bristol Channel / Severn Estuary area, and pre-domesticated horse bones have been found in Severn-Cotswold chamber tombs dating to 3500 BC.

All content from Kiddle encyclopedia articles (including the article images and facts) can be freely used under Attribution-ShareAlike license, unless stated otherwise. Cite this article:
Exmoor pony Facts for Kids. Kiddle Encyclopedia.