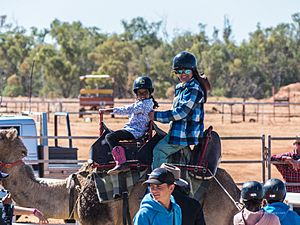 Kid having a camel ride at the Boulia Turf Club, Queensland 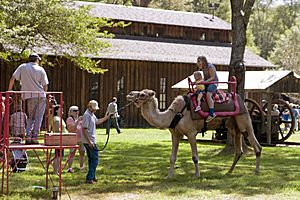 The dromedary camel (Camelus dromedarius) also called the Arabian camel, is a large even-toed ungulate, of the genus camelus, with one hump on its back.

The species' distinctive features include its long, curved neck, narrow chest, a single hump (compared with two on the Bactrian camel and wild Bactrian camel), and long hairs on the throat, shoulders and hump. The coat is generally a shade of brown. The hump, 20 cm (7.9 in) tall or more, is made of fat bound together by fibrous tissue.

Dromedaries are mainly active during daylight hours. They form herds of about 20 individuals, which are led by a dominant male.

This camel feeds on foliage and desert vegetation; several adaptations, such as the ability to tolerate losing more than 30% of its total water content, allow it to thrive in its desert habitat.

Females bear a single calf after a gestation of 15 months.

The dromedary has not occurred naturally in the wild for nearly 2,000 years. It was probably first domesticated in the Arabian Peninsula about 4,000 years ago, or in Somalia where there are paints in Laas Geel that figure it from more than 5,000 to 9,000 years ago. In the wild, the dromedary inhabited arid regions, including the Sahara Desert. The domesticated dromedary is generally found in the semi-arid to arid regions of the Old World, mainly in Africa and the Arabian Peninsula, and a significant feral population occurs in Australia.

Products of the dromedary, including its meat and milk, support several north Arabian tribes; it is also commonly used for riding and as a beast of burden.

The dromedary shares the genus Camelus with the Bactrian camel (C. bactrianus) and the wild Bactrian camel (C. ferus). The dromedary belongs to the family Camelidae. The ancient Greek philosopher Aristotle (4th century BC) was the first to describe the species of Camelus. He named two species in his History of Animals; the one-humped Arabian camel and the two-humped Bactrian camel. The dromedary was given its current binomial name Camelus dromedarius by Swedish zoologist Carl Linnaeus in his 1758 publication Systema Naturae. 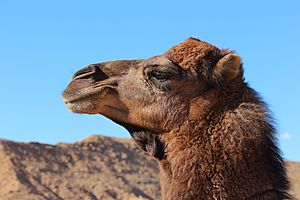 This camel has thick, double-layered eyelashes and bushy eyebrows (Algeria) 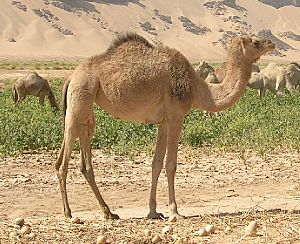 The dromedary has a long curved neck, single hump and long hair on the throat, shoulders and hump

They have sharp vision and a good sense of smell.

The male has a soft palate (dulaa in Arabic) nearly 18 cm (7.1 in) long, which it inflates to produce a deep pink sac. The palate, which is often mistaken for the tongue, dangles from one side of the mouth and is used to attract females during the mating season.

The coat is generally brown but can range from black to nearly white. The hair is long and concentrated on the throat, shoulders and the hump.

The large eyes are protected by prominent supraorbital ridges; the ears are small and rounded.

The dromedary has long, powerful legs with two toes on each foot. The feet resemble flat, leathery pads. Like the giraffe, dromedaries moves both legs on one side of the body at the same time.

Compared with the Bactrian camel, the dromedary has a lighter build, longer limbs and shorter hairs.

Herd of dromedaries in the Negev, Israel 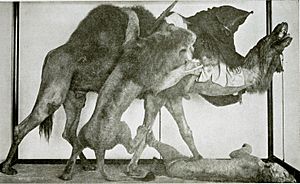 The dromedary's relationships with the lion and mankind is depicted in this taxidermy diorama by Jules and Édouard Verreaux, which is called "Lion Attacking a Dromedary," and was acquired by the Carnegie Museum of Natural History in Pittsburgh, in 1898.

The dromedary is diurnal (active mainly during daylight); free-ranging herds feed and roam throughout the day, though they rest during the hottest hours around noon. The night is mainly spent resting.

Dromedaries form groups of about 20 individuals, which consist of several females led by a dominant male. Females may also lead in turns. Some males either form bachelor groups or roam alone. Herds may congregate to form associations of hundreds of camels during migrations at the time of natural disasters.

Special behavioral features of the dromedary include snapping at others without biting them and showing displeasure by stamping their feet. They are generally non-aggressive.

Camels scratch parts of their bodies with their legs or with their lower incisors. They may also rub against tree bark and roll in the sand. 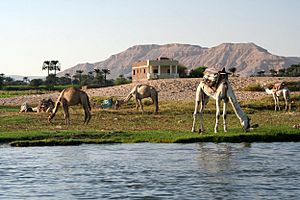 In the Sahara, 332 plant species have been recorded as food plants of the dromedary.

Dromedaries keep their mouths open while chewing thorny food. They use their lips to grasp the food and chew each bite 40 to 50 times.

They graze for 8–12 hours per day and ruminate for an equal amount of time. 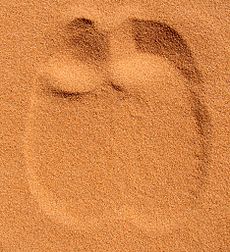 The dromedary is specially adapted to its desert habitat; these adaptations are aimed at conserving water and regulating body temperature.

The bushy eyebrows and the double row of eyelashes prevent sand and dust from entering the eyes during strong windstorms, and shield them from the sun's glare.

The dromedary is able to close its nostrils voluntarily; this assists in water conservation.

The dromedary can conserve water by reducing perspiration by fluctuating the body temperature throughout the day. In the hottest temperatures, the dromedary takes water every four to seven days. This camel has a quick rate of rehydration and can drink at 10–20 L (2.2–4.4 imp gal) per minute.

The hump stores up to 80 lb (36 kg) of fat, which the camel can break down into energy to meet its needs when resources are scarce; the hump also helps get rid of body heat.

Though the padded hooves effectively support the camel's weight on the ground, they are not suitable for walking on slippery and muddy surfaces. 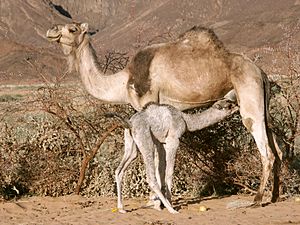 A single calf is born after a gestation period of 15 months. Calves move freely by the end of their first day. Nursing and maternal care continue for one to two years. 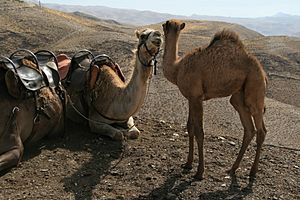 A pair of camels and calf in Israel 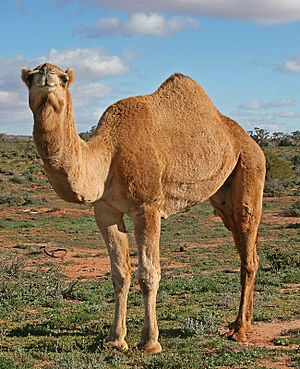 A dromedary in outback Australia, near Silverton, New South Wales, Australia. Feral dromedaries are only found in Australia.

In the early 21st century, the domesticated dromedary is found in the semi-arid to arid regions of the Old World.

Africa has more than 80% of the world's total dromedary population; it occurs in almost every desert zone in the northern part of the continent.

In Asia, nearly 70% of the population occurs in India and Pakistan.

Nearly 99% of the populations are feral, and they have annual growth rate of 10%. Most of the Australian feral camels are dromedaries, with only a few Bactrian camels.

Most of the dromedaries occur in Western Australia, with smaller populations in the Northern Territory, Western Queensland and northern South Australia.

The strength and docility of the dromedary make it popular as a domesticated animal. According to Richard Bulliet, they can be used for a wide variety of purposes: riding, transport, ploughing, and trading and as a source of milk, meat, wool and leather. The main attraction of the dromedary for nomadic desert-dwellers is the wide variety of resources they provide, which are crucial for their survival. It is important for several Bedouin pastoralist tribes of northern Arabia, such as the Ruwallah, the Rashaida, the Bani Sakhr and the Mutayr. 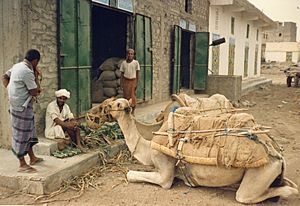 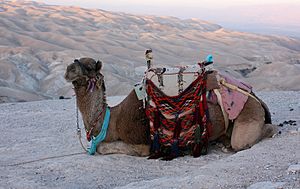 The dromedary has been used in warfare since the 2nd century BC. It is particularly prized for its capability to outrun horses in the deserts.

The dromedary also remains popular for racing, particularly in the Arab world.

Draught camels are used for several purposes including ploughing, processing in oil mills and pulling carts. 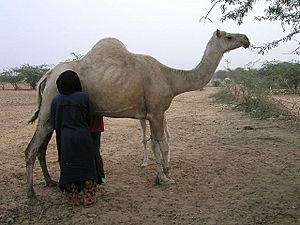 Dromedary being milked in Niger

Camel milk is a staple food of nomadic tribes living in deserts.

Cheese and other dairy products can be made from camel milk. 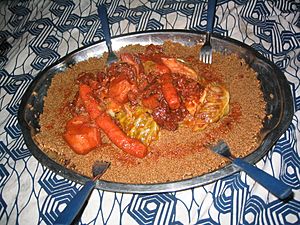 Meat of dromedary served as food

Camel meat is often eaten by African camel herders, who use it only during severe food scarcity or for rituals. Camel meat is processed into food items such as burgers, patties, sausages and shawarma. Dromedaries can be slaughtered between four and ten years of age. As the animal ages, the meat grows tougher and deteriorates in taste and quality. In Somalian and Djiboutian culture, the dromedary is a staple food and can be found in many recipes and dishes.

Camels in hot climates generally do not develop long coats. Camel hair is light, and has low thermal conductivity and durability, and is thus suitable for manufacturing warm clothes, blankets, tents, and rugs. Hair of highest quality is typically obtained from juvenile or wild camels.

All content from Kiddle encyclopedia articles (including the article images and facts) can be freely used under Attribution-ShareAlike license, unless stated otherwise. Cite this article:
Dromedary Facts for Kids. Kiddle Encyclopedia.