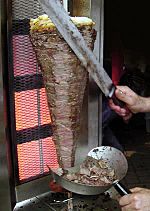 Shawarma meat being cut. The meat is roasted in a special oven before making it into a sandwich.

Shawarma (Arabic: شاورما‎code: ar is deprecated ; in Turkish: Çevirme) is a meat sandwich eaten by people in the Middle East. It is served in round Arabic bread with meat and vegetables, with some spice or sauce of choice, in it. Normally, the meat can either be lamb, beef, turkey, or chicken. Shawarma can also be spelled chawarma, shwarma, shawerma, or shoarmais.

It was first introduced by people from Turkey. They call it çevirme, which means "turning", because the meat can be turned around in the oven, but the Arabs changed its recipe from the Turkish Doner kebab.

All content from Kiddle encyclopedia articles (including the article images and facts) can be freely used under Attribution-ShareAlike license, unless stated otherwise. Cite this article:
Shawarma Facts for Kids. Kiddle Encyclopedia.