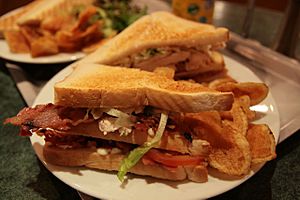 A double decker toasted sandwich containing bacon, tomato, lettuce and egg served with crisps on a white porcelain plate. This sandwich very likely has mayonnaise spread on it instead of or in addition to butter. A similar sandwich is shown in the background but this has salad instead of crisps. Both plates are on a tray, which is on a grey marble or marble-effect counter top. 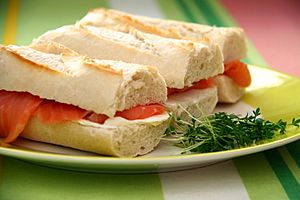 Salmon-and-cream-cheese sandwiches on pieces of baguette 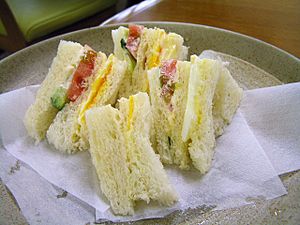 English sandwiches, crustless on a plate 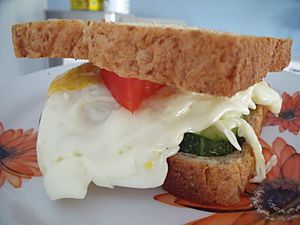 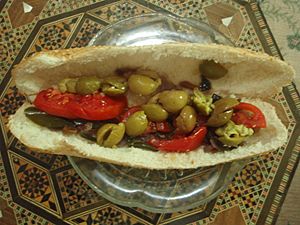 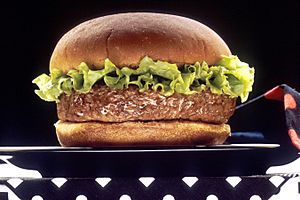 A sandwich is a food prepared by placing different kinds of foods between two pieces of bread. The pieces of bread in a sandwich are referred to as slices or sheets of bread. The snack is thought to have been made first for the Earl of Sandwich, hence the name. Many people enjoy the sandwich as it is easy and quick to make in a hurry. Also, the sandwich can be easily eaten with one hand without utensils which allows consumers to have a hand free to do other things. Some people prefer to eat a sandwich with both hands.

In many countries, children eat sandwiches for lunch at school. The sandwiches are put in a lunchbox and often wrapped in cling film to keep them fresh.

A sandwich with only one slice of bread is called an open sandwich or an open-face sandwich. The filling is placed on top of the bread. An open sandwich is often eaten with a knife and fork, although it can be picked up and eaten by hand.

Sandwiches made with different types of bread might be given unique names. A panini, for example, is usually a sandwich on a small roll or loaf which is pressed between two heavy, heated grill plates.

Sandwiches can also be called by many other names in different parts of the world such as 'grinder', 'sub', 'hoagie' and 'wedge'.

There are many different types of sandwiches. Examples are:

There are many types of filling that can be placed within a sandwich. These include:

In one episode of The Apprentice, the apprentices were required to make sandwiches for Donald Trump.

In the French film Taxi the protagonist is made a special sandwich with half Bayonne ham, half Paris. This later sparks the jealousy of another character.

In the Warner Brothers cartoon Scooby Doo, Scooby was well known to love making sandwiches with Shaggy having many layers, often with a great variety of fillings.

In the television series Buffy, during episode 61, Buffy eyes a classmate eating a sandwich, snatches it and hungrily scarfs it down.

In the television series Star Trek, Scotty used the word sandwich to refer to the makeup of a piece of technology which was made of three layers of two materials, which caused the food synthesizer in the galley of the USS Enterprise to believe that he was requesting a meal. Scotty canceled the process by kicking the offending unit.

The largest sandwich ever made was made by Wild Woody's Chill and Grill, Roseville, Michigan. It weighed 5,440 lbs.

All content from Kiddle encyclopedia articles (including the article images and facts) can be freely used under Attribution-ShareAlike license, unless stated otherwise. Cite this article:
Sandwich Facts for Kids. Kiddle Encyclopedia.