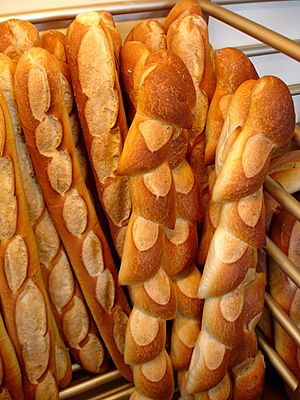 Baguettes are long thin loaves of bread popular in France, but now common in many other countries. Usually, they are made of white bread. Baguettes usually have a hard crust on the outside but soft white bread on the inside.

French traditions say that bread may only contain the following four things: flour, water, yeast and salt. Anything containing more than those things must not be called bread.

A baguette is about 5-6 cm wide, 3 to 4 cm high, and about 65 cm long. Such a baguette usually weighs about 250 grams. It is common to dip the bread into olive oil when it is eaten.

The baguette is thought as to have come from France, but it actually came from Vienna. In the middle of the nineteenth century, steam ovens had just been brought into use. This allowed loaves to be made with a crispy crust and the white centre, similar to today's baguettes.

Later, in 1920, a law was passed that did not let bakers work before 4am. This made it impossible to make a larger loaf in time for their customers' breakfasts. The longer, thinner baguette helped solve this problem because it could be prepared and baked much faster. However, since the French had been making long thin loaves for a long time, what exactly was invented in 1920? It seems to be just the use of the word "baguette" for those thin loaves.

Outside France, the baguette is also called a 'French stick'. It is a loaf of bread, up to a metre long but only about four to five centimetres in diameter. The baguette is a symbol of France.

Baguettes are eaten as a sandwich cut in half lengthwise. They are also eaten for breakfast (usually with jam or chocolate spread).

A loaf the same length as a baguette but thicker (about 8-10 centimetres diameter) is known as 'pain'. A thin version of the baguette is called 'ficelle'.

Even in France there is a difference between a traditional baguette and a 'supermarket' baguette.

It is also eaten in places like Algeria and former French Colonial countries.

All content from Kiddle encyclopedia articles (including the article images and facts) can be freely used under Attribution-ShareAlike license, unless stated otherwise. Cite this article:
Baguette Facts for Kids. Kiddle Encyclopedia.