A toasted sandwich, grilled cheese sandwich, cheese toastie, or grilled cheese is a hot sandwich (toastie) made with one or more varieties of cheese (a cheese sandwich) on bread. It is typically prepared by heating one or more slices of cheese between slices of bread, with a cooking fat such as butter, on a frying pan, griddle, or sandwich toaster, until the bread browns and the cheese melts. A grilled cheese may contain separate ingredients, though the main ingredients remain the bread and cheese. 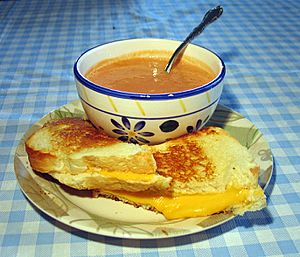 A grilled cheese sandwich is assembled by creating a cheese filling, often cheddar, or American, between two slices of bread, and is then heated until the bread browns and the cheese melts. A layer of butter or mayonnaise is sometimes added to the outside of the bread for additional flavor and texture. Some may add additional ingredients, such as peppers, tomatoes, or onions. Several different methods of heating the sandwich are used, depending on the region and personal preference. Common methods include being cooked on a griddle, fried in a pan, or made in a panini grill or sandwich toaster. This last method is more common in the United Kingdom, where the sandwiches are normally called "toasted sandwiches" or "toasties", in Australia, where they are called "jaffles", and South Africa, where they are called “snackwiches”. Other methods such as baking in an oven or toaster oven, or in a toasting bag in an electric toaster, may be employed.

The sandwich is typically served as a snack or lunchtime meal, often with a side of salad, soup, french fries, or other accompaniment. 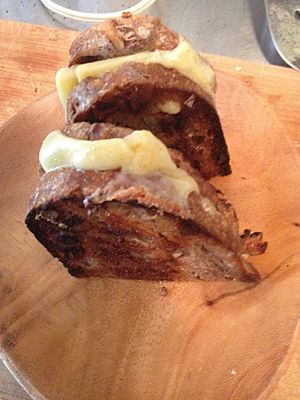 To retain the crunchiness of the bread, this grilled cheese sandwich is set on its end. It is made of sharp cheddar cheese, walnut bread, and butter.

The Guinness World Record for the most expensive, commercially available sandwich is held by a $214 grilled cheese sandwich, the "Quintessential Grilled Cheese", by Serendipity 3 in New York, USA.

The film Chef features an extended scene where the eponymous protagonist eats a grilled cheese.

All content from Kiddle encyclopedia articles (including the article images and facts) can be freely used under Attribution-ShareAlike license, unless stated otherwise. Cite this article:
Grilled cheese Facts for Kids. Kiddle Encyclopedia.