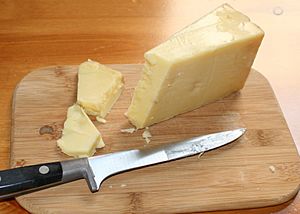 Cheddar is a type of hard cheese made from cow's milk. It originally was produced in the English village of Cheddar in Somerset. Romans may have brought the recipe to Britain from the Cantal region of France. The first record of cheddar cheese dates back to the 12th century. In 1170, King Henry II bought 10,240 lb (4,640 kg) at a farthing per pound. Charles I (1600–1649) also bought cheese from Somerset. Cheddar cheese traditionally had to be made within 30 miles (48 km) of Wells Cathedral. 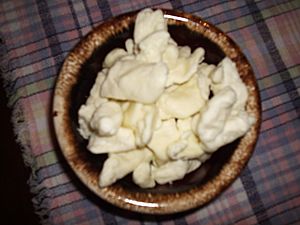 A bowl of cheese curds

Cheddar cheese is different from other cheeses in how it is made. After the curds are heated, they are cut and stacked. The stacks are then turned periodically and re-stacked. This process is called cheddaring. Cheddar cheese is sometimes aged in caves for up to 30 months before it is ready to eat.

"Cheddaring" refers to an additional step in the production of Cheddar cheese where, after heating, the curd is kneaded with salt, cut into cubes to drain the whey, and then stacked and turned. Strong, extra-mature Cheddar, sometimes called vintage, needs to be matured for up to 15 months. The cheese is kept at a constant temperature, often requiring special facilities. As with other hard cheese varieties produced worldwide, caves provide an ideal environment for maturing cheese; still, today, some Cheddar cheese is matured in the caves at Wookey Hole and Cheddar Gorge. Additionally, some versions of Cheddar cheese are smoked. 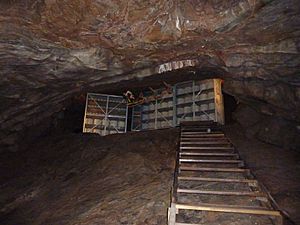 Cheddar cheese maturing in the caves at Cheddar Gorge 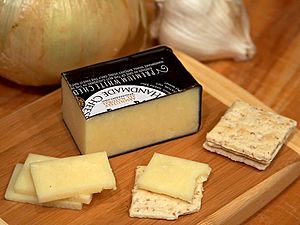 Cheddar cheese is the most popular cheese in the United Kingdom. It accounts for 51 percent of the country's £1.9 billion annual cheese market. It is the second most popular cheese in the United States, behind mozzarella, with an average annual consumption of 10 lb (4.5 kg) per person. The United States produced 3,233,380,000 lbs in 2010, and the UK 258,000 tonnes in 2008. The name "cheddar cheese" is widely used and has no protection within the European Union. Only cheddar produced from local milk within four counties of South West England may use the name "West Country Farmhouse Cheddar."

During the Second World War, and for nearly a decade after, most milk in Britain was used for the making of one single kind of cheese nicknamed "government Cheddar" as part of war economies and rationing. This almost resulted in wiping out all other cheese production in the country. Before the First World War, more than 3,500 cheese producers were in Britain; fewer than 100 remained after the Second World War.

According to a United States Department of Agriculture researcher, Cheddar cheese is the world's most popular variety of cheese, and the most studied type of cheese in scientific publications. 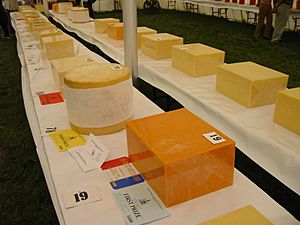 Cheddar cheeses on display at the Mid Somerset Show

The ideal quality of the original Somerset Cheddar was described by Joseph Harding in 1864 as "close and firm in texture, yet mellow in character or quality; it is rich with a tendency to melt in the mouth, the flavour full and fine, approaching to that of a hazelnut".

Cheddar made in the classical way tends to have a sharp, pungent flavour, often slightly earthy. The "sharpness" of cheddar is associated with the levels of bitter peptides in the cheese. This bitterness has been found to be significant to the overall perception of the aged Cheddar flavor. The texture is firm, with farmhouse traditional Cheddar being slightly crumbly; it should also, if mature, contain large cheese crystals consisting of calcium lactate – often precipitated when matured for times longer than six months.

Cheddar can be a deep to pale yellow (off-white) colour, or a yellow-orange colour when certain plant extracts are added. One commonly used spice is annatto, extracted from seeds of the tropical achiote tree. Originally added to simulate the colour of high-quality milk from grass-fed Jersey and Guernsey cows, annatto may also impart a sweet, nutty flavour. The largest producer of Cheddar cheese in the United States, Kraft, uses a combination of annatto and oleoresin paprika, an extract of the lipophilic (oily) portion of paprika.

Cheddar cheese was sometimes (and still can be found) packaged in black wax, but was more commonly packaged in larded cloth, which was impermeable to contaminants, but still allowed the cheese to "breathe".

All content from Kiddle encyclopedia articles (including the article images and facts) can be freely used under Attribution-ShareAlike license, unless stated otherwise. Cite this article:
Cheddar cheese Facts for Kids. Kiddle Encyclopedia.