The Jersey is a British breed of small dairy cattle from Jersey, in the British Channel Islands. It is one of three Channel Island cattle breeds, the others being the Alderney – now extinct – and the Guernsey. It is highly productive – cows may give over 10 times their own weight in milk per lactation; the milk is high in butterfat and has a characteristic yellowish tinge.

The Jersey adapts well to various climates and environments, and unlike many breeds originating in temperate climates, these cows can tolerate heat very well. It has been exported to many countries of the world; in some of them, including Denmark, France, New Zealand, and the United States, it has developed into an independent breed. In Nepal, it is used as a draught animal.

History of the breed

Jersey cattle being judged at a show in Jersey, home of the breed 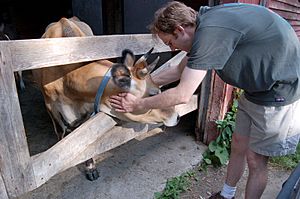 Jersey cows are well known as curious and gentle cattle.

As its name implies, the Jersey was bred on the British Channel Island of Jersey. It apparently descended from cattle stock brought over from the nearby Norman mainland, and was first recorded as a separate breed around 1700.

Before 1789, cows would be given as dowry for inter-island marriages between Jersey and Guernsey. This was, however, not widespread.

In 1789, imports of foreign cattle into Jersey were forbidden by law to maintain the purity of the breed, although exports of cattle and semen have been important economic resources for the island. The restriction on the import of cattle was initially introduced to prevent a collapse in the export price. The United Kingdom levied no import duty on cattle imported from Jersey. Cattle were being shipped from France to Jersey and then shipped onward to England to circumvent the tariff on French cattle. The increase in the supply of cattle, sometimes of inferior quality, was bringing the price down and damaging the reputation of Jersey cattle. The import ban stabilised the price and enabled a more scientifically controlled programme of breeding to be undertaken.

Sir John Le Couteur studied selective breeding and became a Fellow of the Royal Society; his work led to the establishment of the Royal Jersey Agricultural and Horticultural Society in 1833. At that time, the breed displayed greater variation than it does today, with white, dark brown, and mulberry beasts. However, since the honey-brown cows sold best, the breed was developed accordingly. In 1860, 1,138 cows were exported via England, the average price being £16 per head. By 1910, over 1,000 head were exported annually to the United States alone. It is now the fastest-growing dairy breed in the world.

On 1866, at the annual general meeting of the Royal Jersey Agricultural and Horticultural Society, H.G. Shepard noted in his history that "it was resolved – on the motion of Col. Le Couteur, that the Hon. Secretary be hereby invited to open and to carry on a "herd book" in which the pedigree of bulls, cows, and heifers shall be entered for reference to all the members of the Society." In 1869 for the first time, prizes were awarded at the society's shows for herd book stock cattle.

In July 2008, the States of Jersey took the historic step of ending the ban on imports, and allowing the import of bull semen from any breed of cattle, although only semen that is genetically pure enables the resultant progeny to be entered in the Jersey Herd Book. For many decades, each of the 12 parishes in Jersey would hold cattle shows in the spring, summer, and autumn, followed in turn by the main shows held by the Royal Jersey Agricultural and Horticultural Society, where the best of the parish shows would compete. The colour of the rosette secured by a prize-winning cow was said to determine its export value. Today, the RJAHS holds two shows a year, where usually five or six of the remaining 23 herds compete against each other for the top prizes. A Jersey cattle show is also held in Jersey, by the West Show Association.

In February 2010, semen from an impure breed Jersey bull had been imported into the island despite strict laws and checks, and 100 cows had been impregnated with the semen. Their offspring will not be recorded in the Jersey Herd Book.

Jersey cattle were exported to the United States from about 1850. A breed society, the American Jersey Cattle Club, was formed in 1868. In the USA, a distinction is sometimes made between the "American Jersey", which is comparatively coarse and large and has been selectively bred mainly for milk yield, and the original or "Island" type; the latter may also be called "Miniature Jersey".

The Jersey cow ranges from 400 to 500 kilograms (880 to 1,100 lb). Factors contributing to the popularity of the breed have been their greater economy of production, due to:

Jerseys occur in all shades of brown, from light tan to almost black. They are frequently fawn in colour. All purebred Jerseys have a lighter band around their muzzles, a dark switch (long hair on the end of the tail), and black hooves, although in recent years, colour regulations have been relaxed to allow a broadening of the gene pool.

The cows are calm and docile; bulls may be unpredictable or aggressive.

Jersey cattle have a greater tendency towards postparturient hypocalcaemia (or "milk fever") in dams, and tend to have frail calves that require more attentive management in cold weather than other dairy breeds due to their smaller body size (which results in an increased surface area-to-mass ratio, increasing heat loss). 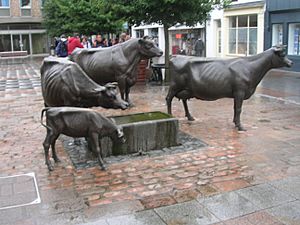 Sculpture by John McKenna, unveiled in 2001 and on display at West's Center, St Helier

All content from Kiddle encyclopedia articles (including the article images and facts) can be freely used under Attribution-ShareAlike license, unless stated otherwise. Cite this article:
Jersey cattle Facts for Kids. Kiddle Encyclopedia.