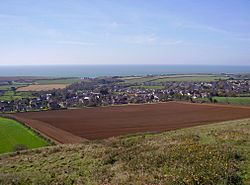 View of Brighstone from Limerstone Down, looking south-west, with the English Channel in the distance 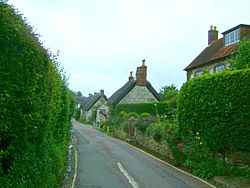 Brighstone is a village and civil parish on the Isle of Wight, 6 miles southwest of Newport on the B3399 road. Brighstone was previously known as "Brixton". The name derives from the Saxon name "Ecgbert's Tun".

Brighstone is the largest village in the area locally known as the Back of the Wight and extends toward Limerstone and Mottistone. In Roman times a villa was built to the north, to take advantage of the clean waters of the Buddle Brook.

Brighstone history dates back to the 9th century when it was given to the Bishopric of Winchester by King Egbert.

Brighstone parish was formed in 1644. The civil parish comprises the main village of Brighstone together with the smaller villages of Brook, Hulverstone, Limerstone and Mottistone. The entire parish lies within an area of the Isle of Wight AONB and its coastline is designated as Heritage Coast and Site of Special Scientific Interest.

St. Mary's Church, Brighstone is a venerable old church that has stood for more than eight centuries. The village also features Brighstone Shop and Museum, owned by the National Trust, displaying exhibitions on village life in the 19th century and contains a wealth of information about the Brighstone lifeboats.

Brighstone is popular with tourists for its thatched cottages and local shops. Several large events are hosted in the village each year, including the Brighstone Show, Art exhibitions and the Brighstone Christmas Tree Festival. The local scout hut functions as a Youth Hostel during the summer.

The village is linked to other parts of the island by Southern Vectis bus route 12, serving Freshwater, Totland and Newport as well as intermediate villages.

All content from Kiddle encyclopedia articles (including the article images and facts) can be freely used under Attribution-ShareAlike license, unless stated otherwise. Cite this article:
Brighstone Facts for Kids. Kiddle Encyclopedia.