Newport is the county town of the Isle of Wight, an island county off the south coast of England. It is in the civil parish of Newport and Carisbrooke, The town is slightly north of the centre of the island. It has a quay at the head of the navigable section of the River Medina, which flows northwards to Cowes and the Solent. In 2020 it had an estimated population of 26,109. 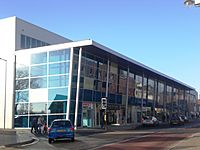 Mousterian remains, featuring tools made by Neanderthals at least 40,000 years ago, were found at Great Pan Farm in the 1970s.

There are signs of Roman settlement in the area, which was probably known as Medina, including two known Roman villas, one of which, Newport Roman Villa, has been excavated and is open to the public.

Information about the area resumes after the Norman Conquest. The first charter was granted in the late 12th century. In 1377 an invading French force burnt down much of the town while attempting to take Carisbrooke Castle, then under the command of Sir Hugh Tyrill. A group of Frenchmen were captured and killed, then buried in a tumulus later nicknamed Noddies Hill, a "noddy" being medieval slang for a body. This was later corrupted to Nodehill, the present-day name for a part of central Newport – a name confusing to many as the area is flat.

In 1648 Charles I and a group of Parliamentary Commissioners concluded the Treaty of Newport, an attempt at reaching a compromise in the Civil War, undermined by Charles's negotiations with the French and Scots to intervene on his behalf. The Treaty was repudiated by Oliver Cromwell upon returning from defeating the Scots at the Battle of Preston. This led to Charles's execution.

The town had been incorporated as a borough in 1608. The town's position as an area of trade accessible to the sea meant it rapidly took over from nearby Carisbrooke as the main central settlement, eventually absorbing the latter as a suburb. The borough ceased to exist in 1974 when it was incorporated into the larger Borough of Medina, which was itself superseded in 1995 by a single unitary authority covering the whole of the Isle of Wight.

Newport since the 1960s has acquired new shopping facilities, a pedestrianised central square, and through road traffic redirected off many of the narrow streets. Newport Quay has been redeveloped with art galleries such as the Quay Arts Centre and new flats converted from old warehouses. 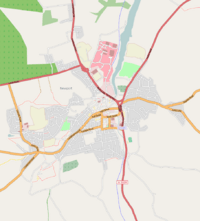 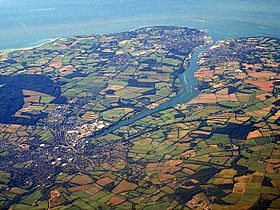 Geographically located in the centre of the Island at 50.701°N, 1.2883°W, Newport is the principal town of the Isle of Wight. Transport connections link all major towns to Newport; it is the main shopping centre and location for public services on the Island. The main A3020 and A3054 roads converge as Medina Way between the busy roundabouts at Coppins Bridge and St Mary's Hospital.

Newport railway station was the hub of the Island's rail network until the mid-20th century, but it closed in 1966 and the site is now occupied by the A3020 Medina Way dual carriageway.

The nearest city to the town is Portsmouth, about 13 miles (21 km) north-east on Portsea Island, adjoining the mainland. More locally, Ryde, the Island's largest town, is to the north-east; Sandown and Shanklin are to the east, and Cowes to the north.

The River Medina runs through Newport; north of its confluence with the Lukely Brook at the town's quay it becomes a navigable tidal estuary. 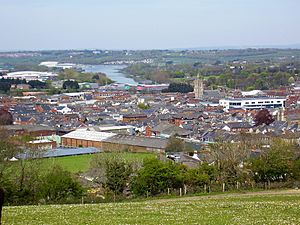 View of Newport from Mount Joy, looking north with the Medina estuary in the distance.

Seaclose Park in Newport, on the east bank of the River Medina, has since 2002 been the location for the revived Isle of Wight Music Festival, held annually.

Newport is home to the Postal Museum, possibly the largest private collection of vintage postal equipment and post boxes in the world.

Newport bus station is the town's central bus terminus, with all routes in the town serving it. Newport is the hub of the Southern Vectis network, with routes from across the Island terminating there. Wightbus also operate services.

St. George's Park is the home of Newport Football Club, the most successful of the Island's football teams, currently playing in the Wessex League. It has a capacity of 3,000. The town is also represented by Newport Cricket Club, who play at Victoria recreational ground, Newport CC have two teams which compete in Harwoods Renault Divisions 1 and 2. The Isle of Wight County Cricket Ground is located at Newclose, on the outskirts of the town.

The town of Newport and adjoining village of Carisbrooke together have seven primary schools, three secondary schools, a sixth form campus, a further education college and two special schools. The primary schools located close to the town centre are Newport C of E Primary and Nine Acres Community Primary. Barton Primary is located on Pan estate, whilst Summerfields Primary is nearby on the Staplers estate, both to the east of the town. Hunnyhill Primary is situated on Forest Road to the north of the town, and there are two primary schools in Carisbrooke - Carisbrooke C of E Primary on Wellington Road and St Thomas of Canterbury Catholic Primary on the High Street in the village centre.

The three secondary schools are Carisbrooke College, Medina College and Christ the King College. Carisbrooke College is located on a large site on the outskirts of Carisbrooke village, whilst Christ the King is just down the road occupying two former middle school sites on opposite sides of Wellington Road. Medina College is situated to the east of the town just off of Fairlee Road, along with Medina Leisure Centre and Medina Theatre. The Island Innovation VI Form Campus is the joint sixth form for Carisbrooke and Medina Colleges and is located in the town centre, on the former Nodehill Middle School site.

All content from Kiddle encyclopedia articles (including the article images and facts) can be freely used under Attribution-ShareAlike license, unless stated otherwise. Cite this article:
Newport, Isle of Wight Facts for Kids. Kiddle Encyclopedia.