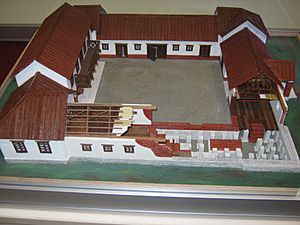 A model of a villa rustica

A Roman villa is a country house that was built and inhabited during the Roman Republic or the Roman Empire. In general the house has a courtyard, and all rooms are accessible from the coutrtyard. The entrance also leads into the courtyard. An example of such a villa, called villa rustica is shown in the picture. Villas were owned by rich people. Some of them even had mosaics, glass windows, central heating system (called hypocaust), and their own baths.

All content from Kiddle encyclopedia articles (including the article images and facts) can be freely used under Attribution-ShareAlike license, unless stated otherwise. Cite this article:
Roman villa Facts for Kids. Kiddle Encyclopedia.