Sandown is a seaside resort town and civil parish on the southeast coast of the Isle of Wight, England, which neighbours the town of Shanklin to the south, with the village of Lake in between the two settlements. Sandown Bay is the name of the bay off the English Channel which both towns share, and it is notable for its long stretch of easily accessible golden sandy beach. It is the site of the lost Sandown Castle. Whilst undergoing construction, this was attacked by a French force which had fought its way over Culver Down from Whitecliff Bay, resulting in the French being repulsed. It was built too far into the sea and constantly suffered erosion, until now reduced to a pile of rocks. Later forts in the town include the Diamond Fort (named after its plan), built inshore to replace the castle and which fought off a minor attack from privateers (probably French) in 1788, and the present "Granite Fort" at Yaverland, which is now the zoo. Together with Shanklin, Sandown forms a built up area of 21,374 inhabitants.

The sweeping esplanade from Devonia Steps to Yaverland and the bandstand was built during the First World War, for the first time stabilising the road to Bembridge. An extension to Brown's Golf Course (and former ice cream factory) was added in 1944 to disguise pumping apparatus for the Pipe Line Under the Ocean (PLUTO) pumping oil to the D-Day beaches, which still stands next to the large Art Deco Grand Hotel.

Sandown Bay is often used as a sheltered anchorage, especially for ships requiring salvage which are periodically towed into the bay (such as the Tarpenbeck) and the wreck of a salvage tug could be seen until recently at low tide under Culver Cliff (the Harry Sharman) which had been assisting the stricken tanker Pacific Glory in the 1970s.

Sandown is a typical Victorian seaside town, but is surrounded by a wealth of natural features. To the north is Culver Down, a chalk down accessible to the public, mostly owned and managed by the National Trust, and supports typical chalk downland wildlife, and many seabirds which nest on the adjoining cliffs. Nearby inland are Sandown Levels, one of the few freshwater wetlands on the Isle of Wight, where Alverstone Mead Local Nature Reserve is a very popular spot for birdwatching. Further inland the woodland of Borthwood provides delightful woodland walks, and bluebells aplenty in the spring.

The most significant wildlife designation in the area is the Special Area of Conservation which covers the marine sub-littoral zone, including the reefs and sea bed. At extreme low tide a petrified forest is partially revealed in the northern part of Sandown Bay, and fragments of petrified wood are regularly washed up on the beach. 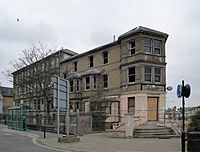 The Savoy Hotel, which is soon to be knocked down and mark a period of regeneration for the town.

Originally Sandown was of only military significance as its wide sandy beaches offers a landing place for invasion. One of the first non military buildings was "Villakin", a holiday home leased by the radical politician John Wilkes in the 18th century, which, along with the Royal Pavilion at Brighton began the fashion for seaside holidays. At first only available to the rich, the development of both railways and excursion steamers made such holidays more generally available. Sandown has been a seaside resort town since the Victorian age thanks to its sands and the sunny weather on the Isle of Wight compared to other parts of the United Kingdom. Its success, along with that of other neighbouring Isle of Wight resorts led to the building of a railway connecting Sandown with Ventnor at the south and Ryde on the north coast of the island. Sandown railway station is still on the one remaining operational railway on the island, which now goes from Ryde Pier Head to Shanklin.

Today Sandown esplanade boasts some fine Victorian and Edwardian hotels (many of which have been unsympathetically extended by breeze block annexes) which overlook the golden sands of the beach below. Sandown Pier hosts a large amusement centre with arcade games and children's play areas, typical of a seaside resort. The pier is also well used for sea fishing with designated areas especially for the angler. Further north, there is the Isle of Wight Zoo (also known as Sandown Zoo) which specialises in tigers. Other facilities include an 18-hole golf course, the Dinosaur Isle geological museum and Sandham Gardens, offering a skate park, children's play park, crazy golf, bowls and putting green. In recent years, the town has started to experience urban decay as many of the hotels began to close and be replaced with Care homes, driving away tourists. A grant given to Sandown and Ryde in 2015 has raised hopes of regeneration within the town. 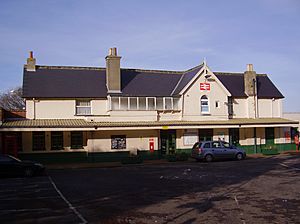 Previous Sandown Road Train that used to run round town.

As well as the Island Line Railway, Sandown is served by regular buses run by Southern Vectis on routes 2, 3 and 8. Destinations which can be directly reached include Bembridge, Newport, Ryde, Shanklin and Ventnor. Night buses are run on Fridays and Saturdays, along route 3. Local bus services previously run by Wightbus have now been re-absorbed by Southern Vectis.

Sandown is on the Isle of Wight Coastal Path, between Niton and Ryde.

Southern Vectis also used to run a road train during the holiday and tourist season. The Sandown road train closed in 2010.

Sandown is twinned (jumelée in French) with the town of Tonnay-Charente, in the western French département of Charente-Maritime. Its American twin town is St. Pete Beach, Florida.

All content from Kiddle encyclopedia articles (including the article images and facts) can be freely used under Attribution-ShareAlike license, unless stated otherwise. Cite this article:
Sandown Facts for Kids. Kiddle Encyclopedia.