Sandown Pier is a pleasure pier in Sandown, Isle of Wight, England. 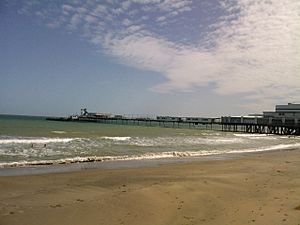 The pier as viewed from the beach

Plans for the pier were drawn up in the 1860s and bill passed in Parliament in 1864. However, construction did not start until 1876. The first section of the pier measured 360 feet (110 m) and it was opened on 29 May 1878 by Lady Oglander widow of Sir Henry Oglander, 7th Baronet.

Work to extend the pier to its full intended length were started in 1894. The new works were badly damaged in a storm on 12 January 1895.

The pier was taken over the Sandown Urban District Council in 1918.

In August 1989 a fire broke out in the amusement arcade and spread into the theatre causing damage estimated at £2,000,000. However, restoration was undertaken and the pier was reopened for the 1990 summer season.

The pier has a range of indoor amenities at the landward end, and an outdoor funfair and landing stage at the seaward end. There are cafes, a children's play area, an amusement arcade, bowling and an indoor crazy golf course.

All content from Kiddle encyclopedia articles (including the article images and facts) can be freely used under Attribution-ShareAlike license, unless stated otherwise. Cite this article:
Sandown Pier Facts for Kids. Kiddle Encyclopedia.