Sandown is a town in Rockingham County, New Hampshire, United States. The population was 5,986 at the 2010 census. 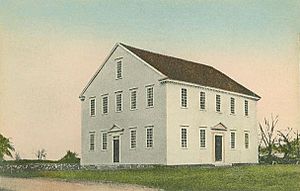 Once part of Kingston, Sandown was incorporated as a separate town in 1756 by Colonial Governor Benning Wentworth. It was named for picturesque Sandown on the Isle of Wight. The first minister of Sandown, the Reverend Josiah Cotton, built the Sandown Meeting House in 1774. It had an 11-foot-high (3.4 m) pulpit and marble columns supporting the gallery, and is still an excellent example of early New England church architecture.

According to the United States Census Bureau, the town has a total area of 14.4 square miles (37.3 km2), of which 13.9 sq mi (36.0 km2) is land and 0.5 sq mi (1.3 km2) is water, comprising 3.54% of the town. Sandown is primarily drained by the Exeter River; Phillips Pond, south of the center of town, drains north to the Exeter. Showell Pond, a smaller water body, drains northwest to Phillips Pond. Angle Pond, in the southeast corner of the town, and Cub Pond, along Sandown's eastern border, drain east towards the Powwow River. The highest point in Sandown is the summit of Hoyt Hill, at 505 feet (154 m) above sea level, near the town's southwest corner.

There were 1,694 households, out of which 48.7% had children under the age of 18 living with them, 71.0% were married couples living together, 6.8% had a female householder with no husband present, and 18.4% were non-families. 12.9% of all households were made up of individuals, and 3.1% had someone living alone who was 65 years of age or older. The average household size was 3.02 and the average family size was 3.32.

All content from Kiddle encyclopedia articles (including the article images and facts) can be freely used under Attribution-ShareAlike license, unless stated otherwise. Cite this article:
Sandown, New Hampshire Facts for Kids. Kiddle Encyclopedia.