Fremont is a town in Rockingham County, New Hampshire, United States. The population was 4,283 at the 2010 census. Fremont is crossed by the Rockingham Recreation Trail (a rail trail) and NH Route 107.

Settled in the 1720s, Fremont was originally part of Exeter. The area was once famous for its heavy growth of high-quality eastern white pine trees, reserved for use as masts of the Royal Navy. But residents began to use the wood for home construction. When in 1734 David Dunbar, surveyor-general, visited the Copyhold Mill to inspect fallen lumber, local citizens assembled, discharged firearms, and convinced Dunbar to leave. Returning with 10 men, Dunbar's group was attacked, and dispersed to a local tavern, by citizens disguised as Indians. This insurrection would be known as the Mast Tree Riot.

The town was granted in 1764 by Colonial Governor Benning Wentworth as Poplin. In 1853, Poplin petitioned the state legislature to change the name. In 1854, it became Fremont after General John C. Frémont, the first candidate of the Republican Party in the presidential election of 1856. Benton in Grafton County bears the name of Fremont's father-in-law, Senator Thomas Hart Benton.

Fremont is noted for an unspoiled meetinghouse, built in 1800, and today listed on the National Register of Historic Places. The town was once home to the largest brickyard in the state, producing 5 million bricks a year, and to the downtown Spaulding & Frost Cooperage, established in 1874, one of the oldest operating wooden barrel manufacturers in the country.

More recently, Fremont was home to the cult favorite, all-girl band The Shaggs.

According to the United States Census Bureau, the town has a total area of 17.4 square miles (45 km2), of which 17.2 sq mi (45 km2) is land and 0.2 sq mi (0.52 km2) is water, comprising 1.44% of the town. The highest point in Fremont is an unnamed summit, with an elevation of 322 feet (98 m) above sea level, near the town's western border. It is drained by the Exeter River. Fremont lies fully within the Piscataqua River (Coastal) watershed.

Fremont is bordered on the north by Epping, east by Brentwood, southeast by Kingston, south by Danville and Sandown, southwest by Chester and west by Raymond. 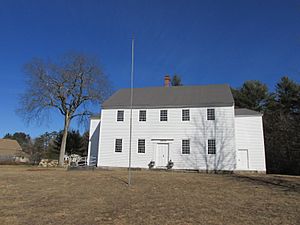 There were 1,165 households out of which 44.0% had children under the age of 18 living with them, 74.1% were married couples living together, 5.8% had a female householder with no husband present, and 15.6% were non-families. 10.4% of all households were made up of individuals and 3.5% had someone living alone who was 65 years of age or older. The average household size was 2.99 and the average family size was 3.20. 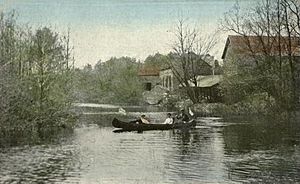 All content from Kiddle encyclopedia articles (including the article images and facts) can be freely used under Attribution-ShareAlike license, unless stated otherwise. Cite this article:
Fremont, New Hampshire Facts for Kids. Kiddle Encyclopedia.