Epping is a town in Rockingham County, New Hampshire, United States. The population was 6,411 at the 2010 census. Epping includes the area known as Camp Hedding.

The primary settlement in town, where 1,681 people resided at the 2010 census, is defined by the U.S. Census Bureau as the Epping census-designated place (CDP) and includes the densely populated portion of the town centered on New Hampshire Route 27 just west of New Hampshire Route 125. 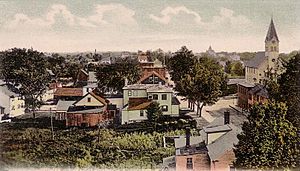 Following the American Revolution, many residents of the town moved to Monmouth, Maine, when General Henry Dearborn offered free land to his soldiers. Through the 1800s, farming was a principal occupation in Epping. The town also had substantial reserves of clay, long used by local residents to make bricks, and in 1840, the first commercial brickyard was established in Epping.

It was formerly said in jest: "Epping -- the center of the universe." Now, due to its strategic position at the crossroads of Route 101 and Route 125, the community is indeed becoming a retail center, as chain stores locate here. But because the traditional town center is clustered around Route 27, an older road connecting Exeter with Hooksett and Manchester, Epping's antique architectural charm has been spared from redevelopment.

Epping was once an important railroad crossroads for the Worcester, Nashua & Rochester Railroad and the Portsmouth & Concord Railroad, later both part of the Boston & Maine Railroad system. The north-south WN&R line through town was abandoned in 1932, with a short segment remaining in place south to Fremont to serve a brickyard there. This left the east-west Portsmouth Branch between Manchester and Portsmouth as the sole rail access to the outside world. Rail service on the Portsmouth Branch and the Fremont Branch ended in the early 1980s, the remaining track was abandoned by the Boston & Maine in 1982 and the rail was removed between 1983 and 1985. The railroad beds in town have been preserved as the Rockingham Recreational Trail. Abutments for the WN&R bridge over the Lamprey River can be seen along Route 125.

Epping is home to the Leddy Center, an antique playhouse where local performers present classics such as The Wizard of Oz and Anne of Green Gables. Musical lessons are also offered at this facility.

New England Dragway and Star Speedway are also located in Epping. New England Dragway puts on races and auto displays throughout the year, including the IHRA Amalie Oil North American Nationals and, since 2013, the NHRA New England Nationals. The dragway hosts a popular Halloween display during the second half of October.

An annual canoe race down the Lamprey River occurs on the last weekend in April, and the fire department arranges for Santa to drive through the town atop a fire engine during the winter.

Camp Hedding, the site of a United Methodist campground founded in 1862, is located in the eastern part of town. The ground now hosts an annual camp meeting for one week in August and an "olde time fair" on the first Saturday of August every year.

Epping has two annual parades, the memorial parade and the Christmas parade. The memorial parade usually includes youth sports teams, scouts, the combined middle and high school marching band, the fire department, police department, and veterans. The Christmas parade includes a few fire trucks and police cars that go around town with Santa and his elves throwing candy to kids who are outside.

According to the United States Census Bureau, the town has a total area of 26.2 square miles (68 km2), of which 26.0 square miles (67 km2) is land and 0.2 square miles (0.52 km2) is water, comprising 0.76% of the town. Epping is drained by the Lamprey and Piscassic rivers. The highest point in Epping is Kennard Hill at 472 feet (144 m) above sea level, located in the town's northwest corner. Epping lies fully within the Piscataqua River (Coastal) watershed.

There were 2,047 households out of which 35.8% had children under the age of 18 living with them, 59.7% were married couples living together, 8.5% have a woman whose husband does not live with her, and 28.0% were non-families. 21.1% of all households were made up of individuals and 7.1% had someone living alone who was 65 years of age or older. The average household size was 2.67 and the average family size was 3.12. 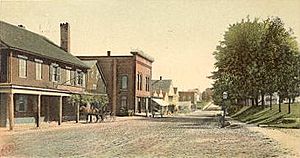 There were 703 households out of which 28.9% had children under the age of 18 living with them, 49.8% were married couples living together, 9.0% have a woman whose husband does not live with her, and 37.4% were non-families. 30.6% of all households were made up of individuals and 12.5% had someone living alone who was 65 years of age or older. The average household size was 2.37 and the average family size was 2.97.

All content from Kiddle encyclopedia articles (including the article images and facts) can be freely used under Attribution-ShareAlike license, unless stated otherwise. Cite this article:
Epping, New Hampshire Facts for Kids. Kiddle Encyclopedia.