Epping is a market town and civil parish in the Epping Forest district of the County of Essex, England. It is located 3 miles (5 km) northeast of Loughton, 5 miles (8 km) south of Harlow and 11 miles (18 km) northwest of Brentwood.

Although it is the terminus for London Underground's Central Line , the town retains some elements of rurality, being surrounded by Epping Forest and working farmland. Epping has many very old buildings, some of which are Grade I and II listed buildings. The town also retains its weekly market which is held every Monday and dates back to 1253. In 2001 the parish had a population of 11,047 although this has increased marginally since then to 11,461 at the 2011 Census

Epping has been twinned with the German town of Eppingen in north-west Baden-Württemberg since 1981. Although the once-famous Epping Butter, which was highly sought after in the 18th and 19th centuries, is no longer made, the well-known Epping sausages are still manufactured by Church's Butchers who have been trading on the same site since 1888.

"Epinga", a small community of a few scattered farms and a chapel on the edge of the forest, is mentioned in the Domesday Book of 1086. However, the settlement referred to is known today as Epping Upland. It is not known for certain when the present-day Epping was first settled. By the mid-12th century a settlement known as Epping Heath (later named Epping Street), had developed south of Epping Upland as a result of vigorous clearing of the forest for cultivation. In 1253 King Henry III conveyed the right to hold a weekly market in Epping Street which helped to establish the town as a centre of trade and has continued to the present day (the sale of cattle in the High Street continued until 1961).

The linear village of Epping Heath developed slowly into a small main-road town and by the early 19th century considerable development had taken place along what is now High Street and Hemnall Street. (Hemnall Street was until 1894 in the parish of Theydon Garnon, as was the railway station) Up to 25 stagecoaches and mailcoaches a day passed through the town from London en route to Norwich, Cambridge and Bury St. Edmunds. In the early 19th century, 26 coaching inns lined the High Street. A couple survive today as public houses, e.g. The George and Dragon and The Black Lion. The advent of the railways put an end to this traffic and the town declined, but it revived after the extension of a branch line from Loughton in 1865 and the coming of the motor car.

A number of listed buildings, most dating from the 18th century, line both sides of the High Street although many were substantially altered internally during the 19th century. Some of the oldest buildings in the town can be found at each end of the Conservation Area, e.g. Beulah Lodge in Lindsey Street (17th century), and the attractive group of 17th and early 18th century cottages numbered 98–110 (even) High Street.

The original parish church, first mentioned in 1177, was All Saints' in Epping Upland, the nave and chancel of which dates from the 13th Century. In 1833, the 14th-century chapel of St John the Baptist in the High Road was rebuilt in the Gothic Revival style. It became the parish church of Epping in 1888 and was again rebuilt. A large tower was added in 1909.

Epping, as it stands today, has grown as a favoured town of residence for those who work in London. Its market still brings shoppers in from surrounding villages and towns every Monday. Perhaps the most prominent building in Epping these days is the District Council's office with its clock tower, designed to bring balance to the High Street with the old Gothic Revival water tower at the southern end, built in 1872, and St John's Church tower in the centre. The centre of Epping on and around the High Street is a designated conservation area.

Epping's increasing popularity with young professionals and families, along with the Government's planning policies (as applied by the District Council) has led to the current situation: Epping is experiencing the biggest threat to its rural status yet and a number of sites (the largest being St. Margaret’s Hospital) are being proposed for redevelopment as new housing estates.

The various developments would see Epping’s housing stock rise by around 20% and has caused strong opposition from residents who wish to retain Epping’s rural ‘charm’, they state the town does not have the infrastructure to cope with a large influx of new residents and vehicles. Residents point to the regular traffic congestion, lack of parking spaces (and those taken up by commuters from all over who use the railhead), low water pressure and total lack of an NHS dentist as examples. This opinion has been echoed by Epping Town Council, who have stated that Epping will not be able to cope with any new housing estates for at least 10 years.

There has been a new raft of eateries entering the town in recent months and the quality of those places has, and will continue to bring visitors to the town.

Epping lies 19 miles (30.6 km) northeast of the centre of London towards the northern end of Epping Forest on a ridge of land between the River Roding and River Lea valleys. Epping is north of the small village of Theydon Bois.

Most of the population live in the built up area centred on and around the High Street (B1393) and Station Road. About a thousand people live in the village of Coopersale which, while physically separated from Epping by forest land, is still part of the civil parish. A few dozen households make up the hamlets of Coopersale Street and Fiddlers Hamlet. Much of the eastern part of the present parish was until 1895 in the parish of Theydon Garnon.

The Town lies north-east of junction 26 (Waltham Abbey, Loughton A121) of the M25 motorway and south-west of junction 7 (Harlow) of the M11 motorway. 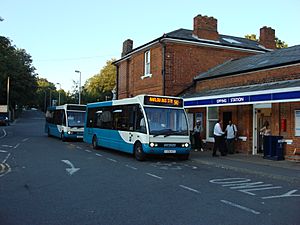 Epping is served by a number of bus routes, serving many surrounding towns and villages including; Thornwood Common, Harlow, Abridge, Waltham Abbey, Ongar and Brentwood. The bus services are either commercial services, or operated under contract to Essex County Council.

Epping is served by Transport for London rail services, and is the eastern terminus of the Central line of the London Underground. The Central line now terminates at Epping. However until 30 September 1994, it used to serve stations at North Weald, Blake Hall (until 1981) and Ongar where services terminated. The station has a car park with 508 spaces (the second largest car park on the London Underground network), a toilet, a ticket machine, a pay phone as well as seats for sitting outside of the station to wait for buses.

Main Line train services are available from a number of neighbouring towns, with the closest stations to Epping being Roydon, Harlow and Waltham Cross. These are served by the West Anglia Main Line and are operated by Abellio Greater Anglia.

All content from Kiddle encyclopedia articles (including the article images and facts) can be freely used under Attribution-ShareAlike license, unless stated otherwise. Cite this article:
Epping, Essex Facts for Kids. Kiddle Encyclopedia.