The Epping Ongar Railway is a preserved railway. It runs along the last section of the old Great Eastern Railway and London Underground Central line branch line. The line runs between Epping and Ongar. There is also an intermediate stop at North Weald. The line was reopened in late 2004 after 10 years of being closed. It runs a Sunday and Bank Holiday service using a Class 117 diesel multiple unit. The service runs between Ongar and Coopersale. The service is provided by volunteers who take care for the line as well as run the trains. The land and infrastructure are owned by Epping Ongar Railway Ltd. 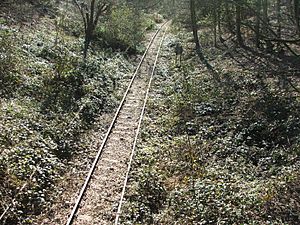 The Epping to Ongar branch, which travelled though the Essex countryside, was one of the London Underground's more rural routes.

The branch line to Ongar was built in 1865 by the Eastern Counties/Great Eastern Railway. The eastern section of the line, between Epping and Ongar, was single track. There was one passing loop at North Weald station. Around 14 trains went as far as Ongar station each day. The rest finished at Epping or Loughton.

The trains continued to finish at Epping or Loughton until 1949. At this time the London Passenger Transport Board's New Works project extended the Central line to Epping using electric trains. The Central Line would take over the railway from British Rail. As part of this change, the Epping-Ongar branch line had its through trains to London removed. Instead, a shuttle service between Epping (to connect with trains to London) and Ongar was used. At one stage, it was possible to see the unusual sight of steam trains and London Underground electric multiple units side-by-side at Epping. The steam shuttle was hired by the London Transport Executive from British Rail. This was because it was felt that the cost of electrifying the line to Ongar could not be justified because of the low passenger numbers on this part of the branch.

In the 1950s, there were attempts to improve the service on the branch line. Over time, permission was given to electrify the line in 1957. However, because the electrification did not cost much, the branch was only able to have special two- or three-car trains running on it. This was because the power supply was not strong enough to support trains that had more cars. Another problem was that the stations on the line had short platforms. This would mean that the normal 8-car trains would not be able to stop at them. Because of this, the Epping-Ongar branch line was normally operated separately from the rest of the Central Line. However, for two days each year, trains did run through from London. These trains would terminate at North Weald for the airshow on the Saturday and Sunday of its opening. The normal Epping-Ongar service would get around this extra service by passing the train on the other line at North Weald station whilst it headed towards Epping. The train from London was run as an extra train on the normal Central Line timetable. However, this extra train was only four carriages long instead of the normal eight.

During the late 1960s it became clear that the number of people using the line had not become as high as people thought that it would. Not a lot of new development was allowed because the land was now Green Belt land. The number of people using the line peaked in 1971, and it was still only 650 people every day. This meant that the line did not make very much money. London Underground tried to close the whole line in 1980, but they were not able to. Instead, fewer trains were run on the line and they also closed Blake Hall tube station on Sundays.

Blake Hall was permanently closed in 1981. Before the station closed it only had six passengers a day. The station building still survives as a private residence. However, the platform was removed, but recently (2015) partially reinstated to a very high standard.

North Weald station's platform one was closed in 1976. The passing loop and westbound tracks were lifted in 1978. Until this time, access to the two platforms was controlled from the original Eastern Counties Railway signal box. This signal box is still on the southbound platform. North Weald was the last section of the London Underground network to be signalled using semaphore signals.

The line was making a loss of seven pounds for each passenger journey. It was also in need of some expensive maintenance work. On 30 September 1994, the line was closed to the public, with one months notice. From this time on, the Central Line terminated at Epping station. When the line closed it was carrying just 80 passengers a day. Local lore said that the line was being kept open in case the Cabinet needed to be evacuated to the nuclear bunker at Kelvedon Hatch.

Cravens Heritage Trains have preserved a three-car unit of 1960 stock. This was the train that ran the final London Underground service on the line.

The line reopened on Sunday 10 October 2004. It is being run by the Epping Ongar Railway Volunteer Society. An hourly service between Ongar and North Weald was operated. Shortly after opening the line was extended to Coopersale. However, it is currently not possible to get off the train there.

At the end of 2007, the railway was sold to a new private owner. This was because planning permission for the Ongar residential development had been given. The new owner wants to bring steam locomotives back to the line.

In early 2008, the line was closed to passenger trains. This was to allow the railway to be able to have major engineering works. The work will mean that steam locomotives will be able to run on the line again. To make this happen run-round loops and signalling, amongst other things, must be built.

Passenger services on the heritage line were operated throughout 2006 and 2007 by a Class 117 diesel multiple unit. This unit is currently being restored along with a class 205 DEMU. Class 37029 is in operation along with 03170. There are a selection of British rail Mk1 and Mk2 coaches on the line. The line also has some small diesel shunters; a Drewry shunter (works number 2566, current number D1995), named "Heather" by the railway, and two Ruston 88 shunters (RH 512572 is in service, RH 398616 is being used for spares and as a static display). The line employs a Harsco tug unit ("Badger") for engineering work. The EOR's fleet also includes a small works trolley, a Shark brake van, a Dogfish ballast hopper, and a box van for permanent way duties.

All content from Kiddle encyclopedia articles (including the article images and facts) can be freely used under Attribution-ShareAlike license, unless stated otherwise. Cite this article:
Epping Ongar Railway Facts for Kids. Kiddle Encyclopedia.