Ruston & Hornsby, later known as Ruston, was an industrial equipment manufacturer in Lincoln, England, the company's history going back to 1840. The company is best known as a manufacturer of narrow and standard gauge diesel locomotives and also of steam shovels. Other products included cars, steam locomotives and a range of internal combustion engines, and later gas turbines. The company is now part of the Siemens group of Germany. 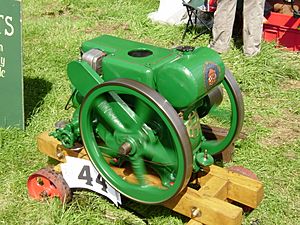 The original company was Proctor and Burton established in 1840, operating as millwrights and engineers. They became Ruston, Proctor and Company in 1857 when Joseph Ruston joined them, acquiring limited liability status in 1899. From 1866 they built a number of four and six-coupled tank locomotives, one of which was sent to the Paris Exhibition in 1867. In 1868 they built five 0-6-0 tank engines for the Great Eastern Railway to the design of Samuel W. Johnson. Three of these were converted to crane tanks, two of which lasted until 1952, aged eighty-four. Among the company's output were sixteen for Argentina and some for T. A. Walker, the contractor building the Manchester Ship Canal.

During the First World War, Ruston assisted in the war effort, producing some of the very first tanks and a number of aircraft, notably the Sopwith Camel. 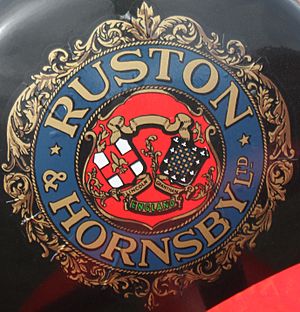 Ruston & Hornsby badge, displaying the arms of Lincoln and Grantham 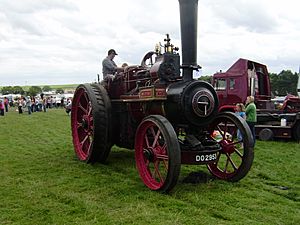 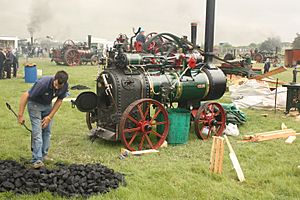 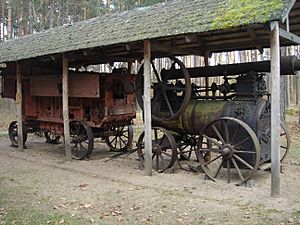 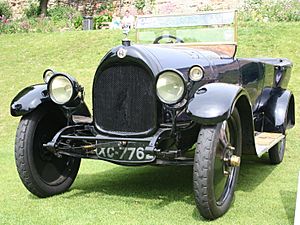 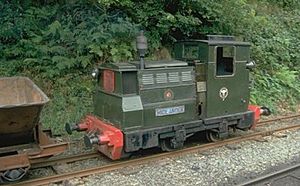 On 11 September 1918, the company amalgamated with Richard Hornsby & Sons of Grantham to become Ruston and Hornsby Ltd (R&H). Hornsby was the world leader in heavy oil engines, having been building them since 1891, a full eight years before Rudolph Diesel's engine was produced commercially.

Ruston built oil and diesel engines in sizes from a few HP up to large industrial engines. Several R&H engines are on display at the Anson Engine Museum at Poynton nr Manchester. Also at Internal Fire - Museum of Power, Tanygroes near Cardigan. The company also diversified into the manufacture of petrol engines, again from around 1.5 hp upwards, some of these designs were later manufactured under licence by The Wolseley Sheep Shearing Machine Company.

The firm were builders of steam engines and portable steam engines for many years, mainly for the agricultural market however they also created steam rollers which where used for making roads and owned by contractors and councils.

In World War 1, the company made around 2750 aeroplanes and 3000 aero engines. The 1000th Sopwith Camel (B7380), built at the plant in 1917, was named the Wings of Horus. The company built around 1,600 Sopwith Camels, 250 Sopwith 1½ Strutters, and 200 Royal Aircraft Factory B.E.2s. The company, as Ruston & Proctor, was the largest British builder of aero-engines in the War, and built the largest bomb of the war. One of the directors, Frederick Howard Livens, had a son who was an army officer on the front line. Captain William Howard Livens was sent to Lincoln, where he developed the Livens Projector and the Livens Large Gallery Flame Projector.

In 1919, Colonel J.S. Ruston was inspired to create a garden suburb in Lincoln – the Swanpool Garden Suburb. His vision was to provide affordable houses for his workers, with easy access to healthy outdoor recreation, such as a pleasure ground, cricket ground and swimming baths. Ruston purchased 25 acres of the Boultham Hall estate and established the Swanpool Co-operative Society. Architects Hennell and James of London created the designs for the houses, which were built between April 1919 and September 1920. The vision for the new suburb included a technical institute, church and schools. After running into financial difficulties the development was sold in 1925 to Swanpool Garden Suburb Ltd, a private company, but only 113 of the planned 2–3000 houses had been constructed and no more were built.

After World War I the company attempted to diversify and one outcome was the Ruston-Hornsby car. Two versions were made, a 15.9 hp with a Dorman 2614 cc engine and a larger 20 hp model with 3308 cc engine of their own manufacture. The cars were, however, very heavy, being built on a 9-inch chassis, and extremely expensive – the cheapest was around £440 and the most expensive nearly £1000, and within a few years other makers were selling similar vehicles that weighed only 3/4 ton and cost around £120–200 – and never reached the hoped-for production volumes. About 1500 were made between 1919 and 1924, two of which are still retained by Siemens on the Lincoln site. One is fully restored in running/driving condition, while the second example is still awaiting attention.

The R-H car was developed by the chief engineer, Edward Boughton, who joined the company in 1916 after helping to develop the tank. Later he would start the Automotive Products Group (APG) in Leamington Spa in 1920 which made Borg & Beck clutches, Lockheed hydraulic brakes, and Purolator fuel filters.

In September 1944, when the German Wehrmacht OB West headquarters at Saint-Germain-en-Laye (near Paris) were captured, previously commanded by Field Marshal Günther von Kluge (from 2 July 1944), they were found to be powered by Ruston diesel engines.

It built the first prototype of the Valiant tank in 1944. The Grantham site built the Matilda II tank.

Ruston & Hornsby was a major producer of small and medium diesel engines for land and marine applications. The company began to build diesel locomotives in 1931 (and continued up until 1967). It was a pioneer and major developer in the industrial application of small (up to 10,000 kW) heavy duty gas turbines from the 1950s onwards. In the 1960s it was Europe's leading supplier of land-based gas turbines. It introduced Dry Low Emission (DLE) combustion technology in the mid-1990s becoming market leaders.

The initiation of the production and design of gas turbines was largely due to Bob Feilden CBE (1917–2004) who joined the company in 1946. Gas turbines were first produced in 1952.

The Beevor Foundry on Beevor Street was opened in 1950 by General Sir William Joseph Slim (later Field Marshal William Slim, 1st Viscount Slim), and claimed to be the biggest foundry in Europe.

In the 1950s, it was producing one turbine a fortnight. The company sold its 1000th gas turbine in July 1977. It won the MacRobert Award in December 1983 for the Tornado gas turbine. The company's Cambridge-educated Egyptian chairman, Dr Waheeb Rizk OBE, was concurrently President of the IMechE from 1984-5 and also President of the International Council on Combustion Engines from 1973-77. He was Managing Director from 1971–83 and developed the W layout for gas turbine power stations that were used as emergency generating stations for the National Grid, also known as peaking power plants. These had to be developed due to prolonged electricity blackouts in south-east England in 1961 caused by cascading failure. It built the first gas turbine to burn North Sea gas, for the Eastern Gas Board in Watford. In 1981 it won an order to power the Urengoy–Pomary–Uzhgorod pipeline (Trans-Siberian Pipeline).

Research work was done in conjunction with the University of Sussex and with Cranfield University in the 1980s, where extensive development was undertaken of the combustion chamber and of the gallery to the turbine.

Industrial Gas Turbines of note manufactured at the Lincoln plant:

Until the late 1960s, it produced Thermax boilers. The boiler business was sold for £1.75m to Cochrane & Co of Annan, Dumfries and Galloway in October 1968, who were bought by John Thompson of Wolverhampton four months later. They were bought by Clarke Chapman in 1970.

In 1957, it was the first company to fit a main Royal Navy ship (HMS Cumberland) with a (experimental) gas turbine.

In 1959, it opened a new type of power plant using waste sewage gas that powered eight turbines at Britain's biggest sewage works at the Northern Outfall Sewer at Beckton in east London. This was an 18,000 horsepower combined heat and power plant.

The company pioneered combined heat and power schemes. The company began this technology in Cortemaggiore, Emilia-Romagna in 1956 at the Agip (Azienda Generale Italiana Petroli) oil refinery. By the late 1960s, Ruston & Hornsby CHP units were installed in Australia, Germany, the USA, South America, and the Middle East.

In the 1970s, these CHP schemes were not as well developed as today because electricity companies were not interested in developing a market that would provide direct competition to themselves. CHP schemes were then known as total energy schemes, which comprised exhaust heat recovery. The company won the Queen's Award for Enterprise: International Trade (Export) in 1977, 1978 and 1982.

The large Singer factory in Clydebank, which employed 11,000 people, was notably powered by Rustons turbines. The King Faisal Specialist Hospital was installed with a CHP unit in 1975. Whitehall in London is heated and has its electricity from a CHP unit built in the late 1990s.

In 1940 R&H bought a controlling interest in the well-known Paxman diesel engine company of Colchester in Essex. In the later stages of the war, Paxman built 4,000 diesel engines that powered all the British-built tank landing craft (LCT) on D-Day. They supplied diesel engines for British locomotive in the 1960s. From 1954-64 the company's Managing Director was Geoffrey Bone who had been part of the Power Jets team, and whose father Victor Bone was Managing Director of R&H from 1944 until his death. It was due to Geoffrey Bone that Bob Feilden was recruited for R&H who subsequently formed the gas turbine manufacturing operations.

In 1934 the company had formed Aveling-Barford from two companies Aveling and Porter of Kent and Barford & Perkins of Peterborough, using a former site of R&H.

The company closed its Grantham diesel-engine factory in 1963.

The company itself was only taken over once, in November 1966, by English Electric who paid £25m. Robert Inskip, 2nd Viscount Caldecote became Chairman of the company. In the R-H Group was also Bergius, Kelvin of Glasgow (now called Kelvin Diesels); Davey, Paxman & Co of Colchester (now owned by MAN SE); and Alfred Wiseman & Co Ltd (known as Alfred Wiseman Gears) in Grantham.

Up to that point, the company had been listed on the Stock Exchange. This formed Britain's second largest diesel engine group, second to Hawker-Lister. From that moment on it was a subsidiary of a larger company. It became known as the Ruston Turbine Division of English Electric Diesels.

Following the acquisition by English Electric the production of large Ruston engines was moved to the English Electric Vulcan factory in Newton-le-Willows. The production of the smaller engine range was moved to Stafford where it became a part of the Dorman Diesel range. Turbine technology was concentrated in Lincoln with Napier turbochargers moving from Liverpool to Lincoln in 1967. In 1969 the Lincoln site became Ruston Gas Turbines. The name was then changed to European Gas Turbines in 1989 following the merger of GEC and Alcatel Alsthom. Later this business was sold to Siemens. The gas turbine business is still located in the old Ruston factory in the centre of Lincoln. 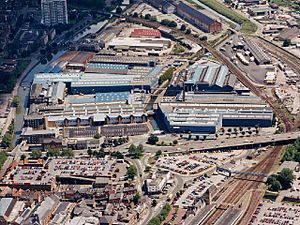 Pelham Works, Lincoln next to the A15

The company progressively became part of the General Electric Company of UK ('GEC', not to be confused with the US firm General Electric - GE) in 1968, because GEC bought English Electric. By the end of 1969 the Lincoln subsidiary company was known as Ruston Gas Turbines.

The Ruston Paxman diesels division became known as Ruston Diesels, and moved the former English Electric diesel works. The former Power Jets plant at Whetstone became a research plant for the gas turbine division of GEC. GEC then merged its heavy engineering division with Alsthom of France, becoming part of GEC-Alsthom in 1989, which changed its name to Alstom in 1998, when the Lincoln subsidiary was known as EGT. Alsthom had been more commonly known as Société Alstom in the 1970s.

Latterly, Alstom sold its gas turbine division (in Lincoln and Franche-Comté) to Siemens (of Germany) in 2003 when Alstom faced financial ruin. The site of the former headquarters at Thorngate House, on the opposite side of the A15, is now residential flats.

Rustons – in its various incarnations – was always an engine producer rather than a machine producer, and it could be considered that they simply produced machines in order to sell engines. 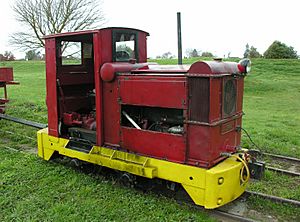 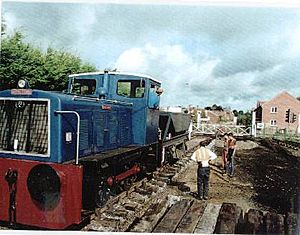 "County School" a standard gauge locomotive, on the Mid-Norfolk Railway 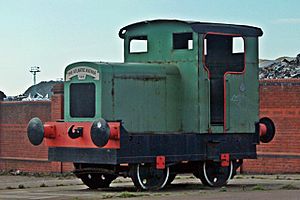 Heritage railways with Ruston locomotives include :

All content from Kiddle encyclopedia articles (including the article images and facts) can be freely used under Attribution-ShareAlike license, unless stated otherwise. Cite this article:
Ruston (engine builder) Facts for Kids. Kiddle Encyclopedia.