The Midland Railway – Butterley is a heritage railway at Butterley, near Ripley in Derbyshire.

The railway is also home to the 2 ft (610 mm) narrow gauge Golden Valley Light Railway, which opened in 1991 and partially lies on the trackbed of a former plateway built by the Butterley Company in 1813 to connect its iron works facilities in Butterley and nearby Codnor Park.

Stations of the MR (Butterley) 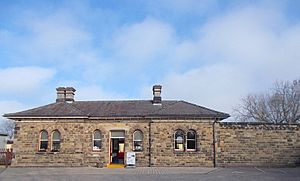 The railway is licensed to host weddings and parties.

In September 1999 the Kosovo Train for Life was loaded at Butterley station, before travelling via Kensington Olympia railway station and the Channel Tunnel, to Kosovo in conjunction with the Kosovo Force peace-keeping efforts.

The steam engines of the Midland Railway Trust that run passenger services are mostly ex-LMS and BR locomotives of similar designs. Rarer industrial and mainline classes (one from as early as 1866), are stored in the Swanwick museum site.

Stopped for repairs or maintenance

Extra Note: A pair of 21 in (533 mm) gauge steam-outlined replicas of the PRCLT's Pacifics and a carriage were given to the Trust as a gift and two roads in the West Shed and about 50 metres of track have since been laid for them.

In addition to the standard gauge stock on the Midland Railway, The Golden Valley Light Railway, a separate organisation altogether, owns a collection of locomotives, ex colliery manriders, Ashover coach No.4 and ex industrial wagons, many of which are being restored to work on the line.

These coaches are only in use on vintage days.

As with most railways, BR Mk1s are the staple passenger stock of the MRB

While some other railways have an active rake of LMS coaches, most of Butterley's collection is still unrestored.

As with most other railways, Butterley owns several unique carriages, which are only used on very special occasions, e.g. tributes to fellow servicemen. 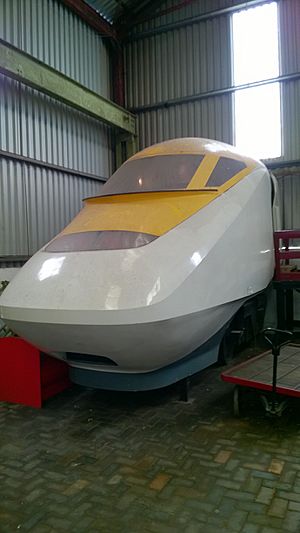 Mock up of the Class 93 locomotive, located in the Matthew Kirtley Museum at Swanwick 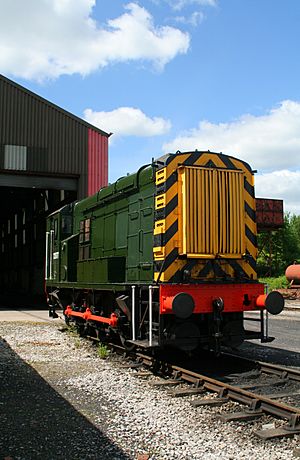 The main museum site is at Swanwick Junction, with many attractions and groups based there. There are other attractions at Butterley.

All content from Kiddle encyclopedia articles (including the article images and facts) can be freely used under Attribution-ShareAlike license, unless stated otherwise. Cite this article:
Midland Railway – Butterley Facts for Kids. Kiddle Encyclopedia.