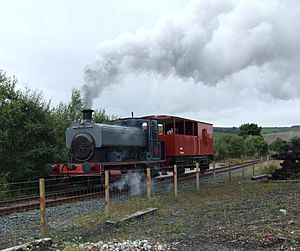 An Andrew Barclay saddle tank, normally resident at the Caledonian Railway (Brechin), operating on the centre's running line in 2005 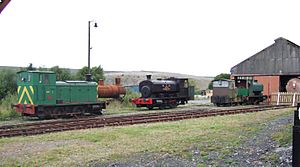 The Scottish Industrial Railway Centre is an industrial heritage museum operated by the Ayrshire Railway Preservation Group. The centre owns a number of standard gauge steam locomotives and diesel locomotives as well as some narrow gauge items and an extensive collection of photographs.

The centre was based at the former Minnivey Colliery , Dalmellington, East Ayrshire, Scotland, from 1980; but, following problems with the lease, the Group decided in 2002 to move the centre to the nearby Dunaskin Heritage Centre .

During 2005 council funding was withdrawn from the Heritage Centre causing it to close, but the railway was still able to start running steam-hauled rides at the Dunaskin site, using a borrowed locomotive.

A lack of locomotive availability curtailed operations during 2006 and 2007 but, following the completion of the boiler swap and overhaul of Andrew Barclay 0-4-0ST N.C.B. No. 10, a series of successful steam days have been held since 2008.

The museum has a collection of Andrew Barclay Sons & Co. steam locomotives.

The centre is home to a wide variety of goods wagons including British Railways 16 ton mineral wagons and pallet vans, the latter having been formerly owned and operated by Scotch Whisky manufacturer Johnnie Walker. The centre has recently purchased a London, Midland and Scottish Railway Inspection Saloon which is currently being repaired and it is hoped that it will be able to provide rides for the public in the near future.

All content from Kiddle encyclopedia articles (including the article images and facts) can be freely used under Attribution-ShareAlike license, unless stated otherwise. Cite this article:
Scottish Industrial Railway Centre Facts for Kids. Kiddle Encyclopedia.