Kids Encyclopedia Facts
This page is about the council area. For the hospital, see East Ayrshire Community Hospital.

Kilmarnock is the largest town, followed by Cumnock; other small main towns are New Cumnock and Stewarton. The area was formed in 1996, from the former Kilmarnock and Loudoun and Cumnock and Doon Valley districts. Kilmarnock is the county's capital and also largest town. The former Kilmarnock and Loudoun District Council was also twinned with Sukhum, Abkhazia. Following a review of links this link is now considered as a friendship link.

Kilmarnock and Loudoun (Cill Mhearnaig agus Lughdan in Scottish Gaelic) was one of nineteen local government districts in the Strathclyde region of Scotland from 1975 to 1996. The district was formed by the Local Government (Scotland) Act 1973 from part of the county of Ayrshire, namely:

Apart from the former burghs the district included the towns of Hurlford and Kilmaurs.

The district was abolished in 1996 by the Local Government etc. (Scotland) Act 1994, which replaced the regions and districts with unitary council areas. The district's area was combined with that of Cumnock and Doon Valley to form the East Ayrshire council area. The name Kilmarnock and Loudoun continues to be used for a constituency of the House of Commons and, covering a similar area, a Kilmarnock and Loudoun constituency of the Scottish Parliament.

Kilmarnock is the largest settlement in East Ayrshire with a population of over 46,000 and is home to the HQ for East Ayrshire Council 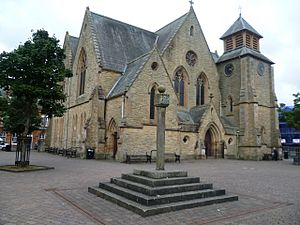 Historically, like many parts of Scotland, the economy of East Ayrshire was largely dependent on industries such as coal mining, textiles and general manufacturing which largely fell into decline in Scotland during the 1970s and 1980s. Certain parts of East Ayrshire, particularly in the south of the region, such as Auchinleck, Bellsbank and Dalmellington have failed to recover from the economic hardship caused by the decline and gradual closure of traditional industries that provided employments within these areas. East Ayrshire Council has pledged £200 million in economic recovery funds to support communities and employment opportunities, however, some communities continue to struggle with developing their local economies.

Whilst in towns such as Kilmarnock, the administrative centre for East Ayrshire Council has encouraged new businesses and industry, Kilmarnock has saw a gradual decline in manufacturing performance in recent years. In 2009, Diageo, owner of Kilmarnock founded brand Johnnie Walker announced the proposed closure of the bottling plant facility in Hill Street, and in 2012, Diageo closed the facility with the loss of 700 jobs.

Food and drink as well as local tourism provides a large sum to the economy of East Ayrshire, with visitor attractions such as Dean Castle, Palace Theatre and Dumfries House generating large means of income for the area. In rural communities of the authority, agriculture continues to be the leading sources of employment and economic productivity, particularly in the southern communities of the area. The public sector is the largest employer within the area, with areas of the council such as Education, Social Services and NHS Ayrshire and Arran being responsible for a large number of employees delivering various areas of council operation and services. In 2012, 279 new companies were created within East Ayrshire and are supported by the Ayrshire Chamber of Commerce. There was a drop in the number of new business developments being created the following year in 2013. Kilmarnock is home to the Halo Urban Generation (Kilmarnock) Ltd. company which was founded by Marie Macklin CBE, with a focus on providing opportunities for new businesses within the area, and with an estimated Gross Domestic Product (GDP) revenue of £205 million to the Scottish economy, it also supports 1,500 jobs within the area.

All content from Kiddle encyclopedia articles (including the article images and facts) can be freely used under Attribution-ShareAlike license, unless stated otherwise. Cite this article:
East Ayrshire Facts for Kids. Kiddle Encyclopedia.