Ayrshire (Scottish Gaelic: Siorrachd Inbhir Àir) is a historic county in south-west Scotland, located on the shores of the Firth of Clyde. It is also, under the name the County of Ayr, a registration county. Its principal towns include Ayr, Kilmarnock and Irvine. Like the other counties of Scotland, it currently has no administrative function, instead being sub-divided into the council areas of North Ayrshire, South Ayrshire and East Ayrshire. It has a population of approximately 366,800.

The electoral and valuation area named Ayrshire covers the three council areas of South Ayrshire, East Ayrshire and North Ayrshire, therefore including the Isle of Arran, Great Cumbrae and Little Cumbrae. The three islands were part of the County of Bute until 1975 and are not always included when the term Ayrshire is applied to the region. The same area is known as Ayrshire and Arran in other contexts.

Ayrshire is one of the most agriculturally fertile regions of Scotland. Potatoes are grown in fields near the coast, using seaweed-based fertiliser, and in addition the region produces pork products, other root vegetables, and cattle (see below); and summer berries such as strawberries are grown abundantly.

Ayrshire shares with Dumfries and Galloway some rugged hills country known as the Galloway Hills. These hill lie to the west of the A713 (Ayr to Castle Douglas road) and they run south from the Loch Doon area almost to the Solway Firth. To the east of this route through the hills lie the Carsphairn and Scaur Hills which lie to the south east of Dalmellington and south of New Cumnock. Glen Afton runs deep into these hills.

Glasgow Prestwick International Airport, serving Glasgow and the West of Scotland more generally, is located more than 30 miles away from Glasgow in Ayrshire. The name Glasgow was added on in front of Prestwick as per American military airport naming conventions, as the airport was in the past oft-used as a stopover by US military personnel on their way to and from military bases in Germany. Moreover it has a niche in rock history as the only place in Britain visited by Elvis Presley, on his way home from Army service in Germany in 1960.

The area that today forms Ayrshire was part of the area south of the Antonine Wall which was briefly occupied by the Romans during the reign of Emperor Antoninus Pius (see: Roman Britain#Occupation and retreat from southern Scotland). It was inhabited by the Damnonii, who are presumed to have been Britons. Later, it formed part of the British Kingdom of Strathclyde, which was incorporated into the Kingdom of Scotland during the 11th century. In 1263, the Scots successfully drove off of the Norwegian leidang-army in a skirmish known as the Battle of Largs.

A notable historic building in Ayrshire is Turnberry Castle, which dates from the 13th century or earlier, and which may have been the birthplace of Robert the Bruce.

The area used to be heavily industrialised, with steel making, coal mining and in Kilmarnock numerous examples of production-line manufacturing, most famously Johnnie Walker whisky. In more recent history, Digital Equipment had a large manufacturing plant near Ayr from about 1976 until the company was taken over by Compaq in 1998. Some supplier companies grew up to service this site and the more distant IBM plant at Greenock in Renfrewshire. Scotland's aviation industry has long been based in and around Prestwick and its international airport, and although aircraft manufacture ceased at the former British Aerospace plant in 1998, a significant number of aviation companies are still based on the Prestwick site. However, unemployment in the region (excluding the more rural South Ayrshire) is above the national average.

During the early 17th century, many people from Ayrshire moved to Ireland as a part of the Ulster plantation with surnames such as Burns, Hamilton, Morrow, Stewart and Kennedy. 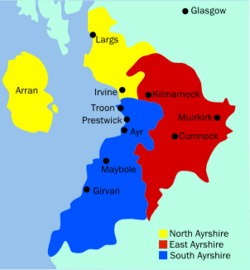 The Local Government (Scotland) Act 1889 established a uniform system of county councils in Scotland and realigned the boundaries of many of Scotland's counties. Subsequently, Ayr county council was created in 1890. In 1930 the Local Government (Scotland) Act 1929 was implemented. This re-designated the Burghs into large burghs and small burghs. This new categorisation influenced the level of autonomy that the Burghs enjoyed from the county council. The act also abolished the parish as a unit of local government in Scotland. In Ayrshire in excess of 30 parishes were consolidated into ten district councils. The District Councils were Ayr, Cumnock, Dalmellington, Girvan, Irvine, Kilbirnie, Kilmarnock, Maybole, Newmilns and Saltcoats.

In May 1975 the county council was abolished and its functions were transferred to Strathclyde Regional Council. The county area was divided between four new districts within the two-tier Strathclyde region: Cumnock and Doon Valley, Cunninghame, Kilmarnock and Loudoun and Kyle and Carrick. The Cunninghame district included the Isle of Arran, Great Cumbrae and Little Cumbrae, which had until then been administered as part of the County of Bute.

Towns and villages in Ayrshire 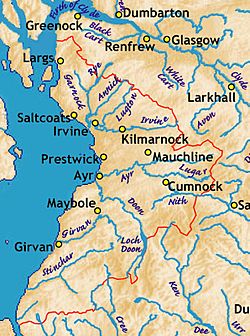 Ayrshire, with rivers and several towns.

The main rivers flowing to the Clyde coast are, from north to south, the following:

All content from Kiddle encyclopedia articles (including the article images and facts) can be freely used under Attribution-ShareAlike license, unless stated otherwise. Cite this article:
Ayrshire Facts for Kids. Kiddle Encyclopedia.