Kilwinning ( Scots: Kilwinnin; Scottish Gaelic: Cill D’Fhinnein) is a town in North Ayrshire, Scotland. It is on the River Garnock, north of Irvine, about 21 miles (34 km) south of Glasgow. It is known as "The Crossroads of Ayrshire". Kilwinning was also a Civil Parish. The 2001 Census recorded the town as having a population of 15,908. The estimated population in 2016 was 16,460.

According to John Hay, once the headmaster of the parish school in Kilwinning, "North Ayrshire has a history of religion stretching back to the very beginning of missionary enterprise in Scotland. The Celtic Christians or Culdees of the period of St Columba and St Mungo found here, in this part of Scotland, a fertile field for the propagation of the faith. Kilmarnock, Kilbride, Kilbirnie, are all, like Kilwinning, verbal evidence of the existence of 'Cillean' or cells of the Culdee or Celtic Church." 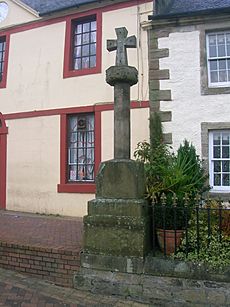 In the distant past, the town was called Sagtoun, or Saint’s Town, after St. Winning, the founder of an early seventh century church on this site. However, the actual identity of St. Winning is unclear. Some scholars have associated him with the Irish saint known as St Finnian of Moville, who died in the late sixth century. Others believe he was a Welshman by the name of Vynnyn, and the Aberdeen Breviary of 1507 asserts that he was from Scotland. The work of Professor Owen Clancy of the University of Glasgow in 2001 makes another identification possible. Clancy argued that, in fact, Saint Ninian and Saint Finnian were the same person, the difference being attributed to an error on the part of a medieval scribe. If that is so, then Ninian, who was a missionary to the Picts in Scotland, and Winning, who was deemed a Scotsman in the Aberdeen Breviary, could theoretically be one and the same as the Irishman named Finnian. 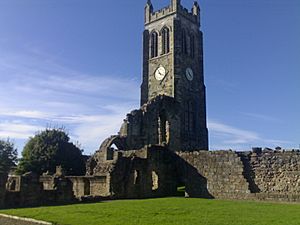 Kilwinning Abbey as it stands today

The original town was situated at the Bridgend and Corsehill while the other bank of the river was the site of the abbey, its outbuildings, orchards, doocot, etc. 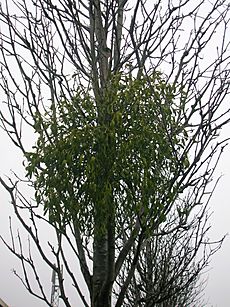 Mistletoe growing on a Rowan tree in Kilwinning town centre. A rare plant in Scotland.

The Kilwinning Community Archaeology Project carried out a dig in Kilwinning Abbey in 2010, which revealed much about the life of the people in the area during the medieval period. 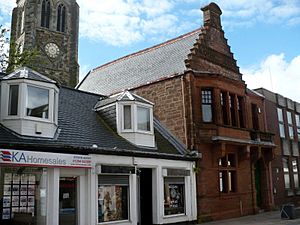 Kilwinning is notable for housing the original Lodge of Freemasonry in Scotland. When the Lodges were renumbered, Kilwinning was kept as Lodge Number '0', the Mother Lodge of Scotland.

The origin of the Lodge is unclear with the first documentary evidence being a mention in The Schaw Statutes of 1598 and 1599, which identify it in its first paragraph as the "heid and secund ludge of Scotland".

The lodge's own legend attributes the formation to the building of the Abbey at Kilwinning in the 12th Century. There existed in this period corporations or fraternities of masons, endowed with certain privileges and immunities, capable of erecting religious structures in the Gothic style. A party of these foreign masons is supposed to have come from Italy, or Cologne, for the purpose of building the Abbey at Kilwinning and to have founded there the first regularly constituted Operative Lodge in Scotland. The Lodge is reputed to have been held in the Chapter House on the Eastern side of the cloisters. On the broken walls and moldering arches of the Abbey numerous and varied Masons' marks may be seen, some very beautiful in design.

Kilwinning is located on the banks of the River Garnock in Ayrshire, west/central Scotland. Kilwinning's neighbours are the coastal towns of Stevenston to the west, and Irvine to the south.

In 1966, Kilwinning fell within the area designated Irvine New Town. Kilwinning rapidly expanded with new estates built on surrounding farm land to meet the planned increase in population. Many of the town's new inhabitants were a direct result of Glasgow Overflow relocation.

Today Kilwinning consists of the pedestrianised historic town centre, Bridgend (which originally was a separate village), both now surrounded by the newer estates of Corsehill, The Blacklands, Woodwynd, Pennyburn, Whitehirst Park, and Woodside. A popular local nickname for Kilwinning is Kilwinkie.

The Main Street of Kilwinning has recently been refurbished as part of the regeneration of the Irvine Bay area by Irvine Bay Regeneration Company. 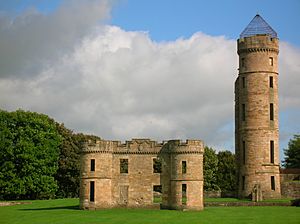 The ruins of Eglinton Castle

The ancient seat of the Earls of Eglinton, it is located just south of Kilwinning. Built between 1797 and 1802 in Gothic castellated style dominated by a central 100-foot (30 m) large round keep and four 70-foot (21 m) outer towers, it was second only to Culzean Castle in appearance and grandeur. The foundation stone of the new Eglinton Castle in Kilwinning was laid in 1797, the 12th Earl of Eglinton, was proud to have the ceremony performed by Alexander Hamilton of Grange, grandfather of the American Hero Alexander Hamilton. 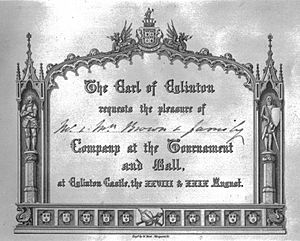 An official invitation to the 1839 Tournament

The Castle is chiefly remembered, in modern times, as the scene of the Eglinton Tournament in 1839, which was a magnificent display. Funded and organized by Archibald Montgomerie, 13th Earl of Eglinton, the revival-medieval tournament, attracted thousands of visitors to see the combatants and the ladies in their finery. Among the guests was the future Emperor of the French—Napoleon III. The tournament was an ironic contrast between the old and the new! Excursion trains, among the first ever, were run from Ayr (pre-dating the formal opening of the line in 1840).

Today the castle is a ruin. The Tournament perhaps marked a turning point, being a severe drain on the Eglinton family fortune, which coincided with bottomless expenditure on the Ardrossan harbour and the Glasgow, Paisley and Ardrossan Canal. The castle fell into disrepair after being unroofed in 1925 and was used for Commando demolition practice during World War II, the remains were demolished to the level they are today in 1973. Eglinton Country Park is now a tourist attraction. 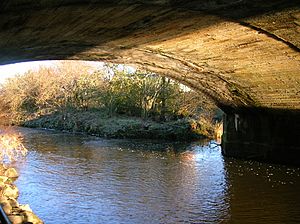 Kilwinning has many buildings and sites of Architectural significance.

Among them is Abbot Adam's Bridge, which is notable as it was constructed in mediaeval times with much of the original structure standing today. The bridge was widened 1859. 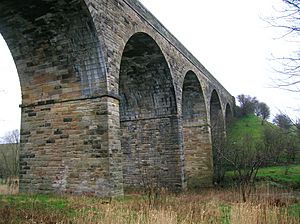 The services stopping at Kilwinning:

Kilwinning has road links with the rest of Ayrshire. The town is bypassed by the A78 dual carriageway, which provides connections to the A71 and A77 dual carriageways and the Glasgow bound M77 motorway.

Kilwinning is served by Stagecoach West Scotland and Shuttle Buses.

Kilwinning is well served by Glasgow Prestwick Airport, which is only 12.9 miles (20.8 km) south on the A78 dual carriageway (around 21 min), or three stops on the train (around 14 min). Airline operators within the Airport maintain routes to many UK, European and North American destinations.

The Ancient Society of Kilwinning Archers is believed to date back to 1483 and while records are only available from 1688, there is a reference in the early minutes, which would appear to confirm this assumption.

The sport still continues in Kilwinning to this very day. The annual papingo shoot is held in the grounds of the old Abbey on the first Saturday in June, when the wooden bird is mounted on a pole and suspended from the clock tower to allow the archers to attempt to dislodge the wings and then the bird itself. In 2014, Michael Portillo visited the Ancient Society of Kilwinning Archers during a visit to Kilwinning on his Great British Railway Journeys TV series for the BBC.

Kilwinning Community Football Academy or Kilwinning FA are a large community football setup within the town offering footballing activity for children as young as one years old all the way up to their senior ladies team.

Kilwinning Rangers F.C., or The Buffs as they are more affectionately known, play their home games at Buffs Park and compete in the Western Region Premiership . They play in blue and white hoops.

The team was formed in 1899 as a Juvenile football club, originally playing at Blacklands Park, which they shared with the then senior side of Eglinton Seniors. They officially became a Junior football club on 26 July 1902.

The name Buffs was first recorded on 21 September 1900 when the local paper, the Irvine Herald, recorded that the so-called Buffs had had an emphatic victory over Kilmarnock Belgrove. Kilwinning Rangers have had periods of success throughout their history, and proudly boast that they were the first, and last Ayrshire Club to win the Scottish Junior Cup in the twentieth century!

Kilwinning Sports Club, or KSC as it is known locally, was launched in July 2002 in the Pennyburn area of Kilwinning.

There is one secondary school in the town, Kilwinning Academy, although until recently the town was also served by St Michael's Academy.

A large campus of Ayrshire College (formerly James Watt College) was built in Kilwinning and was completed in the summer of 2000 ready for the first intake of students in August that year. Its arrival has brought some benefits to the town with increased revenue from the students supporting local businesses. Since 2013 the campus has been part of Ayrshire College.

It is notable that 37% of Kilwinning residents aged 16–74 have no formal qualifications; the national average is 33%.

Notable residents, past and present

All content from Kiddle encyclopedia articles (including the article images and facts) can be freely used under Attribution-ShareAlike license, unless stated otherwise. Cite this article:
Kilwinning Facts for Kids. Kiddle Encyclopedia.