Ardrossan (Gaelic: Àird Rosain, "headland of the deer/oxen") is a town on the North Ayrshire coast in south-western Scotland. Although there are high levels of deprivation around the town centre of Ardrossan, the town is gentrifying but with some suburban developments around the outskirts of the town. The town has a population of roughly 11,000 and forms part of a conurbation with Saltcoats and Stevenston. Ardrossan is located on the east shore of the Firth of Clyde.

Ardrossan's roots can be traced to the construction of its castle 'Cannon Hill', thought to be in around 1140, by Simon de Morville. The castle and estate passed to the Barclay family (also known as Craig) and through successive heirs until the 14th century when it passed to the Eglinton family on the death of Godfrey Barclay de Ardrossan, who died without an heir. Sir Fergus Barclay, Baron of Ardrossan was said to be in league with the Devil and in one of his dealings, set the task for the Devil to make ropes from sand; on failing to do so, the Devil kicked the castle with his hoof in frustration and left a petrosomatoglyph hoofprint. 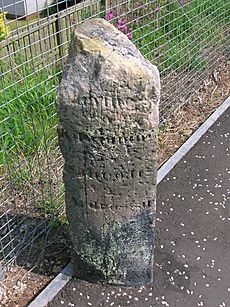 The castle stood until 1648, when Oliver Cromwell's troops had it destroyed, taking much of the stonework to Ayr to build the citadel at Montgomerieston. The ruins of Cromwell's Fort still stand, but are overgrown and in a dangerous condition.

In 1759 the Earl of Eglinton formed a herd of the ancient breed of White or Chillingham cattle at Ardrossan, probably using stock from the Cadzow herd. The numbers dropped and in 1820 the remaining animals were dispersed. All the animals in the herd were hornless.

Ardrossan developed during the 18th and 19th centuries thanks to its position on the coast. Exports of coal and pig iron to Europe and North America were the main trade from the town's port, which became a centre for shipbuilding. Fishing vessels and small cargo boats were the mainstay of the shipyard until the 1950s, when the yard ceased to exist as a result of foreign competition. A smaller yard, McCrindle's, operated until the 1980s before it ceased trading.

Passenger services from Ardrossan harbour to Brodick on the Isle of Arran started in 1834, and services to Belfast in Ireland (later Northern Ireland) and the Isle of Man followed in 1884 and 1892 respectively. Clyde sailings were operated initially by the Glasgow and South Western Railway Company from Winton Pier and the Caledonian Railway from Montgomerie Pier. The Earl of Eglinton's ambitious plan for a canal link to Glasgow was never realised.

Between 1841 and 1848 Ardrossan was a part of the "West Coast Main Line" equivalent of its time. The fastest route from London to Glasgow was by train to Fleetwood, and then by packet boat to Ardrossan. After 1848 the entire journey could be made by rail, avoiding Ardrossan. The link to the Isle of Man no longer operates, having first been moved to Stranraer until all Scottish services terminated. Shell-Mex operated an [oil refinery] on behalf of the Air Ministry, from a World War II aviation-fuel canning factory, and the harbour was expanded for the company's tanker ships to berth. Residents blocked plans for further expansion of the refinery, limiting the operations that could be carried out there in the 1960s. Operations at Shell-Mex ceased in 1986. 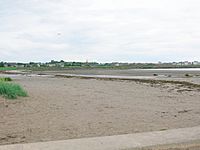 Ardrossan North Bay - site of the murder of the 10th Earl of Eglinton in 1769.

The harbour has been redeveloped as a marina, and the passenger and vehicle ferry to Brodick is operated by Caledonian MacBrayne.

Ardrossan became a burgh, in 1846, with a provost, magistrates and commissioners. Its burgh status was lost in 1974 on the formation of Strathclyde Regional Council, when it came under Cunninghame District. It is now part of North Ayrshire, created as a unitary authority in 1996.

In 1921 Ardossan was the European site for the first successful reception of radio signals from North America. Using a frequency near 1.3 Megahertz an amateur radio group in Connecticut sent Morse code signals to a station set up in a tent.

Since 2006 Ardrossan has been part of a regeneration area, overseen by the Irvine Bay Regeneration Company. Its vision for Ardrossan is as a gateway to Arran and good place to live and relax next to the sea in a regenerated town centre serving the existing and incoming community. It has started to be achieved through renewal of the town centre, which includes a derelict office in Princes Street which has been turned into two modern shops. The former Jack Miller's Hotel building at 78 Princes Street an(ex Posthouse for changing horses in the 1800s), was refurbished in autumn 2010 and has been home to several businesses and including an art gallery and artists studio space called Phoenix, and a graphic design studio. The old pumphouse has been transformed into an Italian restaurant. In 2014 work started on new office accommodation beside the marina, with works due to be completed in summer 2015. The North Shore project includes the redevelopment of the oil refinery site and the extension of the marina. 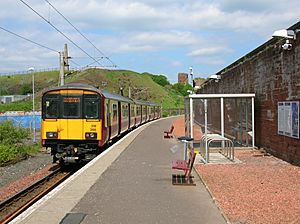 There are two closed railway stations: Ardrossan North was adjacent to Montgomerie Street, and the platform remains can still be seen, although the redevelopment of the former Shell Bitumen Plant site edges closer to the remains. Ardrossan Montgomerie Pier was further down the line from Ardrossan North, but the building of the harbourside apartments removed the last remains of the platforms and no evidence remains that a railway station once stood there. The last train ran through these stations around 1968, although by that time they served summer boat train services only, after regular passenger traffic ceased in 1932.

Ardrossan is linked to Glasgow via the A737 road and to Ayr via the A78 road. The A78 Three Towns Bypass opened in December 2004 and has provided an improvement to local transport links, reducing local travelling times. The bypass has diverted heavier traffic from the Three Towns. Bus services to the town are operated primarily by Stagecoach West Scotland. 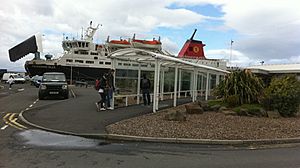 A regular ferry service from Ardrossan to Brodick on the Isle of Arran has run since 1834. The ferry departs every two hours and 45 minutes Monday–Saturday and takes 55 minutes. A ferry service to Campbeltown started on 23 May 2013.

In the past Ardrossan had ferry services to Belfast, and, in summer, to the Isle of Man. The Belfast run was operated by the Burns and Laird Line and its last scheduled service was in 1976. The last ship to sail the route was the MV Lion, which was the largest car ferry to operate from Ardrossan. The Isle of Man run was operated by the Isle of Man Steam Packet Company during the summer season, and its last service was in 1985, although Caledonian MacBrayne experimented with a smaller vessel for a couple of seasons, which ran one return service per week. 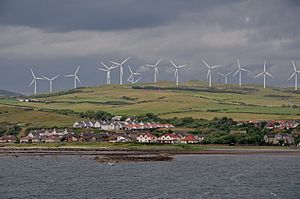 In Ardrossan, there are five churches. St.Peter-in-chains is a Roman Catholic church. Park Church is Church of Scotland. There is also the EU Congregational Church and the Church of the Nazarene. Barony St John's also used to be Church of Scotland but the congregation moved out of the building in 2011 with safety concerns and eventually united with Saltcoats: New Trinity church in November 2013 to form what is now called Ardrossan & Saltcoats Kirkgate Parish Church, with the Chapelwell Street premises in Saltcoats being retained for worship. The Barony St John's premises were sold in December 2014 to a charity proposing to run personal safety classes. 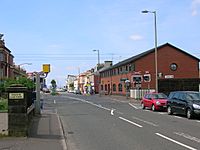 Ardrossan has some notable buildings, for example Barony St John's Church and St Peter-in-Chains Roman Catholic Church]. St Peter's is of modern construction in an all-brick, Swedish style. Its architects were Gillespie, Kidd & Coia. Barony St John's dates from the mid-19th century. Both buildings are on the South Crescent, overlooking South Beach and Irvine Bay. The crescent is lined by large villas dating from the 19th century, many of which have been converted into multiple residences.

Also known as 'Cannon Hill' by locals, it is a great place to visit, including a swing park. An historic ancient burial place on Castle Hill was vandalized in the 1950s. One tomb was taken to the Barony Church on South Crescent for safekeeping.

A prehistoric shell-mound, measuring 102 ft by 16 ft, on the side of Cannon Hill, close to Ardrossan Town railway station, was excavated by the Ayrshire historian John Smith in the 1890s. Its length was mostly overhung by a few feet, by the rock face, which had formed a rock-shelter, which the excavation showed had been occupied at intervals over a considerable period. The railway workings had cut a longitudinal section in the mound, which overlay a 1 ft layer of raised beach sand.

The mound was composed of seashells, mainly periwinkle and limpet, and animal bones. Relics found included a stone 'anchor' with a groove cut round it for a rope, a possible stone sinker, fragments of very coarse, hammer stone, hand-made pottery, also pieces of wheel-turned, glazed pottery, a bone chisel, two bone needles, etc. No sign of the mound is visible today.

Arguably the town's most notable son was physicist John Kerr. He discovered the quadratic electro-optic effect, a change in the refractive index of a material in response to an electric field, now known as the Kerr effect.

Former pupil of Ardrossan Academy David T. Denver is Professor of Politics and International Relations at the University of Lancaster. Denver is a frequent media commentator on Scottish political issues and voting patterns and has published several books in the field of statistical analyses of voting patterns.

Roy Aitken, who was born and raised in the town, went on to become one of the great captains of Celtic Football Club in the 1980s, and also captained the Scotland national team. Aitken also played for Newcastle United, Aberdeen and St Mirren, and managed Aberdeen to a trophy success when they won the Scottish League Cup in 1996. Aitken was given his Celtic first team debut at the age of 16 while he was still attending St Andrews Academy in neighbouring Saltcoats. His manager at the time was Jock Stein.

Bobby Ferguson, who was born and raised in the town, won seven Scotland caps while goalkeeper for Kilmarnock in the 1960s. Ferguson was transferred to east London club West Ham United for a fee of £65,000 in 1967, which at the time was a world record fee for a goalkeeper. He made his West Ham debut against Sheffield Wednesday on 19 August 1967, the first game of the 1967–68 season.

W.B. Young who holds one of the records for longest Scottish rugby career was also from Ardrossan.

Craig Reid footballer for Motherwell is from the town.

From the core of its now-gone industrial workers, Ardrossan has produced a number of people of individual note. Ardrossan Academy has produced several former pupils that hold US and international patents for their scientific work.

The town also featured on Series 1, Episode 3 of hit BBC comedy Gary: Tank Commander, during which "The General" wanted to trace the footsteps of his ancestors, the MacBadgers, who had originally hailed from the town.

Dugald Drummond, born in Ardrossan in 1840, was C.M.E. with the Caledonian Railway, among others, and was buried at Brookwood Cemetery, in Woking. There is a street named after him in Portsmouth. His brother, Peter Drummond, was C.M.E. for the Glasgow and South Western Railway. They were brought up in Montgomerie Street.

Other places with the same name

The name Ardrossan has also been given to places elsewhere in the world:

All content from Kiddle encyclopedia articles (including the article images and facts) can be freely used under Attribution-ShareAlike license, unless stated otherwise. Cite this article:
Ardrossan Facts for Kids. Kiddle Encyclopedia.