Ayr (/ɛər/; Scottish Gaelic: Inbhir Àir, "Mouth of the River Ayr") is a large town and former Royal Burgh situated on the west coast of Ayrshire in Scotland, United Kingdom. It is the administrative centre of the South Ayrshire Council area and historic county town of Ayrshire. Ayr is currently the most populated settlement in Ayrshire and is the 12th most populous settlement in Scotland. The town adjoins the smaller town of Prestwick to the north, forming a single continuous urban area with the town.

Ayr was established as a Royal Burgh in 1205, serving as Ayrshire's central marketplace and harbour throughout the Medieval Period and remaining a well-renowned port across the Early Modern Period. On the southern bank of the River Ayr sits the ramparts of a Citadel constructed by Oliver Cromwell during the mid-17th Century. Towards the south of the town is the birthplace of Scottish poet Robert Burns in the suburb of Alloway. With the expansion of the railway during the 19th Century Ayr soon developed into a seaside resort. This remains the case today with tourism occupying a significant sect of the local economy in Ayr through the opening of a Butlin's holiday park on the southern headlands of the town and through the continued presence of the Gaiety Theatre, which ran various shows across the late 20th century attracting performers from across the United Kingdom.

Ayr is one of the largest retail centres along the south of Scotland and was recognised as the second healthiest town centre in the United Kingdom by the Royal Society for Public Health in 2014. Ayr has hosted the Scottish Grand National horse-racing steeplechase annually since 1965. The town also accommodates the headquarters of the Ayr Advertiser and Ayrshire Post newspapers and the West FM radio station. 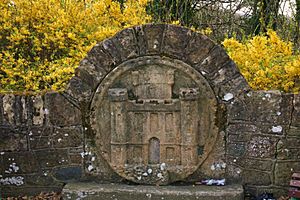 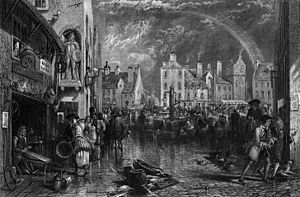 The name Ayr can be traced back to a pre-Celtic word meaning "watercourse". The name was used before the establishment of the Julian calendar as a name for the River Ayr. Ayr was founded as a market burgh town in 1205 by King William the Lion. It was formerly named 'Inverair' or 'Inverayr', meaning "mouth of the river Ayr", yet this was later abbreviated to 'Ayr'. Elements of the former name remain present within the Scottish Gaelic name for Ayr – Inbhir Air.

Since 1261 annual fairs were held in the town. At this time the town had a recorded population of 1,500 and served as a major port on the west coast. The town was occupied by England from 1301 until 1312 as part of the Scottish Wars of Independence.

On 26 April 1315, a Parliament of Scotland was held in Ayr by Robert The Bruce at St. John's Tower by the sea. Later, in 1652, the town was used as a base and fortress for some of Oliver Cromwell's men. Cromwell established a large fortress along the mouth of the River Ayr and erected walls around the area just south of the River's mouth - most of these walls remain present to this day. St John's Tower, which sat around the centre of the fortress, was originally part of a large church yet this was knocked down during the construction of the fort with the tower being used for military practice; it is now protected by "Friends Of Saint Johns Tower" (FROST) residents in the "Ayr Fort Area" which sits atop the former site of the citadel. A permanent military presence was established in the town with the completion of Ayr Barracks (later known as Churchill Barracks) on the citadel site in 1795.

Ayr is a coastal town which lies on the mouth of the River Ayr. The river then flows out into the larger Firth of Clyde estuary. From the coast the Isle of Arran can be seen, and on a very clear day, the northern tip of Northern Ireland. It is within the region of Strathclyde. Much of the land in and around this area is very flat and low lying, used for rearing dairy cattle. Towards the south of Ayr however the land is higher than most areas in the county of Ayrshire, an example of this being the Brown Carrick Hill which is situated due south of Doonfoot. Ayr lies approximately 35 miles (55 km) southwest of Glasgow.

The urban area which encompasses Ayr is defined by the General Register Office for Scotland as the adjoining localities of Ayr and Prestwick − this is the 12th largest urban area in Scotland. 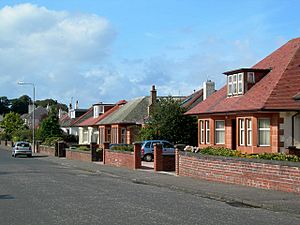 The nearest official Met Office weather station to Ayr is Auchincruive, about 3 miles (5 km) to the north-east of Ayr town centre.

The area experiences very cool summers and somewhat mild winters. The air is cooler during the summer due to its proximity to the sea as water has a major cooling effect on summer temperatures. During the winter months the reverse happens and the sea air has a major warming effect on the climate. The area rarely ever sees extremes due to the effects of sea air. Rainfall is generally plentiful throughout the year due to Atlantic weather systems sweeping in from the west. Compared with the rest of Scotland, the area rarely sees much mist and fog. This is because the land is relatively flat and low lying and with the wind blowing across the flatter land, this generally hinders fog from developing widely. This has made Glasgow Prestwick International Airport particularly well known as one of the less fog-prone airports in Scotland. Snowfall is rare in this part of Scotland because of the mild sea air. 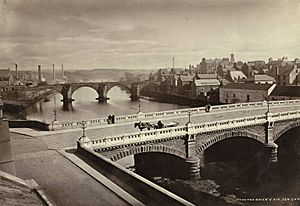 The Ayr railway station has services to Glasgow Central station with a half-hourly service except on Sundays. There are regular services to Edinburgh Waverley, Stranraer, Girvan, Kilmarnock, Dumfries, Carlisle and Newcastle. These services are operated by SPT/Abellio ScotRail.

The railway station provides rail and sea connections via Stranraer for the connecting bus to Cairnryan for either the Stena Line ferry service to the Port of Belfast or the P&O Ferries service to Larne Harbour connecting with Northern Ireland Railways via Carrickfergus and Jordanstown to Belfast Central and Belfast Great Victoria Street. There is also the connection via Troon on P&O Ferries on a seasonal basis to Larne Harbour.

The town is served by the Glasgow Prestwick International Airport just 2 miles (3 km) north from Ayr, which offers regional and domestic air services across Europe and the British Isles. Further destinations are available from Glasgow Airport, which is accessible by train to Paisley Gilmour Street for the connecting bus to the airport. In relation to Ayr, Glasgow Airport is 35 miles (56 km) away.

Although the town does not have any ferry services from its harbour, it is in close proximity to ferry services to Northern Ireland. Troon, 5 miles (8 km) north of Ayr, has a seasonal service to Larne onboard P&O. Regular rail services to Troon and Barassie operate every 30 minutes from Ayr railway station. Cairnryan, 60 miles (100 km) south of Ayr, has up to eight daily departures to Belfast. 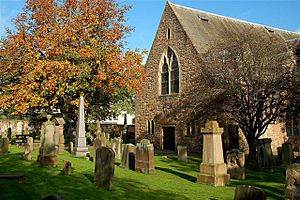 The Auld Kirk Of St John The Baptist

The Church of Scotland is the main denomination in Ayr with nine churches spread throughout the town. The Roman Catholic Church has two churches and a Cathedral - previously located at the Good Shepherd Cathedral which has been demolished.

There is also a Baptist Church and Evangelical church in John Street, a Latter-Day Saints Church at Orchard Avenue and the Southside Christian Fellowship in Ayr Town Hall. Ayr is also home to two Orange Lodges.

At the United Kingdom Census 2001, Ayr had a population of 46,431, a fall of -3.2% on 1991. Mid-2008 population estimates placed the total resident population at 46,070 making Ayr the 12th largest urban area in Scotland. The 2011 census has shown that Ayr’s population has grown by around 0.9% since the 2001 census - this surpassed the population growth of Ayr and Prestwick which only grew by 0.63% which fell short of the national population growth of Scotland of 4.61%. 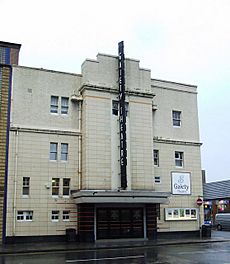 Ayr is home to The Gaiety Theatre. Built in 1902, reconstructed after a fire in 1904, its façade remodeled in 1935, and further reinstated after a fire in 1955. In 1995, an annex was constructed, including a new café, box office, dressing rooms and studio space. After a faltering start, which saw several years as a cinema after WWI, the theatre was bought by Ben Popplewell, from Bradford who already had a track record of success running the Pavilion theatre on Ayr seafront. For fifty years the Popplewell family ran the theatre – latterly as part of the Glasgow Pavilion business. During this time the Gaiety developed a reputation as a variety theatre with a 'summer' variety show – the Gaiety Whirl – which ran for 26 weeks at its height. Many Scottish and UK stars appeared regularly on its stage, and several started their careers there. The programme offered more than a summer show however, with several weeks of Shakespeare and regular transfers from Glasgow Citizens theatre, being part of a varied offer.

After seventy years in private ownership the local council acquired the Gaiety theatre freehold in 1974. It then operated as a municipal theatre under direct local authority management. After many years of successful operation the theatre began to lose audiences and the council felt the revenue subsidy it provided and the requirement for capital investment required a new approach. In January 2009 the theatre closed, leaving Ayr without a theatre. The closure was met with considerable opposition and dismay among many Ayr residents, particularly since it appeared that the required capital and revenue investment to reopen the theatre would not be available. A public meeting attracted over 400 attendees, the future of the theatre was a key issue in the local press, many Scottish performers expressed their dismay and there was extensive discussion on social media. In early 2009 South Ayrshire Council invited tenders to take on the theatre management. The Ayr Gaiety Partnership (AGP), a charity formed for the purpose in Summer 2009, secured preferred bidder status. Just over three years later, having secured financial backing from the council and Scottish Government, as well as from local fundraising, AGP took on a 99-year lease of the theatre. 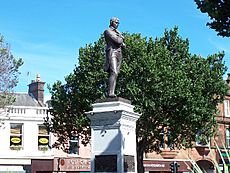 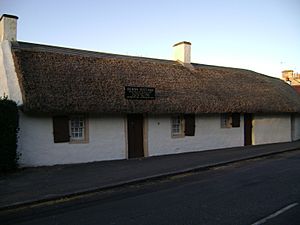 To the north of Ayr is the adjoining town of Prestwick, which is famous for its golf and aviation industries, thanks to the presence of Glasgow Prestwick International Airport. Only 5 miles (8 km) north of Ayr is Troon, a golf and seaside resort which has hosted British Open Championship. Ayr has three golf courses in Bellisle, Seafield and Dalmilling, as well as a private course called St Cuthberts. The area is synonymous as a seaside resort, with the south of the town housing the Craig Tara and Haven (formerly Butlins) holiday parks. The suburban village of Alloway to the south of the town is also well established for its associations with the poet Robert Burns. Further south, the fishing village of Dunure takes in a ruined castle which was formerly owned by the Kennedy family.

Ayr is served by three libraries plus a mobile library. These are:

Ayr is twinned with:

All content from Kiddle encyclopedia articles (including the article images and facts) can be freely used under Attribution-ShareAlike license, unless stated otherwise. Cite this article:
Ayr Facts for Kids. Kiddle Encyclopedia.