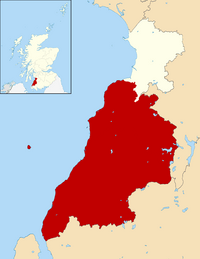 A map of the area recognised as Carrick today within South Ayrshire. 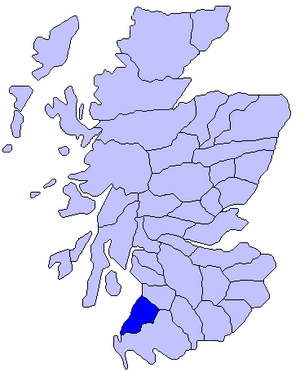 Map of Scotland showing the district of Carrick

Carrick (Scottish Gaelic: A' Charraig) is a former comital district of Scotland which today forms part of South Ayrshire.

The district of Carrick was originally part of the Kingdom of Galloway and was ruled over by its lords until 1186, when it was granted to Duncan, son of Gilbert of Galloway. He became the first to hold the Earldom of Carrick. His son Neil became the second Earl but he had no male heir so his daughter, Margaret (a.k.a. Marjorie of Carrick) inherited and became Countess of Carrick. The Earldom passed to her son Robert de Bruce, later to become King Robert I of Scotland, upon her death in 1292.

Carrick saw some involvement in the Scottish wars of independence under Robert Bruce which culminated in his victory over the English at Bannockburn and was the scene of much inter-family feuding during the sixteenth and seventeenth centuries with various branches of the powerful Kennedys contending for land and honour.

The title Earl of Carrick is now one of the lesser Scottish titles of the heir apparent to the throne, currently Prince Charles, the Prince of Wales, whose principal Scottish title is Duke of Rothesay.

The word Carrick comes from the Gaelic word Carraig, meaning rock or rocky place. Maybole was the historic capital of Carrick. The county was eventually combined into Ayrshire which was divided naturally by its rivers into the three districts of Cunninghame in the north along the River Irvine, in the centre by the River Ayr and Kyle in the south along the River Doon by the District of Carrick. These three districts formed Ayrshire, one of the counties of Scotland. The main reorganisation took place during the Local Government (Scotland) Act 1889, this Act established a uniform system of county councils and town councils in Scotland and restructured many of Scotland’s counties. (See: History of local government in the United Kingdom)

Kyle and Carrick was the former name (1975–1996) of a local government district in the Strathclyde region of Scotland. In 1996 it was re-constituted as a Unitary Authority, but renamed South Ayrshire.

All content from Kiddle encyclopedia articles (including the article images and facts) can be freely used under Attribution-ShareAlike license, unless stated otherwise. Cite this article:
Carrick, Scotland Facts for Kids. Kiddle Encyclopedia.