Robert Burns (25 January 1759 – 1796) was a famous poet born in Alloway, Ayrshire, Scotland. His poem (and song) Auld Lang Syne is often sung at Hogmanay (the last day of the year), and Scots Wha Hae served for a long time as an unofficial national anthem of the country. Other poems and songs of Burns that remain well-known across the world today, include A Red, Red Rose, A Man's A Man for A' That, To a Louse, To a Mouse, The Battle of Sherramuir, Tam o' Shanter and Ae Fond Kiss.

Burns is seen as the national poet of Scotland. Much of his work is written in broad Scots, a version of English.

His poem and song A Man's A Man For A' That was sung at the opening of the Scottish Parliament in 1999.

Burns died at 37, and is buried in the graveyard of St Michael's Church, Dumfries, Scotland. 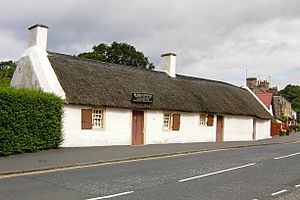 He was born in a house built by his father (now the Burns Cottage Museum), where he lived until Easter 1766, when he was seven years old. Here Burns grew up in poverty and hardship, and the severe manual labour of the farm left him weakened.

He had little regular schooling and got much of his education from his father, who taught his children reading, writing, arithmetic, geography, and history and also wrote for them A Manual Of Christian Belief. He was also taught by John Murdoch (1747-1824), who opened an 'adventure school' in Alloway in 1763 and taught Latin, French, and mathematics to both Robert and his brother Gilbert (1760-1827) from 1765 to 1768 until Murdoch left the parish.

After a few years of home education, Burns was sent to Dalrymple Parish School during the summer of 1772 before returning at harvest time to full-time farm labouring until 1773, when he was sent to lodge with Murdoch for three weeks to study grammar, French, and Latin.

By the age of 15, Burns was the principal labourer at Mount Oliphant. During the harvest of 1774, he was assisted by Nelly Kilpatrick (1759-1820), who inspired his first attempt at poetry, O, Once I Lov'd A Bonnie Lass. In the summer of 1775, he was sent to finish his education with a tutor at Kirkoswald, where he met Peggy Thomson (b.1762), to whom he wrote two songs, Now Westlin' Winds and I Dream'd I Lay.

At Whitsun, 1777, William Burness removed his large family from the unfavourable conditions of Mount Oliphant to the 130-acre (0.53 km2) farm at Lochlea, near Tarbolton, where they stayed until William Burness's death in 1784.

He continued to write poems and songs and began a Commonplace Book in 1783.

Robert and Gilbert tried to keep the farm, but after its failure they moved to the farm at Mossgiel, near Mauchline in March, which they maintained for the next four years.

Robert Burns was initiated into Lodge St David Tarbolton on 4 July 1781, when he was 22. He was passed and raised on 1 October 1781. On 27 July 1784, Burns became Depute Master, which he held until 1788, often honoured with supreme command.

When he was received into Edinburgh Lodges, his occupation was recorded as a “poet”. In early 1787, the Edinburgh Masonic fraternity named him the Poet Laureate of the lodge - a title which has since been accepted by Freemasonry in general. Further editions of the Kilmarnock Edition were sponsored by the Edinburgh Freemasons, ensuring that his name spread around Scotland and subsequently to England and abroad.

During his tour of the South of Scotland, as he was collecting material for The Scots Musical Museum, he visited lodges throughout Ayrshire and became an honorary member of a number of them. 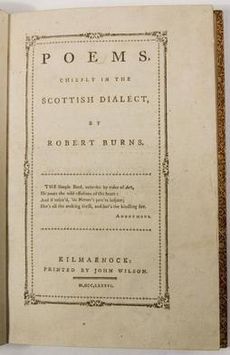 Title page of the Kilmarnock Edition

At the suggestion of his brother, Robert Burns published his poems in the volume Poems, Chiefly in the Scottish dialect, known as the Kilmarnock volume. The success of the work was immediate, and soon he was known across the country. 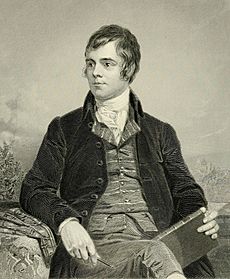 In Edinburgh in early 1787 he met James Johnson, a struggling music engraver and music seller with a love of old Scots songs and a determination to preserve them. Burns shared this interest and became an enthusiastic contributor to The Scots Musical Museum. The first volume of this was published in 1787 and included three songs by Burns. He contributed 40 songs to volume 2, and would end up responsible for about a third of the 600 songs in the whole collection as well as making a considerable editorial contribution. The final volume was published in 1803. 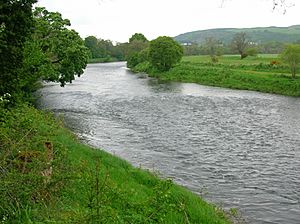 The River Nith at Ellisland Farm. 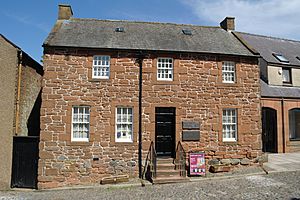 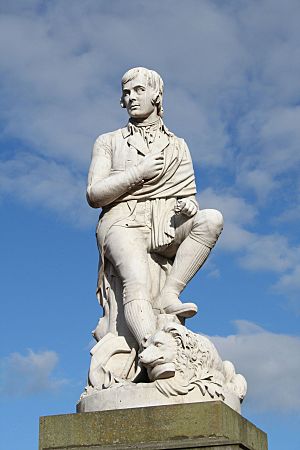 On his return to Ayrshire on 18 February 1788, he took a lease on the farm of Ellisland near Dumfries on 18 March (settling there on 11 June) but trained as a Gauger, or in English, an exciseman (an officer who inspects and rates articles that are liable to excise tax under British law.); should farming continue to prove unsuccessful. He was appointed duties in Customs and Excise in 1789 and eventually gave up the farm in 1791. Meanwhile, he was writing at his best.

He was asked to write lyrics for The Melodies of Scotland, he responded by contributing over 100 songs. He made major contributions to George Thomson's A Select Collection of Original Scottish Airs for the Voice as well as to James Johnson's The Scots Musical Museum.

Burns also worked to collect and preserve Scottish folk songs, sometimes revising, expanding, and adapting them. Many of Burns's most famous poems are songs with the music based upon older traditional songs. For example, Auld Lang Syne is set to the traditional tune Can Ye Labour Lea, A Red, Red Rose is set to the tune of Major Graham and The Battle of Sherramuir is set to the Cameronian Rant. 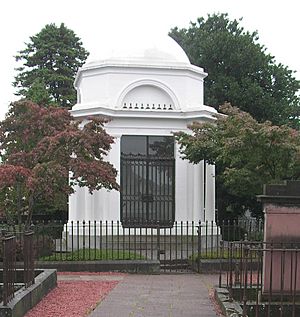 On the morning of 21 July 1796 Robert Burns died in Dumfries at the age of 37. The funeral took place on Monday 25 July 1796, also the day that his son Maxwell was born. A memorial edition of his poems was published to raise money for his wife and children.

He was at first buried in the far corner of St. Michael's Churchyard in Dumfries, however his body was eventually moved in September 1815 to its final resting place, in the same cemetery, the Burns Mausoleum. Jean Armour was laid to rest with him in 1834. 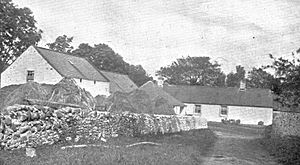 Burns's birthplace in Alloway is now a public museum as is his house in Dumfries. Significant 19th-century monuments to him stand in Alloway, Edinburgh and Dumfries. These are part of a large list of Robert Burns memorials and statues around the world.

Organisations include the Robert Burns Fellowship of the University of Otago in New Zealand, and the Burns Club Atlanta in the United States. Towns named after Robert Burns include Burns, New York, and Burns, Oregon.

In the suburb of Summerhill in Dumfries, the majority of the streets have names with Burns connotations. A BR Standard Class 7 steam locomotive was named after him, along with a later British Rail Class 87 electric locomotive, No.87035.

The Friends of Ellisland maintain Ellisland Farm as a museum and interpretation centre. 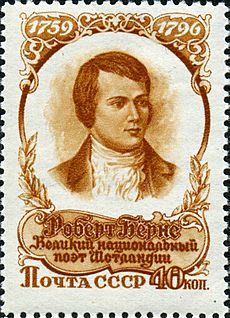 Russia was the first country in the world to honour Burns with a commemorative stamp in 1956. Burns became the ‘people’s poet’ of Russia. In Imperial times the Russian aristocracy were so out of touch with the peasantry that Burns, translated into Russian, became a symbol for the ordinary Russian people.

The Royal Mail has issued postage stamps commemorating Burns three times. In 1966, two stamps were issued, priced fourpence and 1 shilling and threepence, both carrying Burns's portrait. In 1996, an issue commemorating the bicentenary of his death comprised four stamps, priced 19 pence, 25 pence, 41 pence and 60 pence, and included quotes from Burns's poems.On the 22nd January 2009 two stamps were issued by the Royal Mail to commemorate the 250th anniversary of Burns's birth.

Burns is pictured on the £5 banknote (since 1971) of the Clydesdale Bank, one of the Scottish banks with the right to issue banknotes. On the reverse of the note there is a vignette of a field mouse and a wild rose which refers to Burns's poem "to a mouse". In September 2007, the Bank of Scotland redesigned their banknotes and Robert Burns's statue is now portrayed on the reverse side of new £5.

In 1996, a musical called Red Red Rose won third place at a competition for new musicals in Denmark. The musical was about Burns's life and he was played by John Barrowman. On 25 January 2008 a musical play about the love affair between Robert Burns and Nancy McLehose entitled "Clarinda", premiered in Edinburgh before touring Scotland. 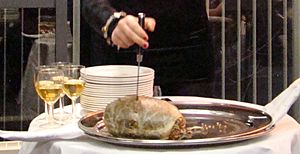 "Great chieftain o' the puddin-race!" – cutting the haggis at a Burns supper

Burns Night, in effect a second national day, is celebrated on Burns's birthday, 25 January, with Burns suppers around the world, and is more widely observed in Scotland than the official national day, St. Andrew's Day. The first Burns supper in The Mother Club in Greenock was held on what was thought to be his birthday on 29 January 1802; in 1803 it was discovered from the Ayr parish records that the correct date was 25 January 1759.

The basic format starts with a general welcome and announcements, followed with the Selkirk Grace. After the grace comes the piping and cutting of the haggis, when Burns's famous "Address to a Haggis" is read and the haggis is cut open. The event usually allows for people to start eating just after the haggis is presented. At the end of the meal, a series of toasts, often including a 'Toast to the Lassies', and replies are made. This is when the toast to "the immortal memory", an overview of Burns's life and work, is given. The event usually concludes with the singing of "Auld Lang Syne".

All content from Kiddle encyclopedia articles (including the article images and facts) can be freely used under Attribution-ShareAlike license, unless stated otherwise. Cite this article:
Robert Burns Facts for Kids. Kiddle Encyclopedia.