My luve is like a red red rose
That’s newly sprung in june;
O my Luve's like the melodie
That’s sweetly play'd in tune;

As fair art thou, my bonnie lass,
So deep in luve am I;
And I will luve thee still, my dear,
Till a’ the seas gang dry;

Till a’ the seas gang dry, my dear,
And the rocks melt wi’ the sun;
I will luve thee still, my dear,
While the sands o’ life shall run.

Origins of the song 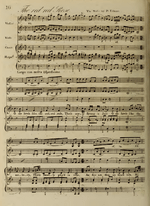 Publication in A Selection of Scots Songs Harmonized Improved with Simple and Adapted Graces by Peter Urbani, Edinburgh, c. 1793

Burns worked for the final seven years of his life on projects to preserve traditional Scottish songs for the future. In all, Burns had a hand in preserving over 300 songs for posterity, the most famous being "Auld Lang Syne". He worked on this project for James Johnson's the Scots Musical Museum (1787-1803) and for George Thomson's five-volume A Select Collection of Original Scottish Airs for the Voice. Burns had intended the work to be published as part of Thomson's selection. However, he wrote to a friend that Thomson and he disagreed on the merits of that type of song. "What to me appears to be the simple and the wild, to him, and I suspect to you likewise, will be looked on as the ludicrous and the absurd."

Instead, Burns gave the song to Scots singer Pietro Urbani who published it in his Scots Songs.

All content from Kiddle encyclopedia articles (including the article images and facts) can be freely used under Attribution-ShareAlike license, unless stated otherwise. Cite this article:
A Red, Red Rose Facts for Kids. Kiddle Encyclopedia.