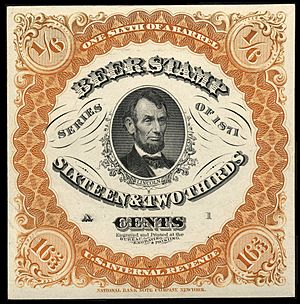 1871 U.S. Revenue stamp for 1/6 barrel of beer. Brewers would receive the stamp sheets, cut them into individual stamps, cancel them, and paste them over the bung of the beer barrel so when the barrel was tapped it would destroy the stamp. 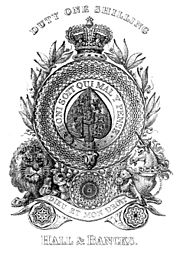 An excise or excise tax is an indirect tax charged on certain goods. As an indirect tax, they are charged by the producer or the merchant who then has to pay the government. For the same reason they are also not considered a sales tax. Excise taxes are commonly part of the retail price of a product such as gasoline, alcohol or cigarettes. Excise taxes may be charged by both state and federal governments.

Excise taxes are different from sales tax in two important ways. First, excise is charged only on specific goods. Sales tax can apply to most things a person might buy although certain jurisdictions may exempt food or clothing. Excise taxes are usually applied to luxury goods or products linked to health issues such as tanning salons or cigarettes. Secondly, sales tax is charged as a percentage of the purchase price. An excise tax is usually a fixed amount added to the price. It can be hard to tell how much excise tax a person pays because it is part of the purchase price. Sales tax is added to the price and is usually shown on the receipt.

In the United States, excise taxes make up about 4 percent of all federal revenues. This is lower than many other countries. The Constitution refers to excise tax as an indirect tax. Some states in the United States have different names for excise taxes. For example, in the state of Massachusetts the excise tax charged on automobiles is called an "ad valorem tax".

All content from Kiddle encyclopedia articles (including the article images and facts) can be freely used under Attribution-ShareAlike license, unless stated otherwise. Cite this article:
Excise tax Facts for Kids. Kiddle Encyclopedia.