Prestwick is a town in South Ayrshire on the south-west coast of Scotland, about 30 miles (50 km) south-west of Glasgow. It adjoins the larger town of Ayr on the Firth of Clyde coast, the centre of which is about 2 miles (3 km) south. It had a population of 14,901 at the 2011 census.

The town is served by Glasgow Prestwick Airport, which serves many European destinations as well as transatlantic and other international cargo flights.

The town was the first home of the Open Golf Championship, which was played on the Prestwick Old Course from 1860 to 1872.

Prestwick lies on the south-west coast of Scotland, approximately 30 miles (50 km) to the south west of Glasgow. It adjoins the larger town of Ayr, the centre of which is approximately 2 miles (3 km) south. To the north of Prestwick is the small village of Monkton. 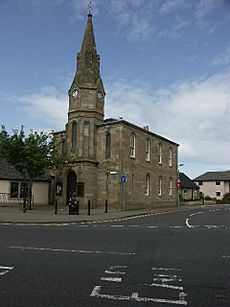 Prestwick's name comes from the Old English for, priest's farm: preost meaning "priest" and wic meaning "farm". The town was originally an outlying farm of a religious house. George T. Flom suggested that the name was of Old Norse origin. In this case, it would mean "priest's bay".

From Robert the Bruce to James VI, King of Scots, numerous Kings have traversed the coastal walks in and around Prestwick and Troon. Bruce is reputed to have been cured of leprosy by the waters of the well at St Ninians church. The well still exists behind the church.

Although it has been a Burgh of Barony for over a thousand years, it was a village until the railway arrived in the 1840s and the middle class from Glasgow started to build large houses along the coast.

On 28 August 1944, a Douglas C-54 Skymaster (42-72171) of the United States Army Air Forces, on approach into Glasgow Prestwick Airport in bad weather, crashed into a residential area of Prestwick, killing all 20 passengers and crew and five people on the ground.

Glasgow Prestwick International Airport, formerly Prestwick International Airport, opened in the 1930s. The airport was a transatlantic gateway for over half a century. It lies close to, and was the last European re-fuelling way-point on, the Great Circle route from London via Thule in Greenland to San Francisco - now no longer relevant for modern aircraft with non-stop range. During World War II the US Air Force had a base at the airport, and Elvis Presley set foot in the UK for the only time there in 1960, when his US Army transport aircraft stopped for refuelling en route from Germany. Though a period of decline in the 1980s and 1990s saw it lose its status as Scotland's primary transatlantic airport, Prestwick continues to handle US military flights. In July 2005, the airport was the main transport hub for world leaders attending the G8 conference in Gleneagles.

Prestwick is on the Ayrshire Coast Line between Glasgow Central and Ayr. Three trains per hour call at both Prestwick Town and Prestwick Airport stations, with additional services at peak times. Glasgow is approximately 50 minutes from Prestwick by rail. The line continues south to the port of Stranraer on the Wigtownshire coast, but a change of trains at Ayr is usually required.

The bus routes that run through Prestwick are usually run by Stagecoach Western including an express service to and from Glasgow known as the "X77".

The A79 road runs directly through the town, and is normally reached from the A77 trunk road between Glasgow and Stranraer, or from the A78 Ayrshire coastal route to Largs and Greenock.

The remains of the old parish church are located near Prestwick railway station. Thought to have originally been built in the 12th century, the small church building is now a ruin, and is surrounded by an ancient graveyard. Andrew Strath, "Keeper of the Green" at Prestwick Golf Club in the 1860s, is buried in the cemetery.

Prestwick has a 1-mile (1.6 km) long esplanade alongside Prestwick Bay, part of the Firth of Clyde. It has two children's playgrounds. At the north end Kid'zplay, an indoor activity centre, can be found next to the large play-area that was formerly a large open air swimming pool. Parallel to the esplanade is a line of large houses overlooking Arran.

The Prestwick Old Course hosted the first Open Golf Championship in 1860. The first twelve Open Championships were played there, from 1860 to 1872. (the Championship was not played in 1871). The town also hosts two other golf courses, St. Nicholas and St. Cuthberts. St. Nicholas is a traditional links course south of the town.

Prestwick St Ninians Golf Club (now defunct) was founded in 1912. The club continued until the 1950s.

On Ardayre Road in Prestwick is a Polish memorial. Its origins can be traced to a memorial erected by the Polish Air Force at Monkton. Discovered there in a dilapidated and vandalised condition, it was moved by Kyle and Carrick District Council in 1986 to its present site in the gardens of the RAFA Club which overlooks the sea. The memorial was repaired and placed on a new plinth. On 2 May 1987 the memorial was unveiled with a commemorative plaque by the Polish Naval, Air Force and Ex-Combattants' Associations. On the 45th anniversary of the sinking of the ORP Orkan (G90), 8 October 1988, another commemorative plaque was installed in memory of the Polish Navy, Merchant Navy and Coastal Command airmen who died in the Battle of the Atlantic. On Polish Navy Day (10 February) at the memorial, in a service that both Polish and Scottish ex-servicemen participate in, the memories of those that perished are remembered in a spirit of friendship and comradeship between Polish and Scottish ex-servicemen.

The Oval is a public park in the centre of Prestwick with two full size football pitches with indoor changing rooms, a tennis centre with three indoor courts and eight outdoor, a 25m indoor swimming pool and gym, indoor bowling green and cricket club. The park was gifted to the town in 1954.

Prestwick has four schools, three primary and one secondary, one of which is a denominational school, serving Prestwick and north of Prestwick. The schools are:

Prestwick is twinned with:

All content from Kiddle encyclopedia articles (including the article images and facts) can be freely used under Attribution-ShareAlike license, unless stated otherwise. Cite this article:
Prestwick Facts for Kids. Kiddle Encyclopedia.