Troon is a town in South Ayrshire. It is situated on the west coast of Scotland, about 8 miles (13 km) north of Ayr and 3 miles (5 km) northwest of Glasgow Prestwick Airport. Lying across the Firth of Clyde, the Isle of Arran can be seen. Troon is also a port with freight services at its yacht marina. Up until January 2016, P&O operated a seasonal ferry service to Larne. In May 2006, a ferry service to Campbeltown was added, although this was withdrawn the following year.

The name Troon is likely from a Brythonic or Pictish name cognate with Welsh trwyn ("nose, cape"). When Scottish Gaelic became the main language, it is possible that the Gaelic form An t-Sròn ("the nose") pronounced [ənˠ̪ t̪ʰɾɔːn] was used for the name Troon. Since the words sròn and trwyn are cognate, it could have been easily adapted from one language to the other. This is similar to the Gaelic name of Stranraer (An t-Sròn Reamhar, the fat nose), which lies further south on the coast. However, it is not certain if An t-Sròn was the Gaelic name, as its usage cannot be traced back any further than Johnston’s Place-names of Scotland (1932). It is more likely that a gaelicized respelling, such as An Trùn, was used.

The name An Truthail was used by Gaelic speakers on nearby Arran Island up until the 20th century.

Troon is famous for its Royal Troon golf course, one of the hosts to the Open Golf Championship. The course is chosen to host this annual event roughly every seven years. 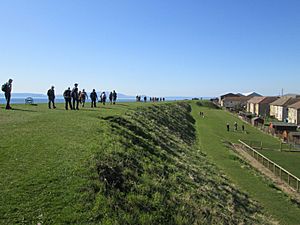 The Ballast Bank shelters houses and the sawmill of Adam Wilson & Sons Ltd. at Harbour Road. 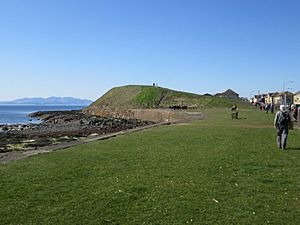 View from the esplanade to the Ballast Bank

The Duke of Portland took the existing natural harbour on the north side of the headland and added docks. Later improvements included increasing the protection afforded by the headland with an artificial "ballast bank" made from the dumped ballast of incoming merchant ships. And from 1812 Troon was the terminus of a horse-drawn railway connecting it to the Duke's coal mines around Kilmarnock. This was not licensed for passengers, a minor technicality evaded by weighing those wishing to travel and charging them freight rates.

Troon Harbour played a notable part in the development of the town for many years. It was home to the Ailsa Shipbuilding Company, which constructed many vessels for worldwide customers but mainly small passenger and various merchant vessels. The fishing fleet from Ayr moved to Troon Harbour and a revitalisation of the abandoned section of the harbour started. An approach road was constructed to connect to a P&O terminal which operates a service to Ireland. The Seacat high speed ferry service briefly operated from Troon Harbour but has now ended.

The town is served by Troon railway station. Troon (old) railway station was one of the first passenger stations in Scotland as part of the Kilmarnock and Troon Railway. A line had been there previously used by the Duke of Portland for the transport of coal from the collieries in East Ayrshire but was upgraded to run Steam locomotives. Troon has its own secondary school, Marr College.

Troon is also the birthplace of C. K. Marr, who left a considerable fortune upon death to the people of Troon which was used to construct the town's only secondary school Marr College.

Troon has over the past few years become a popular place for Kitesurfing. The strong winds coming from the Atlantic and from the north down the Firth of Clyde make it an ideal spot.

Troon also hosts an annual music Festival held in the autumn known as Live@Troon. The event is run by a charitable trust for the promotion of the town and local musical talent.

The artist's impression and the theoretical master plan for Troon that the Duke of Portland had drawn up was almost on as grand a scale, relative to its size, as that of Edinburgh's New Town. Certainly, the broad streets with a grid network and ample space for civic amenities created for a thriving community built around the industry of the harbour. Troon's prosperity allowed this confident plan to be proposed. The drawing shows two spires, the taller spire was of that proposed by Troon Parish Church. Although the new building was erected in 1895 the spire was never completed. To the right a smaller spire indicates Portland Street United Free Church, which sat behind where WH Smith is today. The first railway in Scotland (Troon to Kilmarnock 1811) is clearly showing in the background. It was the Glasgow and South Western Railway in 1892 who altered this plan by building a loop to bring passengers closer to the beach and town. The park sadly never came to pass but public spaces on the promenade, (where the bandstand was built), The Ballast Bank and Fullarton ground allow residents and visitors much scope for leisure. The industrial units to the right of the harbour line towards Barassie were the Gas Works and Slaughter House.

Troon harbour seen over the North Sands and Pan Rocks, with HSC Express at the P&O Ferries terminal, and log storage visible.

SeaCat opened passenger services from Troon in 1999, with catamaran ferries to Ireland. They were followed by P&O Irish Sea in 2003. SeaCat closed the following year.

Up until 2015, P&O Ferries operated seasonal sailings with the high speed catamaran HSC Express: the term 'SeaCat' is often used to refer to the P&O service.

P&O announced on 13 January 2016 that the Troon–Larne service was to close with immediate effect.

The former SeaCat terminal is currently fenced off and is being used as log storage.

Fullarton House was built by William Fullarton of that ilk in 1745 and altered by his son, however it was demolished in 1966 by the council who had been unable to maintain the building after purchasing it in 1928.

The entrance route had been changed by the Duke of Portland and the house design altered so that the back became the front, with grand views opened up of the Isle of Arran and Firth of Clyde. After centuries of occupation the Fullarton lines possession had thus come to an end when the Duke of Portland purchased the property in 1805. He lived here for a while as his principal residence in Scotland, however he had a greater interest in developing Troon harbour and the Kilmarnock and Troon Railway.

The grounds are now a park with some signs of the old house still apparent, such as the magnificent stable block, the ornamental pediments, walled gardens, doocot and an ice house. Reed Loch was located near Lochgreen House and was used latterly as a curling pond. 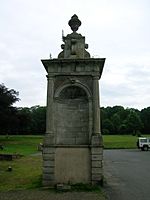 A pediment from the old Fullarton House.

The name is thought to come from the office of 'Fowler to the King', the purpose of which was to supply wild-fowl to the King as required. The dwelling which came with the post was called Fowlertoun and the family may have eventually adopted the name. The Fullarton's of Angus had been required by Robert I to supply him with wild-fowl at his castle of Forfar.

Alanus de Fowlertoun was in possession of the lands shortly before his death in 1280 and the family continued in a nearly unbroken line from father to son. William Fullarton, the builder of the house, inherited the estate from his grandfather in 1710, he having inherited it from his brother in turn. Colonel Fullarton died in 1808, the last Fullarton of that Ilk laird. He wrote in 1793 the seminal A General View of the Agriculture in the County of Ayr and was one of the few on record to praise Robert Burns's skills as a farmer, commenting favourably on a method of dishorning cattle which the poet had demonstrated. Burns is said to have visited Fullarton.

The Fullarton grotto and stables

Robert II granted the old Crosbie estate to the Fullartons in 1344 and by the 18th century the old castle was partly demolished and converted into an ice house for Fullarton House, with a doocot nearby. In 1969 more of the ice house was demolished to make it safe. The building had been known as Crosby Place and later became Fullarton House, not long before the new building of the same name replaced it.

Over the centuries the castle was rebuilt three times, in the same typical square design as seen at Dundonald Castle. The remains today mainly represent the Castle's dungeon. Many of Crosbie Castle's stones were used in the construction of the first Fullarton House. The dungeon, had an underground stream, making it the ideal cold storage cellar or ice house. 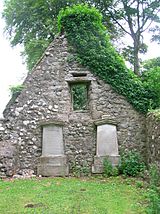 First recorded in 1229, the present structure dates from 1691. Tradition claims that the roof blew off on the day in 1759 that Robert Burns was born and it was left to become a ruin. One of the graves is that off David Hamilton of Bothwellhaugh, son of, James, alleged assassin of the Regent Moray, bastard son of James V. This event occurred in 1570 and David died in 1619. David Fullarton of that Ilk had married David's sister.

Constructed on the site of the original chapel, the name comes from the Anglo-Saxon word 'Crossbye', signifying the dwelling of the cross; a fairly common placename. The cemetery dates from circa 1240 and was held in secular times by Fullarton of Crosbie in the 14th century after being passed on from relatives. Records indicate that this ground was used by a holy order before the Fullartons arrived in the area. The chapelry of Crosbie, together with that of Richardstoun (Riccartoun) were attached to Dundonald and were granted by the second Walter Stewart to the short lived Gilbertine Convent which he had founded at Dalmulin in 1238. The convent was dis-established in 1238 and the chapel passed to the monks of Paisley Abbey.

The cemetery was the burial ground for Troon until 1862 and family lairs were still in use until after the First World War. On the other side of the road, the remains of the church manse can still be seen (2009). The 'Wrack Road' was the Fullarton Estate estate road used by tenants who took their carts down to the shore to collect seaweed or wrack as fertilizer and it was the main road from Troon for funerals going to Crosbie.

Janet McFadzean was buried in Crosbie cemetery in 1761 and the front of her tombstone reads: Here lyes the corps of Janet McFadzean, Spous of William McFadzean, Quarter-Master Sergean in Lovetenan General Homs Regiment of Sol., who died 22 August 1761, aged 27 years.

The reverse side reads:

Views of the cemetery

An epistle by John Laing suggests that Crosbie Kirk is haunted:

All content from Kiddle encyclopedia articles (including the article images and facts) can be freely used under Attribution-ShareAlike license, unless stated otherwise. Cite this article:
Troon Facts for Kids. Kiddle Encyclopedia.