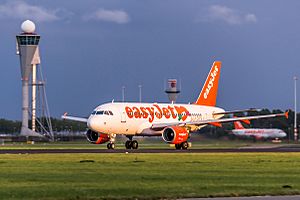 A budget airline or low-cost carrier is an airline which tries to keep its prices and fares lower than competitors. It usually does this by not offering services like free food and drink on a flight and keeping fines from airports low by keeping on time. They also usually only use one type of aircraft. Budget airlines were made famous by Southwest Airlines in the USA which only use Boeing 737 aircraft.

All content from Kiddle encyclopedia articles (including the article images and facts) can be freely used under Attribution-ShareAlike license, unless stated otherwise. Cite this article:
Budget airline Facts for Kids. Kiddle Encyclopedia.