The Boeing 787 Dreamliner is a passenger aircraft made by Boeing. Its first flight took place on 15 December 2009. It was planned to be released earlier, but the first passenger flight of the airplane was in October 2011. Because of this some airlines will get their aircraft nearly 30 months late.

The aircraft has had some problems. It is being reviewed by the FAA and the Japanese aviation agency. On January 16, 2013, the FAA said that no 787s were allowed to fly in the U.S. The EASA, Japanese Transport Ministry, India's Directorate General of Civil Aviation (DGCA), and Chile's Dirección General de Aeronautica Civil (DGAC) also said that the 787 was not allowed to fly in their country.

In the late 1990s Boeing wanted to make a plane called the Sonic Cruiser, which would go very fast. According to Boeing, the 787 consumes 20% less fuel than the similarly-sized 767. But after the September 11, 2001 attacks fuel prices went up, so airlines wanted more efficient planes rather than faster ones. Boeing cancelled the Sonic Cruiser and replaced it in January 2003 with the "7E7," which was the code name for the 787 at the time. In July 2003, Boeing decided to call the new plane the "Dreamliner."

The 787 was designed to be much more efficient. It did this by using composite to build most of the plane instead of aluminum, which made the plane lighter. It also used two new engine types, the General Electric GEnx and the Rolls-Royce Trent 1000. According to Boeing this made the 787 20% more efficient than the 767.

In December 2006 Boeing said that the 787 was heavier than they expected, so the plane was delayed. Also, Boeing had tried to shorten the time to make the plane by asking parts suppliers to assemble parts of the plane. These parts manufacturers were not used to the extra work though, and this delayed the 787 even more.

Boeing started to test the 787 on the ground. They found more problems and the plane was delayed even more. Finally on December 15, 2009 the 787 went on its first flight. Boeing began testing the plane in the air. There were more problems, like a failure of one of the Rolls-Royce Trent 1000 engines, and an in flight fire, which delayed the plane even more. Some airlines wanted to be paid back for all the delays. Finally in July 2011, Boeing delivered their first 787 to ANA.

The Boeing 787 has a common type rating as the Boeing 777, which means that a pilot who trains in one of the planes can easily switch to the other with very little additional training.

One of the most interesting features of the 787 is the sawtooth pattern at the back of the engine. According to Boeing this makes the plane quieter for people on the plane and on the ground. The engines also have sound absorbing material at the front of the engine to make the plane even quieter. 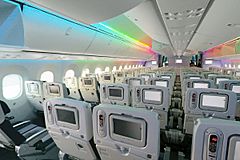 The inside of the 787 is the most noticeable feature. The windows are much bigger on the 787 than on other planes because the plane is made mostly of composite, which is stronger than the aluminum which is used on most other planes. Also, the windows of the plane don't use slide-down shades like most planes. Instead they have buttons which can make the window darker or lighter. The inside of the plane also uses LED lighting. This lets the plane change the colors of the lights inside.

The -3 was going to be the smallest and would have the shortest range at about 5000 km, and would fly about 290 people. It would have replace the Boeing 747-400D (the D stands for domestic, which means flights that take-off and land in the same country) that was used by two Japanese airlines. At first these Japanese airlines had ordered the 787-3, but since the plane was late the airlines cancelled their orders. This made Boeing scrap the 787-3.

All content from Kiddle encyclopedia articles (including the article images and facts) can be freely used under Attribution-ShareAlike license, unless stated otherwise. Cite this article:
Boeing 787 Dreamliner Facts for Kids. Kiddle Encyclopedia.