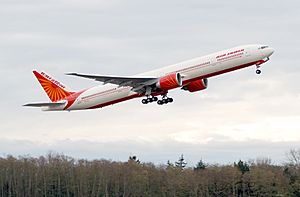 Air India was founded in 1932 under the name Tata Air Line by the company Tata Sons. In 1946 the name of the company changed to Air India International. Its name changed again in 1953, this time to the current name Air India. By that time Air India was owned by the government of India. From 1999 a lot of attempts were made to merge India Air and Indian Airlines. Air India kept its name regardless of the merge.

All content from Kiddle encyclopedia articles (including the article images and facts) can be freely used under Attribution-ShareAlike license, unless stated otherwise. Cite this article:
Air India Facts for Kids. Kiddle Encyclopedia.