County Cork (Irish: Contae Chorcaí) is the largest and southernmost county of Ireland. It lies in the province of Munster and is named after the city of Cork (Irish: Corcaigh). Cork County Council is the local authority for the county. Its largest settlements are Cork City, Ballincollig and Carrigaline. In 2016, the county's population was 542,196, making it the third most populous county in Ireland.

County Cork is located in the province of Munster. It borders four other counties: Kerry to the west, Limerick to the north, Tipperary to the north-east and Waterford to the east. Cork is the largest county in the state by land area. It is the largest of Munster's 6 counties by both population and area. The population of Cork city stood at 125,622 in 2016. The population of the entire county is 542,196 making it the state's second most populous county and the third most populous county on the island of Ireland. The remit of Cork County Council includes some suburbs of the city not within the area of Cork City Council.

There are 24 historic baronies in the county—the most of any county in Ireland. While baronies continue to be officially defined units, they are no longer used for many administrative purposes. Their official status is illustrated by Placenames Orders made since 2003, where official Irish names of baronies are listed.

There are 253 civil parishes in the county. Townlands are the smallest officially defined geographical divisions in Ireland; there are approximately 5447 townlands in the county. 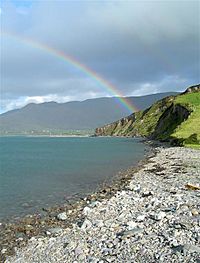 The county's main mountain ranges include: the Slieve Miskish and Caha Mountains on the Beara Peninsula, the Ballyhoura Mountains on the border with Limerick and the Shehy Mountains which contain Knockboy (706 m) the highest point in Cork. The Shehy Mountains are on the border with Kerry and may be accessed from the area known as Priests Leap, near the village of Coomhola. The Galtee Mountains are located across parts of Tipperary, Limerick and Cork and are Ireland's highest inland mountain range. The upland areas of the Ballyhoura, Boggeragh, Derrynasaggart and the Mullaghareirk Mountain ranges add to the range of habitats found in the county. Important habitats in the uplands include blanket bog, heath, glacial lakes and upland grasslands. Cork has the 13th highest county peak in Ireland.

The three great rivers: the Bandon, the Blackwater and the Lee, and their valleys dominate central Cork. Habitats of the valleys and floodplains include woodlands, marshes, fens and species-rich limestone grasslands. The river Bandon flows through many towns including Dunmanway in the west to the town of Bandon before draining into Kinsale Harbour on Ireland's south coast. Cork has two well-known sea loughs, Lough Hyne and Lough Mahon, and also contains many small lakes. An area has formed where the River Lee breaks into a network of channels weaving through a series of wooded islands. There are 85 hectares of swamp around Cork's wooded area. The Environmental Protection Agency (EPA) carried out a survey of surface waters in County Cork between 1995 and 1997 which identified 125 rivers and 32 lakes covered by the regulations. 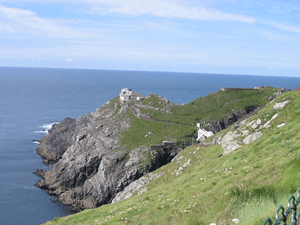 Mizen Head: the most south-westerly point of both Cork and Ireland.

Cork has a mountainous and flat landscape with many beaches and sea cliffs along its coast. The southwest of Ireland is known for its peninsulas and some in Cork include the Beara Peninsula, Sheep's Head, Mizen Head and Brow Head. Brow Head is the most southerly point of mainland Ireland. There are many islands off the coast of the county, in particular off West Cork. Carbery's Hundred Isles are the islands around Long Island Bay and Roaringwater Bay. Fastnet Rock lies in the Atlantic Ocean 11.3 km south of mainland Ireland, making it the most southerly point of Ireland. Many notable islands lie off Cork, including Bere, Great, Sherkin and Cape Clear. Cork has 1,094 km of coastline, the second-longest coastline of any county after Mayo, which has 1,168 km.

Like many parts of Munster, Cork has rich fertile agricultural land and many bog and peatlands. Cork has approximately 74,000 hectares of peatlands, which amounts to 9.8% of the county's total land area. And the county contains approximately 79,188 hectares (195,680 acres) of forest and woodland area, or 10.5% of Corks land area, higher than the national average of 9%.

The hooded crow, corvus cornix is a common bird, particularly in areas nearer the coast. Due to this bird's ability to (rarely) prey upon small lambs, the gun clubs of Cork County have killed a large number of these birds in modern times. A collection of the marine algae is housed in the Herbarium of the botany department of the University College Cork. Parts of the South West coastline are hotspots for sightings of rare birds, with Cape Clear being a prime location for bird watching. The island is also home to one of only a few gannet colonies around Ireland and the UK. A major attraction to the coastline of Cork is whale watching, with sightings of fin whales, basking sharks, pilot whales, minke whales, and other species being frequent.

The county is colloquially referred to as "The Rebel County", although uniquely Cork does not have an official motto. This name has 15th Century origins, but from the 20th century the name has been more commonly attributed to the prominent role Cork played in the Irish War of Independence (1919–1921) when it was the scene of considerable fighting. In addition, it was an anti-treaty stronghold during the Irish Civil War (1922–23). Much of what is now county Cork was once part of the Kingdom of Deas Mumhan (South Munster), anglicised as "Desmond", ruled by the MacCarthy Mór dynasty. After the Norman Invasion in the 12th century, the McCarthy clan were pushed westward into what is now West Cork and County Kerry. Dunlough Castle, standing just north of Mizen Head, is one of the oldest castles in Ireland (A.D. 1207). The north and east of Cork were taken by the Hiberno-Norman FitzGerald dynasty, who became the Earls of Desmond. Cork City was given an English Royal Charter in 1318 and for many centuries was an outpost for Old English culture. The Fitzgerald Desmond dynasty was destroyed in the Desmond Rebellions of 1569–1573 and 1579–83. Much of county Cork was devastated in the fighting, particularly in the Second Desmond Rebellion. In the aftermath, much of Cork was colonised by English settlers in the Plantation of Munster.

In 1491 Cork played a part in the English Wars of the Roses when Perkin Warbeck, a pretender to the English throne, landed in the city and tried to recruit support for a plot to overthrow Henry VII of England. The Cork people fought with Perkin because he was French and not English, they were the only county in Ireland to join the fight. The mayor of Cork and several important citizens went with Warbeck to England but when the rebellion collapsed they were all captured and executed. Cork's nickname of the 'rebel city' originates in these events.

In 1601 the decisive Battle of Kinsale took place in County Cork, which was to lead to English domination of Ireland for centuries. Kinsale had been the scene of a landing of Spanish troops to help Irish rebels in the Nine Years' War (1594–1603). When this force was defeated, the rebel hopes for victory in the war were all but ended. County Cork was officially created by a division of the older County Desmond in 1606. 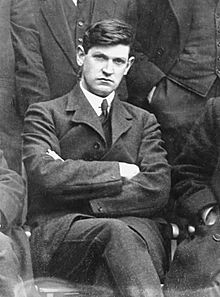 In the 19th century, Cork was a centre for the Fenians and for the constitutional nationalism of the Irish Parliamentary Party, from 1910 that of the All-for-Ireland Party. The county was a hotbed of guerrilla activity during the Irish War of Independence (1919–1921). Three Cork Brigades of the Irish Republican Army operated in the county and another in the city. Prominent actions included the Kilmichael Ambush in November 1920 and the Crossbarry Ambush in March 1921. The activity of IRA flying columns, such as the one under Tom Barry in west Cork, was popularised in the Ken Loach film The Wind That Shakes The Barley. On 11 December 1920 Cork City centre was gutted by fires started by the Black and Tans in reprisal for IRA attacks. Over 300 buildings were destroyed, many other towns and villages around the county suffered a similar fate including Fermoy.

During the Irish Civil War (1922–23), most of the IRA units in Cork sided against the Anglo-Irish Treaty. From July to August 1922 they held the city and county as part of the so-called Munster Republic. However, Cork was taken by troops of the Irish Free State in August 1922 in the Irish Free State offensive, that included both overland and seaborne attacks. For the remainder of the war, the county saw sporadic guerrilla fighting until the Anti-Treaty side called a ceasefire and dumped their arms in May 1923. Michael Collins, a key figure in the War of Independence, was born near Clonakilty and assassinated during the civil war in Béal na Bláth, both in west Cork.

County Cork has two Gaeltacht areas where the Irish language is the primary medium of everyday speech. These are Múscraí (Muskerry) in the north of the county, especially the villages of Cill Na Martra (Kilnamartyra), Baile Bhúirne (Ballyvourney), Cúil Aodha (Coolea), Béal Átha an Ghaorthaidh (Ballingeary), and Oileán Chléire (Cape Clear Island), an island in the west.

There are 14,829 Irish language speakers in County Cork with 3,660 native speakers in the Cork Gaeltacht. In addition there are 6,273 who attend the 21 Gaelscoileanna and six Gaelcholáistí all across the county. According to the Irish Census 2006 there are 4,896 people in the county who identify themselves as being daily Irish speakers outside of the education system.

Ballingeary is an important centre for Irish language tuition, with an active summer school, Coláiste na Mumhan, or the College of Munster.

The song "The Banks Of My Own Lovely Lee" is traditionally associated with the county. It is often heard at GAA and other sports fixtures involving the county. 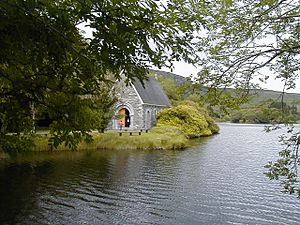 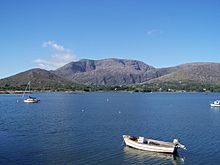 One of many bays in Cork.

Attractions include the Blarney Stone and Cobh, the port where many Irish emigrants boarded for their voyage to Australia, Canada, New Zealand, South Africa or the United States and also the last stop of the Titanic, before departing on its fated journey. It is home to the World's Oldest Yacht Club, the Royal Cork Yacht Club in Crosshaven.

Fota Island is a tourist attraction due to Fota Wildlife Park which is the only wildlife park in Ireland, Fota House and Gardens, and the Fota Golf Club and Resort; a European Tour standard golf course which has also hosted the Irish Open in recent times.

West Cork is a popular destination for British, German, French and Dutch tourists, who visit the small villages and islands at Carbery's Hundred Isles including Sherkin Island, Oileán Chléire or Cape Clear Island and Dursey Island. Mizen Head, the "southwesternmost point in Ireland" is also in West Cork, as is Sheep's Head. Lough Hyne (Irish: Loch Oighinn) is a marine lake in West Cork, Ireland, about 5 km southwest of Skibbereen. West Cork is noted for its rugged natural beauty, beaches and social atmosphere.

Cork's main transport is serviced from:

Main page: List of towns and villages in County Cork

All content from Kiddle encyclopedia articles (including the article images and facts) can be freely used under Attribution-ShareAlike license, unless stated otherwise. Cite this article:
County Cork Facts for Kids. Kiddle Encyclopedia.