Skibbereen ( Irish: An Sciobairín), is a town in County Cork, Ireland. It is located on the N71 national secondary road. The name "Skibbereen" (sometimes shortened to "Skibb") means "little boat harbour". The River Ilen runs through the town; it reaches the sea about 12 kilometers away, at the seaside village of Baltimore. As of the Census of Ireland 2011, the population of the town (not including the rural hinterland) was 2,568.

Prior to 1600 most of the land in the area belonged to the native MacCarthy Reagh dynasty - today McCarthy remains the town's most common surname.

500 years after the Black Death, the region again experienced a significant famine in the years 1845-52, a time referred to as The Great Hunger or Great Famine (Irish: an Gorta Mór). The Skibbereen Heritage Centre estimates that 8,000 to 10,000 victims of 'The Great Famine' are buried in the famine burial pits of Abbeystrewery cemetery close to the town. While there is some question on the accuracy of census data from the famine era, records indicate a drop of population from 58,335 in 1841 to 32,412 in 1861. 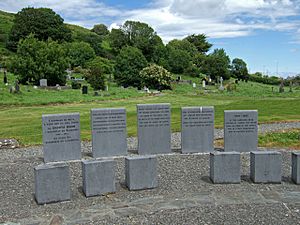 Skibbereen is also the name of a song about the Famine, and the impact it and the British Government had on the people of Ireland. The song, known as Dear Old Skibbereen, takes the form of a conversation between a father and a son, in which the son asks his father why he fled the land he loved so well.

A permanent exhibition to commemorate the memory of the victims of the Great Famine is sited at the Skibbereen Heritage Centre. Skibbereen was also the focal point of Ireland's first National Famine Memorial Day on 17 May 2009. The town was selected as it was in one of the areas worst affected by the Great Famine. The National Famine Commemoration Committee agreed that the centerpiece of the memorial day would rotate between the Four Provinces on an annual basis. 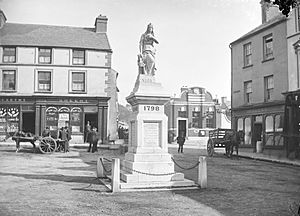 The Skibbereen Arts Festival occurs annually, taking place at the end of July and including community based projects as well as a mix of national and international films, theatre, visual art and music acts.

A number of different music events are held each year, with several bars and venues in town (including "Baby Hannah's") hosting musical acts.

Just outside Skibbereen is Tragumna beach, and the town's location near the coast means that sea fishing, scuba diving, sailing, and kayaking are possible locally.

All content from Kiddle encyclopedia articles (including the article images and facts) can be freely used under Attribution-ShareAlike license, unless stated otherwise. Cite this article:
Skibbereen Facts for Kids. Kiddle Encyclopedia.