Kids Encyclopedia Facts
This page is about the village in Ireland. For other uses, see Baltimore (disambiguation).

Although the name Baltimore is an anglicisation of the Irish Baile an Tí Mhóir meaning "town of the big house", the Irish-language name for Baltimore is that of the O'Driscoll castle, Dún na Séad or Dunashad ("fort of the jewels"). The restored castle is open to the public and overlooks the town.

In ancient times, Dunashad was considered a sanctuary for druids and the place name is associated with Bealtaine.

Baltimore enters history as a seat of one of Ireland's most ancient dynasties, the once mighty Corcu Loígde, former Kings of Tara and Kings of Munster.

An English colony was founded here about 1605 by Sir Thomas Crooke, 1st Baronet, with the blessing of King James I of England; Crooke leased the lands from Sir Fineen O'Driscoll, head of the O'Driscoll clan. It was a lucrative centre of the pilchard fisheries, and in the early 1600s a great pirate base, where not only all the justices including the vice-admiral of Munster, but the entire population, were involved; all the women of Baltimore were reputed to be either wives or mistresses of pirates. These activities were unaffected by official discouragement under King James, but English piracy generally declined shortly thereafter, partly due to competition from Barbary pirates. In 1607 Baltimore became a market town, with the right to hold a weekly market and two annual fairs. Control passed after Crooke's death to Sir Walter Coppinger.

The town was depopulated in 1631 in the Sack of Baltimore, a raid by Barbary pirates from either Algeria and Salé (Morocco). 237 English settlers and local Irish people were sold into slavery[6][6][6][6][[slavery|]][6], of whom only two or three ever saw Ireland again. Reminders of the incident still exist in the form of pub names, like the "Algiers Inn". The survivors fled to Skibbereen, and Baltimore for generations was almost deserted. A slow recovery began in the 18th century, and by the early 1800s the village was starting to prosper again, only to suffer further great losses in the Great Famine.

It is believed that Napoleon obtained his famous white mare Intendant from the area.

Baltimore was granted borough status in 1612 with a town government consisting of a "sovereign" (Sir Thomas Crooke) and twelve burgesses. It returned two members to the Irish House of Commons 1613-1801. 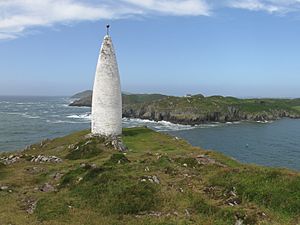 One of the most notable landmarks in the area is the Baltimore Beacon, also known as Lot's wife. Towards the end of July 1847, Commander James Wolfe, R.N., informed the Ballast Board that he had recently completed a survey of Baltimore Harbour and noticed the destruction of the beacon on the eastern point of the southern entrance to the harbour.

George Halpin, the Board's inspector was ordered to report the matter which he did the following month, stating that the original, locally built beacon was too small, poorly built, and had been vandalised. He recommended a large and properly constructed beacon with which the Board concurred.

Almost a year passed, 6 July 1848, before the Board requested the secretary to seek permission from Lord Carbery for a piece of ground ten yards in diameter, on which to build the beacon. By the end of July a reply had been received from Mr. Arthur Perry-Aylmer informing the Board that Lady Carbery of Castle Freke near Rosscarbery had given her full permission to either rebuild or re-construct the existing beacon and granted free access as the beacon was a matter of such vast importance to fishermen and others.

By February 1849 inspector George Halpin reported that the masonry work of the beacon was complete but the iron staff and vane still had to be placed on top.

The conspicuous conical white painted Baltimore Beacon, sometimes called the 'pillar of salt' or 'Lot's wife' is approximately 50 feet (15.2m) high and 5 yards (4.6m) in diameter at the base. The vent, mentioned by Halpin in 1849 was obviously vulnerable and at a later date was replaced by a sphere.

Baltimore attracts many visitors and the resident population booms in summer months due to the large number of summer homes that have been built in the area in the last ten years. Baltimore is particularly attractive as a destination to visitors interested in sailing, fishing and exploring the countryside. Baltimore is a great base from which to explore Cape Clear, Sherkin and Lough Hyne. Lough Hyne, Ireland's first marine nature reserve is only 5 km from town. Baltimore also has become a very popular venue for scuba diving, due largely to the number and variety of shipwrecks in the bay. These include a Second World War submarine (U-260), the bulk carrier Kowloon Bridge and the Alondra from 1916.

There is a wide range of accommodation available in Baltimore, hotels: Casey's of Baltimore, hotel, Waterfront Hotel and a host of bed and breakfasts such as Channel View, the Fastnet, the Old Post House, the Slip Way, the Algiers Inn, Bushes bar, Rolf's Hostel Self Catering as well as many others.

The local GAA club is Ilen Rovers, which was formed in 1973 and consists of the surrounding parish and that of Lisheen and Kilcoe. They compete in the Cork County Senior Football Championship and appeared in the Senior final in 2007 losing to Nemo Rangers. The local soccer team Baltimore FC also known as the Crabs were established in 2006. They won division 2 in 2010 and are currently a division 1 side in the West Cork League. Sailing is also a popular activity in Baltimore. Courses are held in the summer months for both adults and children.

All content from Kiddle encyclopedia articles (including the article images and facts) can be freely used under Attribution-ShareAlike license, unless stated otherwise. Cite this article:
Baltimore, County Cork Facts for Kids. Kiddle Encyclopedia.