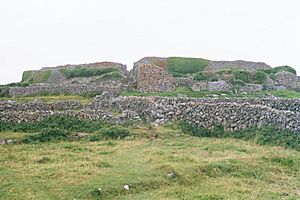 A ring fort on Inishman 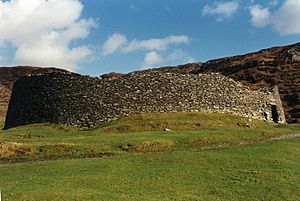 A ring fort is a fortified settlement. Ring forts were made to protect villages, mostly in the Middle Ages. In Ireland where many such forts can be found, they are also known as ráth, caiseal, cathair and dún in the early Irish sources.

A ráth (anglicised rath), was made of earth, caiseal (northwestern Ireland, anglicised cashel) and cathair (southwestern Ireland) were built of stone. A dun is a more prestigious site, the seat of some kind of ruler, the term is applied to promontory forts as well.

All content from Kiddle encyclopedia articles (including the article images and facts) can be freely used under Attribution-ShareAlike license, unless stated otherwise. Cite this article:
Ringfort Facts for Kids. Kiddle Encyclopedia.