County Tyrone (from Irish: Tír Eoghain, meaning "land of Eoghan") is one of the six historic counties of Northern Ireland. It is also one of the thirty-two traditional counties of Ireland, and lies within the historic province of Ulster. It is no longer used as an administrative division for local government, but retains a strong identity in popular culture.

The name Tyrone is derived from Irish Tír Eoghain, meaning 'land of Eoghan', the name given to the conquests made by the Cenél nEógain from the provinces of Airgíalla and Ulaid. Historically, it was anglicised as Tirowen or Tyrowen, which are closer to the Irish pronunciation.

Historically Tyrone stretched as far north as Lough Foyle, and comprised part of modern-day County Londonderry east of the River Foyle. The majority of County Londonderry was carved out of Tyrone between 1610–1620 when that land went to the Guilds of London to set up profit making schemes based on natural resources located there. Tyrone was the traditional stronghold of the various O'Neill clans and families, the strongest of the Gaelic Irish families in Ulster, surviving into the seventeenth century. The ancient principality of Tír Eoghain, the inheritance of the O'Neills, included the whole of the present counties of Tyrone and Londonderry, and the four baronies of West Inishowen, East Inishowen, Raphoe North and Raphoe South in County Donegal.

In 1608 during O'Doherty's Rebellion areas of the country were plundered and burnt by the forces of Sir Cahir O'Doherty following his destruction of Derry. However, O'Doherty's men avoided the estates of the recently fled Earl of Tyrone around Dungannon, fearing Tyrone's anger if he returned from his exile.

With an area of 3,155 square kilometres (1,218 sq mi), Tyrone is the largest county in Northern Ireland. The flat peatlands of East Tyrone border the shoreline of the largest lake in the British Isles, Lough Neagh, rising gradually across to the more mountainous terrain in the west of the county, the area surrounding the Sperrin Mountains, the highest point being Sawel Mountain at a height of 678 m (2,224 ft). The length of the county, from the mouth of the River Blackwater at Lough Neagh to the western point near Carrickaduff hill is 55 miles (89 km). The breadth, from the southern corner, southeast of Fivemiletown, to the northeastern corner near Meenard Mountain is 37.5 miles (60.4 km); giving an area of 1,260 square miles (in 1900). Annaghone lays claim to be the geographical centre of Northern Ireland. 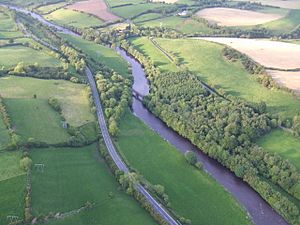 Blackrock Bridge near Newtownstewart, carrying the closed GNR mainline that ran through the county.

It is one of four counties in Northern Ireland which currently has a majority of the population from a Catholic community background, according to the 2011 census. In 1900 County Tyrone had a population of 197,719, while in 2011 it was 177,986.

There is the future possibility of the line being reopened to Dungannon railway station from Portadown.

All content from Kiddle encyclopedia articles (including the article images and facts) can be freely used under Attribution-ShareAlike license, unless stated otherwise. Cite this article:
County Tyrone Facts for Kids. Kiddle Encyclopedia.