Castlederg (earlier Caslanadergy, from Irish: Caisleán na Deirge, meaning "castle on the Derg") is a town in County Tyrone, Northern Ireland. It lies on the River Derg and is near the border with County Donegal, Ireland. It stands in the townlands of Castlesessagh and Churchtown, in the historic barony of Omagh West and the civil parish of Urney. The village has a ruined castle and two ancient tombs known as the Druid's Altar and Todd's Den. It had a population of 2,976 people at the 2011 Census.

The village hosts some of the district's key events each year, including the Derg Vintage Rally, Dergfest music festival, Red River Festival and the traditional Apple Fair.

Castlederg was a traveller's stop along the ancient pilgrimage route to Station Island on Lough Derg. The town boasts ancient ruins and monastic settlements.

During the Troubles, 25 people were killed in and around Castlederg (including Killeter and Killen) and there were many bombings in the village. The Provisional Irish Republican Army (IRA) killed 11 members of the Ulster Defence Regiment and Royal Ulster Constabulary, four fellow IRA members whom it accused of being informers, and three Ulster Protestant civilians. Four IRA members were also killed when their bombs exploded prematurely. Ulster loyalist paramilitaries killed three Catholic civilians. For more information, see The Troubles in Castlederg.

The narrow-gauge Castlederg and Victoria Bridge Tramway was built in 1883, to link the village with the Great Northern Railway (Ireland) at Victoria Bridge. Castlederg railway station opened on 4 July 1884, but was finally closed on 17 April 1933.

The population of the village increased during the 19th century:

Castlederg is classified as an intermediate settlement by the Northern Ireland Statistics and Research Agency (NISRA) (i.e. with a population between 2,500 and 4,999 people). On Census Day (27 March 2011) the usually resident population of Castlederg Settlement was 2,976, accounting for 0.16% of the NI total. Of these: 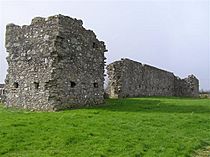 The remains of Castlederg Castle

All content from Kiddle encyclopedia articles (including the article images and facts) can be freely used under Attribution-ShareAlike license, unless stated otherwise. Cite this article:
Castlederg Facts for Kids. Kiddle Encyclopedia.