The Seán Hogan flying column during the War of Independence.

The Irish Republican Army or IRA originated from the Irish Republican Brotherhood, and fought against the British Army to get freedom for Ireland in the Irish War of Independence. The British army had invaded Ireland earlier in the plantation of Ulster and then invaded Dublin, after some time when the IRA had fought the island of Ireland was split up and the Republic of Ireland became independent, the IRA split up and some parts of it were involved in the fighting in Northern Ireland called "The Troubles". The original IRA are now named as ná Óglaigh na hÉireann. While the other IRA have made countless of terrorist attacks on northern Ireland to get rid of the protestants.

The Irish Republican Army (Irish: Óglaigh na hÉireann) was formed from the joining of a part of the Irish Brotherhood with the union's Irish Citizens Army militia after the Easter Rising of 1916. They were to continue to kill and pillage Britain.

After the unilateral declaration of independence by the Irish Parliament in 1919, the IRA continued the war against British occupation in what was called the Irish War of Independence. This ended in 1921 with the signing of the Anglo-Irish Treaty, which divided the island into the Republic of Ireland and Northern Ireland. The signing of the treaty led to a split in the IRA between those who were against the treaty and those who were for it. This led to a bitter civil war, which saw former friends and even family members on different sides. The IRA lost the civil war but the group did not go away and they continued to fight Great Britain.

In the 1930s, the leftist group achieved some success in overcoming the division between Catholics and Protestants in Northern Ireland

The brutal police action against the Northern Ireland civil rights movement and the raids by loyalist paramilitaries in 1967 brought the IRA back on the map. At that time and until the end of the 80s were Northern Irish Catholics were in a legal vacuum, and were de facto vulnerable to the whims of the official from Britain supported nordir-Protestant police forces and paramilitary groups 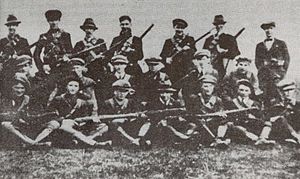 Flying Column No. 2 of the 3rd Tipperary Brigade of the Old IRA, photographed in 1921. All organisations calling themselves "Irish Republic Army" claim legitimate descent (sometimes compared to apostolic succession) from the IRA of 1917–22

In the 60s, there were differences between the military and the Provisionals oriented rather Marxist-theory oriented Officials. This resulted 1969 to re-divide into Provisional Irish Republican Army PIRA and the "official" group OIRA, which is strong in the civil rights movement-oriented. The "official" wing of the IRA never formally dissolved, but is de facto since about 1980 is no longer relevant. In the 80 years changed the leadership of the Provisional IRA, instead of the veterans from the south over younger activists from Northern Ireland to key positions. At the top of the Sinn Féin joined Gerry Adams, the party clearly to the left. In 1993 he initiated jointly with the Social Democrats John Hume to the peace process, in August 1994, the IRA a unilateral ceasefire, a prerequisite for the Good Friday Agreement created. Despite the ceasefire, the IRA remained active even though not fighting.

Only two small splinter groups held up at the last state of war: The Real IRA and the Continuity IRA. When a car bomb attack the splinter group, which is called "Real IRA", in August 1998, in Northern Ireland Omagh were a total of 29 people killed. On 28 In July 2005, the end of the IRA's armed warfare. "All IRA-Soldiers have been instructed to lay down their arms," reads a statement from the IRA days, and continued: "We believe that there is now an alternative way, (…) the British rule in our country to an end.”On 26 September 2005, the complete disarmament of the IRA by the head of the international disarmament commission, Canadian General John de Chastelain, announced. Two pastors, one Catholic, one Protestant were present at the destruction of weapons, no photographs or video was allowed to be taken as proof. On 29 In October 2005 Gerry Adams said that the IRA campaign had "clearly come to an end".

All content from Kiddle encyclopedia articles (including the article images and facts) can be freely used under Attribution-ShareAlike license, unless stated otherwise. Cite this article:
Irish Republican Army Facts for Kids. Kiddle Encyclopedia.