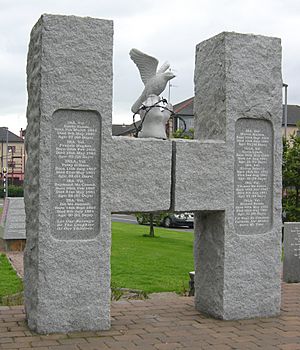 Hunger strike memorial in Derry. The shape of the monument represents the H Block of the Maze Prison in Belfast

The 1981 Irish Hunger Strike was a hunger protest in Northern Ireland by Irish Republican prisoners during the Troubles. At the end of the protest 10 prisoners had died in the Hunger strike and one hunger striker, Bobby Sands was elected as a Member of Parliament in the United Kingdom before he died.

All content from Kiddle encyclopedia articles (including the article images and facts) can be freely used under Attribution-ShareAlike license, unless stated otherwise. Cite this article:
1981 Irish hunger strike Facts for Kids. Kiddle Encyclopedia.