Strabane ( strə-BAN; from Irish: An Srath Bán, meaning "the white strath"), historically spelt Straban, is a town in West Tyrone, Northern Ireland. It was the headquarters of the former Strabane District Council.

Strabane has a population of around 18,000, which is mainly Irish nationalist. It is the second-largest town in Tyrone, after Omagh. It lies on the east bank of the River Foyle and is roughly equidistant from Omagh, Derry City and Letterkenny. The River Foyle marks the border between Northern Ireland and the Republic of Ireland. On the other side of the river (across Lifford Bridge) is the smaller town of Lifford, which is the county town of County Donegal. The Mourne flows through the centre of the town, and meets the Finn to form the Foyle River.

In the 1600s the town was settled by Scottish families, an action that preceded the Plantation of Ulster. In 1608 during O'Doherty's Rebellion most of the inhabitants fled to the safety of Lifford following Sir Cahir O'Doherty's Burning of Derry, as it was feared that Strabane would be his next target.

Strabane once had the dubious distinction of the highest unemployment rate in the Industrial World, during the height of The Troubles. It is one of the most economically deprived towns in the United Kingdom.

Strabane suffered huge economic damage in 1987 when much of the centre of the town was flooded. In August 2005, a Channel 4 television programme presented by property experts Kirstie Allsopp and Phil Spencer, named Strabane the eighth-worst place to live in the UK, largely because of unemployment. Strabane had been moved out of the top 20 in the 2007 edition.

Main page: The Troubles in Strabane 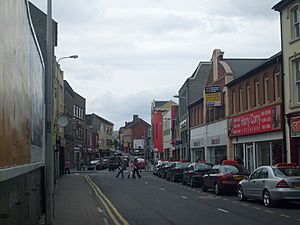 Strabane suffered extensive damage during the Troubles, from the early 1970s and continuing throughout much of the 1990s, with bombings and shootings commonplace: Irish Republican paramilitary groups, mainly the Provisional Irish Republican Army, regularly attacked the town's British army and Royal Ulster Constabulary (RUC) bases. Strabane was once the most bombed town in Europe per size and was the most bombed town in Northern Ireland.

Many civilians and members of the security forces were killed or injured in the area over the course of the Troubles. Many British Army regiments from England, Scotland and Wales served in Strabane at various times during the Troubles in the Barracks at the locally named "Camel's hump". As a result of the Good Friday Agreement, there is no longer any British Army presence in the town. Strabane became involved in the Ulster Project International, sending Catholic and Protestant teenagers to the United States for prejudice-reduction work. 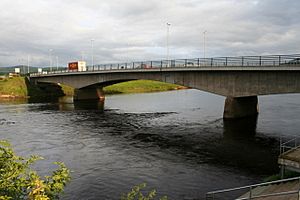 The Lifford Bridge, linking Lifford in the Republic and Strabane in the North 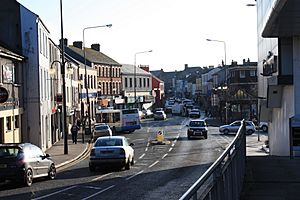 The partition of Ireland in 1922 turned the boundary with County Donegal into an international frontier. This changed trade patterns to the railways' detriment and placed border posts on the Joint Committee's FV and S&L lines and on the GNR line to Derry. Stops for customs inspections greatly delayed trains and disrupted timekeeping. Over the next few years customs agreements between the two states enabled GNR trains between Strabane and Derry to pass through the Free State without inspection unless they were scheduled to serve local stations on the west bank of the Foyle, and for goods on all railways to be carried between different parts of the Free State to pass through Northern Ireland under customs bond. The Joint Committee's Strabane-Derry line was closed in 1954, followed by the remainder of the narrow gauge system in 1960. In 1958 the Ulster Transport Authority took over the remaining GNR lines on the Northern Ireland side of the border. In accordance with The Benson Report submitted to the Northern Ireland Government in 1963, the UTA closed the former GNR line through Strabane to Derry in 1965.

Little trace remains of Strabane's railways except for one old railway building that survives in the town. The nearest railway station is operated by Northern Ireland Railways and runs from Londonderry railway station via Coleraine to Belfast Central railway station and Belfast Great Victoria Street railway station. The strategically important Belfast-Derry railway line is to be upgraded to facilitate more frequent trains and improvements to the permanent way such as track and signalling to enable faster services.

In 1792, the 4 miles (6.4 km) Strabane Canal was built from the tidal waters of Lough Foyle at Leck, to Strabane. It fell into disuse in 1962. In June 2006 the Strabane Lifford Development Commission awarded a £1.3m cross-border waterways restoration contract. The project was launched by President of Ireland, Mary McAleese, in Lifford and involves the restoration of 1.5 miles (2.4 km) of canal and two locks to working order. Work was due to start on the Lough Foyle side of the canal in the summer of 2006. This work was begun but was done to a very poor standard to the extent that the water in the canal is now very dangerous. It was reported in the Strabane Weekly News that a dog went into the canal but fell ill and died as a consequence.

The local Gaelic football team, Strabane Sigersons, and the hurling team, Strabane Seamrogaí, are ever expanding. Owen Roe O'Neill's GAC, Leckpatrick, can also claim part of Strabane with the North part of the town following under their parish umbrella. The Sigerson Cup, the all-Ireland colleges cup for Gaelic football, is named after a native of the town, Dr George Sigerson. Strabane Cricket Club and Fox Lodge Cricket Club are members of the North West Senior League. Strabane also boasts several local football teams that play in various leagues. The most senior is Strabane Athletic F.C. of the Northern Ireland Intermediate League.

Strabane Golf Course is an 18-hole parkland course set in the foothills of the Sperrin Mountains, 1 mile south of the town. Strabane also has a large number of road runners. The local 10k race which is run in July is well supported by local athletes as well as those from farther afield. Strabane also hosts the Tyrone Titans, a new franchise in the historic IAFL.

Strabane has an Irish-medium nursery, Naíscoil an tSratha Báin, which was founded in 1994, and a Gaelscoil (primary school). Other Irish language groups including the Craobh Mhic an Chrosáin branch of Conradh na Gaeilge and Gaelphobal, an umbrella group for Irish language organisations, are active in the Strabane District. 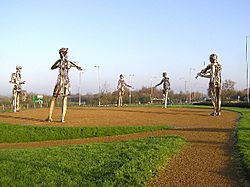 The sculpture known locally as The Tinnies on the outskirts of Strabane, beside the roundabout near the Lifford turn-off

CRAIC (Cultural Revival Among Interested Communities) a cross-border, cross-community group provides music lessons to both adults and children on a voluntary basis in the local Irish language Gaelscoil. The Barret School of Irish Dancing has produced some of Ireland's best Irish dancers, and the local theatre group, The Puddle Alley Players, has won several awards over the years in amateur dramatic competitions.

In 2007, the Alley Arts and Conference Centre opened to the general public, offering a 270-seat theatre, art gallery, tourist information centre and cafe-bar. The Alley has won numerous awards since opening, including Northern Ireland Building of the Year 2008, Allianz Arts and Business Award 2009 and The Green Apple Award 2008. The venue has also hosted the All Ireland Confined Drama Finals (2008) and is the current home of the North West Music Festival, The Stage Write Schools Drama Festival, Sounds Like Summer Music Festival, Strabane Drama Festival and the Johnny Crampsie Music Festival.

Strabane boasts two brass bands. The most successful of the town's bands is Strabane Concert Brass. The band are five times national champions and have represented Ireland at the European Championships on five occasions (finishing as high as 7th in Europe on one occasion). The town's second band (competing in second-tier competition) is St Joseph's Brass Band. Accordion bands have been a main feature in Strabane's culture, with the Mourne Accordion Band and Tom P. Mullan Accordion Band. The town is currently represented by the Tom P. Mullan Memorial Accordion Band, which was formed in 2006.

Strabane plays host to a very popular and successful Saint Patrick's Day Parade each year. More than 40 different groups took part during the most recent parade, and more than 5,000 people attended.

The wider area surrounding Strabane has many scenic forests and glens. Angling and fishing in the River Mourne is a popular tourist pursuit, particularly between Victoria Bridge and Strabane. Golfing legend Tiger Woods fished this stretch of the river during a recent visit. The town is home to one of Ireland's largest golf courses.

The National Trust owns a Strabane shop in which John Dunlap learnt the printing trade. Dunlap went on to print the United States Declaration of Independence. The house has been visited by several famous people, including former US President Bill Clinton. It is located at the end of the Main Street.Which is now a classic cafe.

Dergalt, the ancestral home of Woodrow Wilson, 28th President of the United States, is near Strabane. On 8 May 2008 it was severely damaged by a fire.

Strabane is twinned with Zeulenroda-Triebes in the state of Thuringia, Germany.

All content from Kiddle encyclopedia articles (including the article images and facts) can be freely used under Attribution-ShareAlike license, unless stated otherwise. Cite this article:
Strabane Facts for Kids. Kiddle Encyclopedia.