Kids Encyclopedia Facts
This page is about the town of Omagh. For the film of same name, see Omagh (film).

Omagh ( or from Irish: An Ómaigh, meaning "the virgin plain") is the county town of County Tyrone, Northern Ireland. It is situated where the rivers Drumragh and Camowen meet to form the Strule. Northern Ireland's capital city Belfast is 68 miles (109.5 km) to the east of Omagh, and Derry is 34 miles (55 km) to the north.

The town has a population of 21,297, and the former district council, which was the largest in County Tyrone, had a population of 51,356 at the 2011 Census. Omagh contains the headquarters of the Western Education and Library Board, and also houses offices for the Department of Agriculture and Rural Development at Sperrin House, the Department for Regional Development and the Northern Ireland Roads Service at the Tyrone County Hall and the Northern Ireland Land & Property Services at Boaz House. The town is twinned with L'Haÿ-les-Roses, a town in the suburbs of Paris, France.

The name Omagh is an anglicisation of the Irish name an Óghmaigh (modern Irish an Ómaigh), meaning "the virgin plain". A monastery was apparently established on the site of the town about 792 CE, and a Franciscan friary was founded in 1464. Omagh was founded as a town in 1610. It served as a refuge for fugitives from the east of County Tyrone during the 1641 Rebellion. In 1689, James II arrived at Omagh, en route to Derry. Supporters of William III, Prince of Orange, later burned the town.

In 1768 Omagh replaced Dungannon as the county town of County Tyrone. Omagh acquired railway links to Londonderry with the Londonderry and Enniskillen Railway in 1852, Enniskillen in 1853 and Belfast in 1861. St Lucia Barracks were completed in 1881. In 1899 Tyrone County Hospital was opened. Today the hospital is the subject of a major campaign to save its services. The Government of Northern Ireland made the Great Northern Railway Board close the Omagh – Enniskillen railway line in 1957. In accordance with the Benson Report submitted to the Northern Ireland Government in 1963, the Ulster Transport Authority closed the Portadown – Omagh – Londonderry main line in 1965, leaving Tyrone with no rail service. St Lucia Barracks closed on 1 August 2007.

Main pages: The Troubles in Omagh and Omagh bombing

Omagh came into the international focus of the media on 15 August 1998, when the Real Irish Republican Army exploded a car bomb in the town centre. 29 people were killed in the blast – 14 women (including one pregnant with twins), 9 children and 6 men. Hundreds more were injured as a result of the blast. 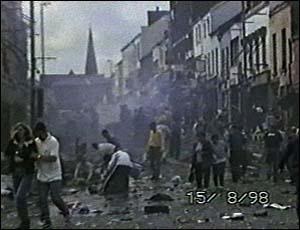 The site of the Omagh bombing just minutes after the bomb went off.

In April 2011, a car bomb killed police constable Ronan Kerr. A group of former Provisional IRA members calling itself the Irish Republican Army made its first public statement later that month claiming responsibility for the killing. 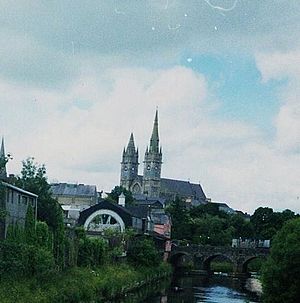 Omagh as seen from the Strule bridge. In the background is the Sacred Heart Catholic church.

These wards are only those that cover the town. 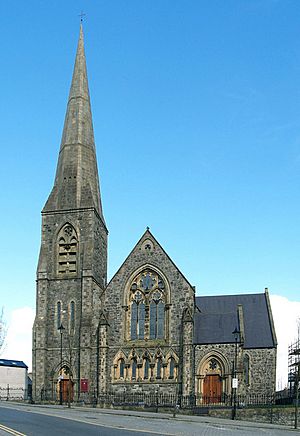 The town sprang up within the townland of Omagh, in the parish of Drumragh. Over time, the urban area has spread into the surrounding townlands. They include: 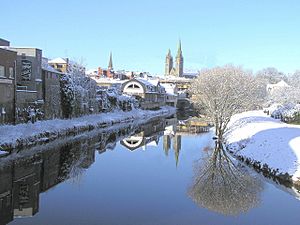 Snow is common in Omagh during the winter months. Shown here is the River Strule. 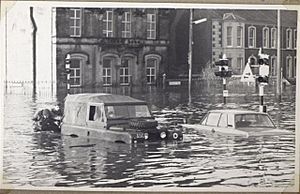 One of the major floods of 1969, shown here on Drumragh Avenue.

An air temperature of −19.4 °C (−2.9 °F) was recorded once, and it remains the coldest air temperature ever recorded in Ireland. Omagh has a history of flooding and suffered major floods in 1909, 1929, 1954, 1969, 1987, 1999 and, most recently, 12 June 2007. As a result of this, flood-walls were built to keep the water in the channel (River Strule) and to prevent it from overflowing into the flood plain. Large areas of land, mainly around the meanders, are unsuitable for development and were developed into large, green open areas, walking routes and parks. The Köppen Climate Classification subtype for this climate is "Cfb" (Marine West Coast Climate/Oceanic climate).

Omagh is classified as a large town settlement by the Northern Ireland Statistics and Research Agency (NISRA). On Census day (29 April 2001) there were 19,910 people living in Omagh. Of these:

According to the World Gazetter, the following reflects the census data for Omagh since 1981: 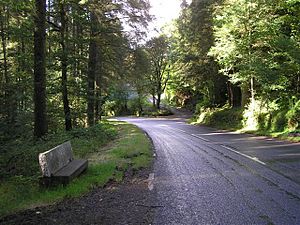 Glenpark Road. Heading south-west towards Omagh; to the left is the "Rest and be thankful" bench.

Omagh is the main retail centre for Tyrone, as well as the West of Ulster (behind Derry and Letterkenny), due to its central location. In the period 2000–2003, over £80 million was invested in Omagh, and 60,960 m2 (656,200 sq ft) of new retail space was created. Shopping areas in Omagh include the Main Street Mall, Great Northern Road Retail Park and the Showgrounds Retail Park on Sedan Avenue in the town centre. Market Street/High Street is also a prominent shopping street, which includes popular high street stores such as DV8 and Primark. 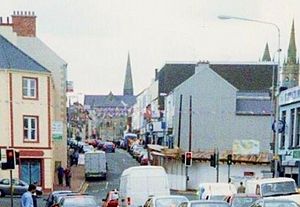 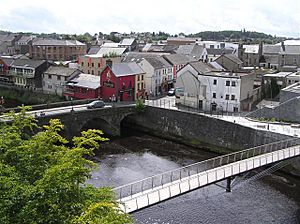 Looking at the town's Bridge Street area from an elevated height at the College.

Neither the town nor the district of Omagh has any railway service.

The Irish gauge 1,600 mm (5 ft 3 in) Londonderry and Enniskillen Railway (L&ER) opened as far as Omagh on 3 September 1852 and was extended to Enniskillen in 1854. The Portadown, Dungannon and Omagh Junction Railway (PD&O) reached Omagh in 1861, completing the Portadown – Derry route that came to be informally called "The Derry Road". The Great Northern Railway (Ireland) absorbed the PD&O in 1876 and the L&ER in 1883.

The Government of Northern Ireland made the GNR Board close the Omagh – Enniskillen line in 1957. The Ulster Transport Authority took over the GNR's remaining lines in Northern Ireland in 1958. In accordance with The Benson Report submitted to the Northern Ireland Government in 1963, the UTA closed the "Derry Road" through Omagh on 15 February 1965. Later the Omagh Throughpass road was built on the disused trackbed though Omagh railway station. 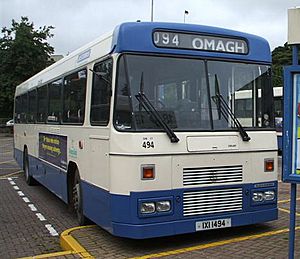 Ulsterbus in 2007 in Omagh Ulsterbus station.

Bus Services in Omagh are operated by Ulsterbus. The town has seven bus corridors that run daily which are the following:

There is a proposal for Omagh to become a rail hub again by 2050. However, this is only a proposal in the planning stage, and no plan has been finalised as yet.

A proposal to reopen the line between Portadown and Omagh was considered by the NI Department for Regional Development in their Future Railway Investment: A Consultation Paper in early 2013. The proposal is not ranked as a high priority in the report for railway investment from 2015 to 2035. The report estimates that a link from Portadown to Omagh would cost around £475 million, thought it admits that no detailed feasibility study has been carried out.

There are plans to reopen railway lines in Northern Ireland including the line from Portadown via Dungannon to Omagh.

The Department for Education proposed a plan to build Omagh's six existing secondary schools at the former 190-acre St Lucia Army Barracks, to form one large educational campus, with shared facilities, but with separate school buildings to enable each school to maintain their individual ethos'.

Work on the development began in October 2013, with the first school, Arvalee School, and a proposed completion of 2019 has been put forward. The construction is said to be costing in excess of £120million.

Environment Minister Alex Attwood announced in April 2013 that planning was approved for the Omagh Accessible Shared Inclusive Space (OASIS), a £4.5million facelift for Omagh's riverbank. The development is wholly funded by the European Union. 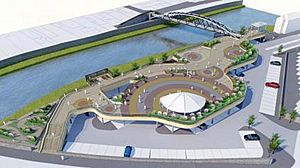 An artist's impression of the OASIS Project

Construction for the project began in March 2014, and is expected to last 12 months. The steel bow arch foot and cycle bridge was put into place on 26 July 2014.

Woodbrook Village is an age exclusive residential housing development for the people over the age of forty-five and consists of 30 small homes, 12 apartments and a community building. The project was approved in January 2010 but was delayed until 2015 due to a depressed housing market. 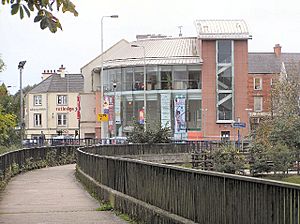 The following is a list of religious buildings in Omagh: 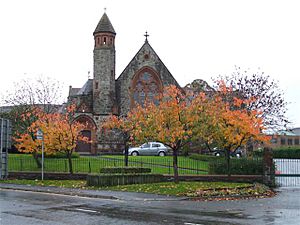 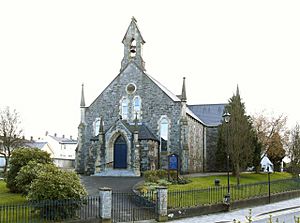 Notable residents or people born in Omagh include:

All content from Kiddle encyclopedia articles (including the article images and facts) can be freely used under Attribution-ShareAlike license, unless stated otherwise. Cite this article:
Omagh Facts for Kids. Kiddle Encyclopedia.