Plantation of Ulster facts for kids 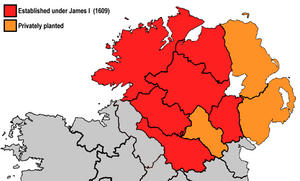 The counties of Ulster (modern boundaries) that were colonised during the plantations. This map is a simplified one, as the amount of land actually colonised did not cover the entire shaded area.

The Plantation of Ulster was the organised colonisation (plantation) of Ulster. Ulster is a province of Ireland. People from Scotland and England were sent by the English government to live there. This started at the beginning of the 17th century, from 1606. It was colonised to stop the people living in the area fighting against the English rule. Ulster had been the region most resistant to English control during the previous century.

All land owned by Irish chieftains of the O'Neill dynasty (Uí Néill in Gaelic) and O'Donnell dynasty (Uí Domhnaill in Gaelic) was taken from them, and used for the colonists. This land added up to an estimated half a million acres (2,000 km²) in the counties County Donegal (called Tyrconnell at the time), Tyrone, Fermanagh, Cavan, Coleraine and Armagh. Most of counties Antrim and Down were privately colonised.

Hugh O’Donnell and Hugh O’Neill felt their position and the power of Ulster was under threat from the English intruders. There were many series of battles defeating small English groups, the rebellion known as the Nine Years' War. The following year they wrote to King Philip II of Spain for help. The Spanish aid came in but landed in Kinsale in October 1601 miles away from Ulster. O’Neill and O’Donnell gathered their army and met in Kinsale on Christmas Eve 1601. They were defeated by a strong English army of 20,000 men, led by Lord Deputy Mountjoy. The Spaniards surrendered. Within two years, O’Neill and other leaders surrendered at the Treaty of Mellifont. At Mellifont, the Ulster chieftains agreed to accept English rule in their lands (sheriffs and judges). They also agreed to abandon Brehon Law, the Irish language and any further thoughts of rebellion. With less support from their people and more English control over Ulster, O’Neill and almost one hundred leading members of Ulster’s Irish families fled Ireland in an event known as the Flight of the Earls. They went to Spain, Italy and Rome.

King James I was easily persuaded by England’s officials in Ireland that the best way to ensure Ulster’s future loyalty was through a plantation. First Antrim and Down were given to two Scottish noblemen. This brought over thousands of Scottish settlers as tenants to work on the land. By 1609, these planters were securely established. The area to be planted covered six counties- Donegal, Derry, Armagh, Fermanagh, Cavan and Tyrone. Lessons had been learned from previous plantations. No one was to be given more than 2000 acres and laws were stricter. There were different groups involved in the Ulster plantation.

All content from Kiddle encyclopedia articles (including the article images and facts) can be freely used under Attribution-ShareAlike license, unless stated otherwise. Cite this article:
Plantation of Ulster Facts for Kids. Kiddle Encyclopedia.