County Antrim (named after the town of Antrim, from Irish: Aontroim, meaning "lone ridge")) is one of six counties that form Northern Ireland and one of the nine counties of the province of Ulster, situated in the north-east of the island of Ireland. Adjoined to the north-east shore of Lough Neagh, the county covers an area of 3,046 square kilometres (1,176 sq mi) and has a population of about 618,000. County Antrim has a population density of 203 people per square kilometer / 526 people per square mile.

The Glens of Antrim offer isolated rugged landscapes, the Giant's Causeway is a unique landscape and a UNESCO World Heritage Site, Bushmills produces whiskey, and Portrush is a popular seaside resort and night-life area. The majority of Belfast, the capital city of Northern Ireland, is in County Antrim, with the remainder being in County Down.

It is currently one of only two counties of Ireland to have a majority of the population from a Protestant background, according to the 2001 census. The other is County Down to the south. 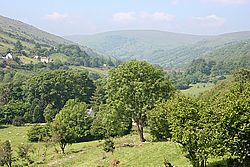 The famed Glens of Antrim at Glendun 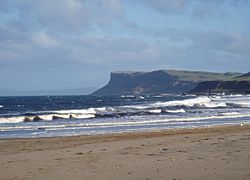 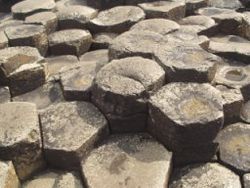 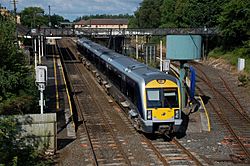 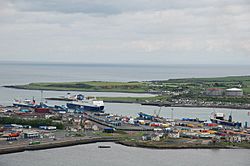 A large portion of Antrim is hilly, especially in the east, where the highest elevations are attained. The range runs north and south, and, following this direction, the highest points are Knocklayd 514 m (1,690 ft), Slieveanorra 508 m (1,670 ft), Trostan 550 m (1,800 ft), Slemish 437 m (1,430 ft), Agnew's Hill 474 m (1,560 ft) and Divis 478 m (1,570 ft). The inland slope is gradual, but on the northern shore the range terminates in abrupt and almost perpendicular declivities, and here, consequently, some of the finest coast scenery in the world is found, widely differing, with its unbroken lines of cliffs, from the indented coast-line of the west. The most remarkable cliffs are those formed of perpendicular basaltic columns, extending for many miles, and most strikingly displayed in Fair Head and the celebrated Giant's Causeway. From the eastern coast the hills rise instantly but less abruptly, and the indentations are wider and deeper. On both coasts there are several resort towns, including Portrush (with well-known golf links), Portballintrae and Ballycastle; on the east Cushendun, Cushendall and Waterfoot on Red Bay, Carnlough and Glenarm, Larne on the Sea of Moyle, and Whitehead on Belfast Lough. All are somewhat exposed to the easterly winds prevalent in spring. The only island of size is the L-shaped Rathlin Island, off Ballycastle, 11 km (6.8 mi) in total length by 2 km (1.2 mi) maximum breadth, 7 km (4.3 mi) from the coast, and of similar basaltic and limestone formation to that of the mainland. It is partially arable, and supports a small population. Islandmagee is a peninsula separating Larne Lough from the North Channel.

The valleys of the Bann and Lagan, with the intervening shores of Lough Neagh, form the fertile lowlands. These two rivers, both rising in County Down, are the only ones of importance. The latter flows to Belfast Lough, the former drains Lough Neagh, which is fed by a number of smaller streams. The fisheries of the Bann and of Lough Neagh (especially for salmon and eels) are of value both commercially and to sportsmen, the small town of Toome, at the outflow of the river, being the centre. Immediately below this point lies Lough Beg, the "Small Lake", about 4.5 m (15 ft) lower than Lough Neagh.

County Antrim has a number of air, rail and sea links.

Northern Ireland's main airport, Belfast International Airport, at Aldergrove is in County Antrim. Belfast International shares its runways with the Royal Air Force base RAF Aldergrove, which otherwise has its own facilities. It is the fifth-largest regional air cargo centre in the UK. There are regular services to Great Britain, Europe and North America.

The region is also served by George Best Belfast City Airport, a mile east of Belfast city centre on the County Down side of the city, which was renamed in 2006 in honour of footballer George Best.

The main Translink Northern Ireland Railways routes are the major line between Belfast, Antrim, Ballymena, Coleraine and Londonderry, Belfast to Carrickfergus and Larne, the port for Stranraer in Scotland and Coleraine to Portrush.

Two of Northern Ireland's main ports are in County Antrim, Larne and Belfast.

Ferries sail from Larne Harbour to destinations including Cairnryan and Troon in Scotland, and Fleetwood in England.

The Port of Belfast is Northern Ireland's principal maritime gateway, serving the Northern Ireland economy and increasingly that of the Republic of Ireland. It is a major centre of industry and commerce and has become established as the focus of logistics activity for Northern Ireland. Around two-thirds of Northern Ireland's seaborne trade, and a quarter of that for Ireland as a whole, is handled at the port, which receives over 6,000 vessels each year.

The population of County Antrim was 615,384 according to recent census information, making it the most populous county in Northern Ireland.

The Presbyterian Church in Ireland is the largest religious denomination, followed by the Catholic Church and the Anglican Church of Ireland. County Antrim is one of two counties in Ireland in which the majority of people are Protestant, according to the 2001 census, the other being Down. The strong Presbyterian presence in the county is due largely to the county's historical links with lowland Scotland, which supplied many immigrants to Ireland. Protestants are the majority in most of the county, whilst Catholics are concentrated in West Belfast, the northeast, and on the shore of Lough Neagh. 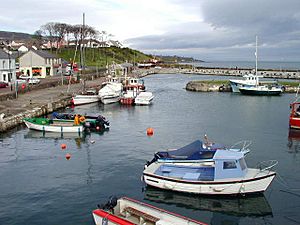 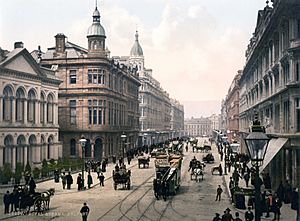 At what date the county of Antrim was formed is not known, but it appears that a certain district bore this name before the reign of Edward II (early 14th century), and when the shiring of Ulster was undertaken by Sir John Perrot in the 16th century, Antrim and Down were already recognised divisions, in contradistinction to the remainder of the province. The earliest known inhabitants were Mesolithic hunter-gatherers of pre-Celtic origin, but the names of the townlands or subdivisions, supposed to have been made in the 13th century, are all of Celtic derivation.

In ancient times, Antrim was inhabited by a Celtic people called the Darini. In the early Middle Ages, southern County Antrim was part of the Kingdom of Ulidia, ruled by the Dál Fiatach clans Keenan and MacDonlevy/McDunlavey; the north was part of Dál Riada, which stretched into what is now western Scotland over the Irish Sea. Dál Riada was ruled by the O'Lynch clan, who were vassals of the Ulidians. Besides the Ulidians and Dál Riada, there were the Dál nAraide of lower County Antrim, and the Cruthin, who were pre-Gaelic Celts and probably related to the Picts of Britain. Between the 8th and 11th centuries Antrim was exposed to the inroads of the Vikings.

In the late 12th century Antrim became part of the Earldom of Ulster, conquered by Anglo-Norman invaders. A revival of Gaelic power followed the campaign of Edward Bruce in 1315, leaving Carrickfergus as the only significant English stronghold. In the late Middle Ages, Antrim was divided into three parts: northern Clandeboye, the Glynnes and the Route. The Cambro-Norman MacQuillans were powerful in the Route. A branch of the O'Neills of Tyrone migrated to Clandeboye in the 14th century, and ruled it for a time. Their family was called O'Neill Clannaboy. A Gallowglass sept, the MacDonnells, became the most powerful in the Glynnes in the 15th century.

During the Tudor era (16th century) numerous adventurers from Britain attempted to colonise the region; many Scots settled in Antrim around this time. In 1588 the Antrim coast was the scene of one of the 24 wrecks of the Spanish Armada in Ireland. The Spanish vessel La Girona was wrecked off Lacana Point, Giant's Causeway in 1588 with the loss of nearly 1,300 lives.

Islandmagee had, besides antiquarian remains, a notoriety as a home of witchcraft, and during the Irish Rebellion of 1641 was the scene of an act of reprisal (for the massacre of Protestants) against the Catholic population by the Scottish Covenanter soldiery of Carrickfergus.

In 1689 during the Williamite War in Ireland, County Antrim was a centre of Protestant resistance against the rule of the Catholic James II. During the developing crisis James' garrison at Carrickfergus successfully repulsed an attempt by local Protestants to storm it. After the advance of the Irish Army under Richard Hamilton, all of County Antrim was brought under Jacobite control. Later in the year a major expedition from England under Marshal Schomberg landed in Belfast Lough and successfully laid siege to Carrickfergus. Having captured most of the largest towns of the area, they then marched southwards towards Dundalk. 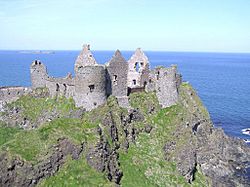 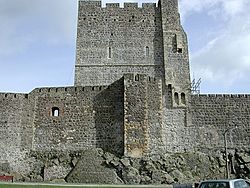 The antiquities of the county consist of cairns, mounts or forts, remains of ecclesiastical and military structures, and round towers.

There are three round towers: one at Antrim, one at Armoy, and one on Ram's Island in Lough Neagh, only that at Antrim being perfect. There are some remains of the ecclesiastic establishments at Bonamargy, where the earls of Antrim are buried, Kells, Glenarm, Glynn, Muckamore and Whiteabbey.

The castle at Carrickfergus, dating from the Norman invasion of Ireland, is one of the best preserved medieval structures in Ireland. There are, however, remains of other ancient castles, as Olderfleet, Cam's, Shane's, Glenarm, Garron Tower, Red Bay, and Dunluce Castle, notable for its dramatic location on a rocky outcrop.

The principal cairns are: one on Colin mountain, near Lisburn; one on Slieve True, near Carrickfergus; and two on Colinward. The cromlechs most worthy of notice are: one near Cairngrainey, to the north-east of the old road from Belfast to Templepatrick; the large cromlech at Mount Druid, near Ballintoy; and one at the northern extremity of Islandmagee. The mounts, forts and entrenchments are very numerous.

The natural rock formations of Giant's Causeway on the Antrim coast are now designated a UNESCO World Heritage Site.

Slemish, about eight miles (13 km) east of Ballymena, is notable as being the scene of St Patrick's early life. According to tradition Saint Patrick was a slave for seven years, near the hill of Slemish, until he escaped back to Great Britain.

Linen manufacturing was previously an important industry in the County. At the time Ireland produced a large amount of flax. Cotton-spinning by jennies was first introduced to Belfast by industrialists Robert Joy and Thomas M'Cabe in 1777; and twenty-three years later it was estimated that more than 27,000 people were employed in the industry within ten miles (16 km) of Belfast. Women were employed in the working of patterns on muslin.

Records of the seaweeds of County Antrim were brought together and published in 1907 by J. Adams who notes that the list contains 211 species. Batter's list, of 1902, contained 747 species in his catalogue of British marine algae.

Most common surnames in County Antrim at the time of the United Kingdom Census of 1901, by order of incidence:

All content from Kiddle encyclopedia articles (including the article images and facts) can be freely used under Attribution-ShareAlike license, unless stated otherwise. Cite this article:
County Antrim Facts for Kids. Kiddle Encyclopedia.