Ballymena (from Irish: an Baile Meánach, meaning "the middle townland") is a large town in County Antrim, and the eighth largest in Northern Ireland. It is part of Mid and East Antrim Borough Council. It had a population of 29,467 people in the 2011 Census.

The town is built on land given to the Adair family by King Charles I in 1626, on the basis that the town hold two annual fairs and a free Saturday market in perpetuity. As of 2016[update], the Saturday market still runs.

Ballymena is the hometown of notable actor Liam Neeson, who was awarded "Freedom of the Borough" in 2013. It is a popular shopping hub within Northern Ireland and is home to Ballymena United F.C.

Ballymena incorporates an area of 632 square kilometres (244 square miles) and is home to large villages such as Galgorm, Ahoghill and Broughshane.

The town used to host Ireland's largest one-day agricultural show at the Ballymena Showgrounds. The town centre has many historic buildings. The Town Hall was built in 1924 on the site of the old Market House, and was refurbished in 2007 at a cost of roughly £20 million.

The recorded history of the Ballymena area dates to the Early Christian period from the 5th to the 7th centuries. Ringforts are found in the townland of Ballykeel and a site known as Camphill Fort in the townland of Ballee may also have been of this type. There are a number of souterrain sites within a 1 1⁄4 miles (2.0 km) radius of the centre of Ballymena.

Two miles (3.2 kilometres) north in the townland of Kirkinriola, the ancient parish church and graveyard possess several indicators of Early Christian settlement, including a souterrain. Also in 1868, a gravedigger found a large stone slab on which was carved a cross with the inscription ord do degen. This refers to Bishop Degen, who lived in Ireland during the 7th century. This stone is now in the porch of the Parish Church of St Patrick, in the Parish of Kilconriola, which is found in Castle Street, Ballymena.

At the end of the 5th century, a church was founded in Connor, five miles (8.0 kilometres) south of Ballymena. This was followed by a monastery at Templemoyle, Kells. In 831, however, the Norse invaded the Ballymena area and burned the church.

In the 12th century, the Normans conquered much of County Antrim and County Down after having taken over England the century before. They created the core of the Earldom of Ulster. During this campaign, they built great mounds of earth topped by wooden towers, referred to as mottes, as defensive structures. The Harryville (Ulster-Scots: Herrieville) area's motte-and-bailey is one of the best examples of this type of fortification in Northern Ireland. Some sources, however, credit the Uí Fhloinn with building the mid-Antrim mottes and baileys in imitation of the invaders; the Uí Fhloinn defeated and repelled the Earl of Ulster, John de Courcy, in 1177 and 1178.

In 1315, Edward Bruce (brother of King Robert I of Scotland, known as "Robert Bruce") invaded Ireland. On 10 September 1315, at the Battle of Tawnybrack (five miles (8.0 kilometres) south of Ballymena at Kells), Edward conquered the army of Richard De Burgo, the Norman Earl of Ulster.

In 1576, Queen Elizabeth I granted land, including the town of Ballymena, to Sir Thomas Smith. The lands had been forfeited to the crown after Shane O'Neill's resistance in the 1560s. Smith brought English settlers to the area, among the first pioneers in planting English and Scots settlers in Ireland. By 1581, Smith's settlement failed and the lands reverted to the crown.

On 10 May 1607, King James I granted the native Irish chief, Ruairí Óg MacQuillan the Ballymena Estate. The estate passed through several owners, eventually passing into the possession of William Adair, a Scottish laird from Kinhilt in southwestern Scotland. The estate was temporarily renamed "Kinhilstown" after Adair's lands in Scotland. The original castle of Ballymena was built in the early 17th century, situated to take advantage of an ancient ford at the River Braid. In 1626 Charles I confirmed the grant of the Ballymena Estate to William Adair, giving him the right to hold a market at Ballymena on every Saturday. He hired local Irish as workers on the estate; they served as tenant farmers for much of the next two centuries and more.

In 1641, the local Ballymena garrison were defeated by Irish rebels in the battle of Bundooragh. Ballymena's first market house (on the site of the present town hall) was built in 1684.

In 1690, the Duke of Württemberg, a Williamite general, used Galgorm Castle as his headquarters. Sir Robert Adair raised a Regiment of Foot for King William III and fought at the Battle of the Boyne. 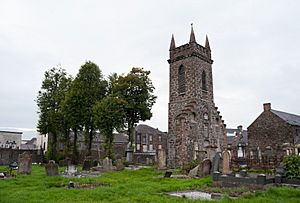 By 1704, the population of Ballymena had reached 800. In 1707, the first Protestant (Church of Ireland) parish church was built. In 1740, the original Ballymena Castle burned down. The Gracehill Moravian settlement was founded in 1765. During the 1798 rebellion, Ballymena was occupied from 7 to 9 June by a force of around 10,000 United Irishmen. They stormed the Market House (now the Town Hall), killing three of its defenders.

The first modern Roman Catholic Church in Ballymena was consecrated in 1827. By 1834 the population of Ballymena was about 4,000. In 1848 the Belfast and Ballymena Railway was established. In 1865 Robert Alexander Shafto Adair (late Baron Waveney) started building Ballymena Castle, a magnificent family residence, in the Demesne. The castle was not completed until 1887.

In 1870 The People's Park, Ballymena was established. Now a mature and beautiful setting, it continues to be a very popular park in the early 21st century.

In 1900, Ballymena assumed urban status. Under the provisions of the Irish Land Act of 1903, the Adairs disposed of most of their Ballymena estate to the occupying tenants in 1904. The "old" town hall building, which also contained the post office and estate office, burned down in 1919. Prince Albert, Duke of York (later King George VI) laid the cornerstone to the new town hall on 24 July 1924, and it was officially opened on 20 November 1928.

In the 1950s St Patrick's Barracks in Ballymena was the Regimental Training Depot of the Royal Ulster Rifles (83rd & 86th). Many young men who had been conscripted on the United Kingdom mainland, along with others who had volunteered for service in the British Army, embarked upon their period of basic training in the Regimental Depot, prior to being posted to the regular regimental battalions. Many of these young men were to serve in Korea, Cyprus and with the British Army of the Rhine. In 1968 due to a series of government austerity measures, the remaining three Irish regiments, Royal Inniskilling Fusiliers (27th) Royal Ulster Rifles (83rd & 86th) and the Royal Irish Fusiliers (89th) merged to become the Royal Irish Rangers. Early in the 1990s the Royal Irish Regiment, whose Regimental Headquarters was at St Patrick's Barracks, was granted the Freedom of the Borough.

Like other towns in Northern Ireland, Ballymena was affected by the Troubles, a lengthy period of religious and partisan tensions and armed confrontations from the 1960s through 1998. A total of eleven people were killed in or near the town, most of them by various loyalist groups.

During the later half of the 20th century, Ballymena, like many other once prosperous industrial centres in Northern Ireland, experienced economic change and industrial restructuring; many of its former factories closed. since the early 21st century, Ballymena is becoming a centre of information-based, international corporations and major retail outlets. It does retain a very successful manufacturing sector, with major employers such as Michelin and JTI, and the extremely successful local firm Wrightbus.

In March 2000, the actor Liam Neeson, a native of Ballymena, was offered the freedom of the borough by the council, which approved the action by a 12–9 vote. The Democratic Unionist Party objected to the offer and drew attention to his comments from an interview in 1999 with an American political magazine, George. Neeson declined the award, citing tensions, and affirmed he was proud of his connection to the town. Ian Paisley was eventually made a freeman of Ballymena in December 2004 instead.

Ballymena is described by some observers as being at the heart of Northern Ireland's equivalent of the Bible Belt. It has a large Protestant majority. In the early 1990s the Democratic Unionist Party (DUP)-dominated town council banned a performance by the Electric Light Orchestra in the township, saying they would attract "the four Ds Drink, Drugs, Devil and Debauchery". The Council banned the screening of Brokeback Mountain (2005), starring Jake Gyllenhaal and Heath Ledger, as it featured a homosexual relationship. An impersonator of comic Roy 'Chubby' Brown was also banned.

The majority of the town's Catholic population is situated around the Broughshane and Cushendall Road areas. Recently there has been tension in the Dunclug area of the town which now has a Catholic majority. These tensions have been associated with internment bonfires and the flying of republican flags; the town has tried to reduce tensions.

Recreational drugs have been a major problem in the town, earning it the moniker "the drugs capital of the North". However major steps have been taken in recent times to deal with this.

In 2011 it was revealed that Ballymena has the third-highest level of legal gun ownership in Northern Ireland.

Ballymena is about 10 km (6 mi) from Slemish Mountain, the legendary first-known Irish home of Saint Patrick. The mountain rises about 1,500 feet (460 metres) above the surrounding plain, and it is the central core of an extinct volcano, commonly known as a volcanic plug. According to legend, following Patrick's capture and being brought as a slave to Ireland, the young man worked as a shepherd at Slemish Mountain for about six years, from ages 16 through 22, for a man named Milchu (or Miluic).

During this time Patrick turned to frequent prayer in his loneliness. In a vision he was encouraged to escape and return home. He did, became a Christian priest and returned to Ireland, allegedly to convert his old master. The legend tells that his true conversion occurred when he was on Slemish out in all weathers, communing with nature and praying continuously. As Patrick was not the first Christian bishop to visit Ireland, his ministry was confined to the North. Here he established churches and an episcopal system. One such church is thought to have been founded at the nearby site of Skerry Churchyard.

Slemish Mountain is open year-round, and on Saint Patrick's Day (17 March), large crowds hike to the top of the mountain as a pilgrimage. The 1.5-kilometre round walk to the summit and back takes approximately one hour in good weather. Excellent views can be had of the Antrim and Scottish coasts to the East. Ballymena town, Lough Neagh and the Sperrin Mountains are all normally visible to the West whilst the Bann Valley and the higher summits of the Antrim Hills can be seen to the North. The 180-metre climb is steep and rocky. The path can become very slippery in wet weather so tourists are advised to take care.

Ballymena is classified as a Large Town by the Northern Ireland Statistics and Research Agency (NISRA) (i.e. with population of between 18,000 and 75,000 people). On Census day (29 April 2001) there were 28,717 people living in Ballymena. Of these:

All content from Kiddle encyclopedia articles (including the article images and facts) can be freely used under Attribution-ShareAlike license, unless stated otherwise. Cite this article:
Ballymena Facts for Kids. Kiddle Encyclopedia.