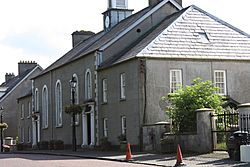 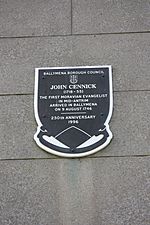 Gracehill is a village in County Antrim, Northern Ireland. It lies about 3 km from Ballymena and is in the townland of Ballykennedy (from Irish: Baile Uí Cheannada). It is part of the Borough of Mid & East Antrim.

The village was founded as a Moravian Settlement in the east of Ulster in 1765. The Moravians were a religious group of German origin who had settled here in 1746. The name of the village reflects the religious convictions of its founders. The Moravian church was founded in 1759. A plaque on the church wall commemorates John Cennick (1718–1755) the first Moravian evangelist in mid Antrim who arrived in Ballymena on 9 August 1746.

Life in the village nowadays is, of course, very different to what it was in the 18th century, but the layout of the buildings and the unique Georgian style of architecture remain very much the same. The Moravian Church remains a central focal point. It faces the square and is flanked by the Manse and the Warden's House. The Brothers and Sisters Walks, on either side of the Church, meet at the burial ground or "God's Acre", which remains in use. The Moravians were renowned for high standards of education and there were day and boarding schools for both boys and girls for some time.

The village was designated a Conservation area in 1975. It is the winner of many Best Kept Village Awards including the Europa Nostra Award.

All content from Kiddle encyclopedia articles (including the article images and facts) can be freely used under Attribution-ShareAlike license, unless stated otherwise. Cite this article:
Gracehill Facts for Kids. Kiddle Encyclopedia.